Skip to content
Become a member and get exclusive access to articles, live sessions and more!
Start Your Free Trial
Home > Features > Catching Up With the Manhattan Transfer 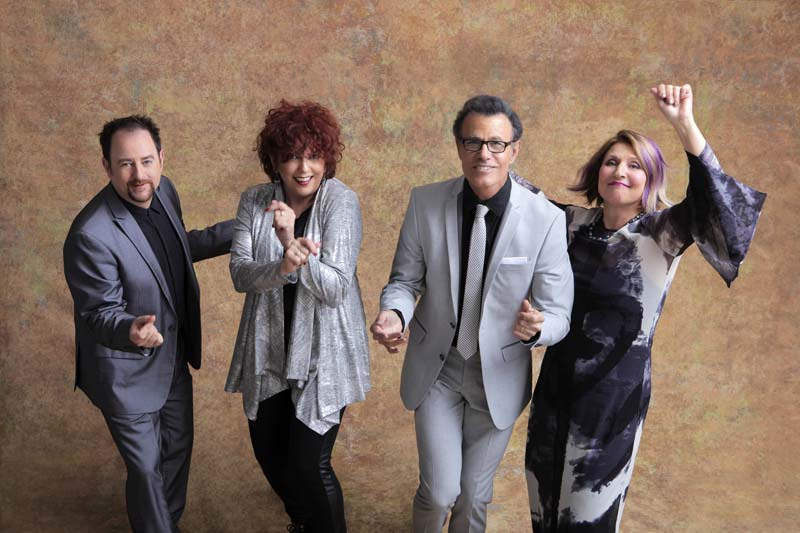 Even within the jazz milieu, one of the few art forms where longevity is more norm than exception, Tim Hauser’s legacy is remarkable. Hauser, who died in October 2014 at age 72 after a lengthy battle with cancer, was the driving force behind the Manhattan Transfer. He founded the group as a quintet in 1969, and then reshaped it as a quartet three years later, alongside Janis Siegel, Alan Paul and Laurel Massé. Remarkably, the foursome saw just one line-up change, in 1978, when Cheryl Bentyne replaced Massé.

Determined that his health issues not disrupt the group’s exhaustive touring schedule, Hauser remained fully active until late 2013, when he was sidelined by back surgery. The other three members began casting about for a sub and, as Bentyne remembers, “I called Claude McKnight from Take 6 and said, ‘We need a bass. What are your thoughts?’ He said, ‘Well, the guy from [the L.A.-based a cappella group] m-pact, Trist Curless, is fantastic. He reads well, he has great ears and he could pick up your stuff in a second.’ So I called Trist and he said, ‘I’d love it.'”

After a few months, Curless-also an accomplished sound engineer who has worked with Take 6, Straight No Chaser, New York Voices and Pentatonix-returned to his myriad responsibilities and Hauser rejoined the group. “Tim was such a trouper,” Paul says. “He was old-school, didn’t want to stop or let us down, and was in a lot of denial about what he could and couldn’t do.” During a show in South Orange, N.J., Siegel recalls, “Tim wasn’t holding the notes and wasn’t moving around. He went right to bed afterward and was late the next morning, which he never was, and said, ‘I can’t breathe.'” The foursome boarded their bus, headed for Corning, N.Y., and “he was really bad,” Bentyne says. “He lay on the front seat, curled up and sleeping. We had a doctor waiting for him, and he was taken straight to Emergency. He missed the show, and for the first time ever we performed as a trio. By pure happenstance, Trist was doing sound for Pentatonix one town over. We picked him up at a gas station and said, ‘We need you tonight!’ He filled in and has just continued on with us.”

Hauser was transferred to a Pennsylvania healthcare facility where he died a few weeks later. Faced with the loss of their lodestar, the group was at a crossroads. Do they continue? Do they go their separate ways? “The first four or five months of performing were like a wake,” Siegel says, “[but] this thing Tim started is so ingrained; it has become the lifeblood of all of us. It just seemed right, despite how painful it has been, to try and continue [and] to keep Tim in mind always as the thread.” Adds Paul, “We pay honor to him every night, which is the thing we need to do. This was his baby.”

Meanwhile, all three continue to pursue solo careers. Siegel has two new albums: the stunningly beautiful Some Other Time, a tribute to Leonard Bernstein with Swedish trombonist and vocalist Nils Landgren; and as part of the Requinte Trio with pianist John di Martino and percussionist/vocalist Nanny Assis, the equally sublime, Brazilian-themed Honey and Air. Bentyne has gone back to earlier albums, recorded for Japan’s King label and never issued Stateside, to assemble the gorgeous compilation Lost Love Songs. And late last year Paul released Shu Bop, a vibrant salute to his vocal heroes from the 1950s. Poignantly, a cover of the Skyliners’ “Lonely Way” features Siegel, Bentyne and Hauser on backing vocals, marking the quartet’s last shared studio session.

Going forward, says Siegel, “The only thing that is going to help is working through the creative process together.” With that in mind, a new album is in the works, their first since 2009’s The Chick Corea Songbook. Describing it as a “very Transfer-ish record,” Bentyne says, “I can’t name names yet, but we’re going to do some collaborations and we’re writing some [material] and perhaps going back to some early stuff.” For Curless, “It’s pretty special. We’re just starting to figure out how we want things to go and finding a way to present to the world the fact that ‘Hey, the Manhattan Transfer is still going strong and is kind of the same, but somewhat new.’ Which is fine, because over the years, album to album, they’ve constantly reinvented themselves, like doing something as monumental as Vocalese and then taking a complete left turn and doing Brasil.” Early on, says Paul, the Transfer took its cue from David Bowie. “[He] would create a persona and then destroy it and move on to something else, and we figured we should do the same thing. That’s what we have in mind for this next album-breaking new ground, going somewhere new.”

When you’re on TV, everybody knows you, or at least thinks they know you. Take Kevin Eubanks, who was on NBC’s Tonight Show five nights … END_OF_DOCUMENT_TOKEN_TO_BE_REPLACED

Jimmy Katz leads many lives. He is the preeminent currently active jazz photographer, and has shot more than 200 magazine covers and over 600 recording … END_OF_DOCUMENT_TOKEN_TO_BE_REPLACED

Take a look at Blue Note Records’ release schedule for 2022 and it’s hard to miss the significant percentage of electronic-oriented music. In March, the … END_OF_DOCUMENT_TOKEN_TO_BE_REPLACED