Skip to content
Become a member and get exclusive access to articles, live sessions and more!
Start Your Free Trial
Home > Features > Catching Up With Russell Malone 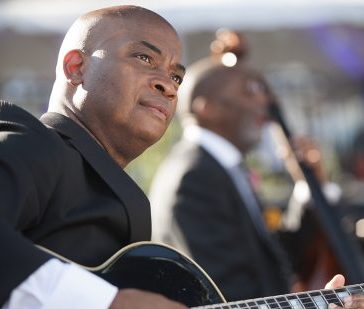 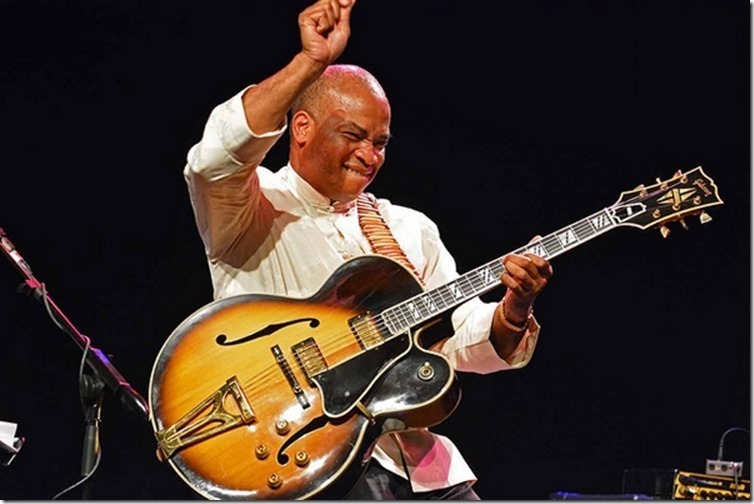 Russell Malone may be a jazz-guitar traditionalist in the spirit of Wes Montgomery, Kenny Burrell and late Jim Hall, but he’s no purist. The first tipoff is when he picks me up at the train station in Jersey City, a 10-minute drive from the handsome four-story row house he calls home. The car stereo in his immaculate, late-model black Volvo S80 is set to a SiriusXM station, but not a jazz one. It’s vintage soul, and the first song that hits me is Percy Sledge’s recording of “When a Man Loves a Woman,” which, coincidentally, Malone covers in a mellow-toned solo on his new album, All About Melody (HighNote).

“What other kinds of music do you listen to?” he asks. He is delighted when I mention various genres, including country. “You like country, too? I love country music,” says the Georgia-born musician, mentioning Glen Campbell (an early guitar hero), Ray Benson of Asleep at the Wheel and Willie Nelson. He ticks off other favorite genres, mentioning R&B, blues, classical and even smooth jazz, which he thinks gets a bad rap from critics. “I was never one of those musicians who looked down my nose at other types of music, or at musicians who play them,” he says. “I know a lot of jazz musicians who do that. But with a lot of them, if you take them out of the jazz context and put them in a situation where they have to play more simply, their egos and their virtuosity won’t allow them to do that. I was never one of those musicians. … I learned at an early age that Chuck Berry, B.B. King, Robert Johnson, Glen Campbell-they’re just as important as Charlie Christian, Wes Montgomery or any of these jazz players.”

After 30-odd years in the music business, during a career that has seen him play alongside Jimmy Smith, Harry Connick Jr., Diana Krall, Ron Carter, Benny Green, Ray Brown, Sonny Rollins and many others, Malone, 52, is now firmly established in the pantheon of great jazz guitarists. The new album, his 12th as a leader since 1992, features his meticulous yet soulful quartet: pianist Rick Germanson, drummer Willie Jones III and bassist Luke Sellick, the latest addition. They tackle an eclectic set list that includes jazz tunes like Freddie Hubbard’s “On the Real Side” (which Malone played on the trumpeter’s last recording) and Rollins’ jazz calypso “Nice Lady”; pop/R&B tunes like “Saving All My Love for You” and the aforementioned Sledge classic; an austere version of the sublime Dietz/Schwartz ballad “Haunted Heart” (Malone cites the indelible Bill Evans version as an inspiration); and a riff on the traditional Americana of “He’s Gone Away.” This grab-bag of songs really has only one thing in common: memorable melodies.

The album’s title could have applied to all of his albums, Malone notes. “I love melodies, and I love singers. I’m just as influenced by them as I am by instrumentalists. I try to do with my guitar what they do with their voices, including breathing. It’s very easy not to breathe when you’re playing a piano or guitar. You can play all these notes. … But I want that human quality. I take pride in that. A lot of people may consider that old hat. That’s fine; people like what they like. But knowing how to play lyrically has always been very important to me.”

There’s another thing he feels is essential: knowing how to accompany. “I do a lot of workshops, and I come across these young players; they’ve got chops for days, man. They can play over the weirdest harmony, they can play odd time signatures. And it’s cool that they can do that! But I listen to them, and then my test is to have them play for a vocalist. And that’s when all hell breaks loose! A lot of them can solo great, but they don’t know how to accompany a singer. They don’t know a lot of tunes, or even know how to comp in the rhythm section.

“So I say, listen, that other way of playing is great. I don’t want to suppress someone’s vision; they may be on to something unique. But the guitar is a rhythm section instrument. You’re gonna get hired based on your ability to fit in with the band and make them sound good. They don’t really care that much about how well you can solo.”

Malone and his friend, the brilliant Brazilian guitarist Romero Lubambo, regularly gig in a trio with vocalist Dianne Reeves that they call “Strings Attached.” “Russell is a beautiful player, and he listens,” Lubambo tells me. “I believe listening is the most important factor. I like duos with singers and piano players, because I like to listen and complement what’s happening. And Russell is like that too. He likes to listen and respond to whatever the other musicians throw at him.”

Malone also pays attention to the lyrics. “I’m always aware of the story, especially when I play a ballad,” he says. He learned that from Freddy Cole, who gave Malone one of his first gigs, some 30 years ago. “He drilled it into me to learn the lyrics, because it would help you play better.”

He illustrates the point with a story told to him by the great bassist Ray Brown, whose final trio Malone played in along with pianist Monty Alexander. One night when Brown was working with Oscar Peterson and Herb Ellis, saxophone icon Ben Webster was in the audience. “And you know Ben was a stickler for melody and lyrics,” Malone says. “They played a ballad, and I guess they played it well enough. But after they finished their set, Webster walked up to them and asked them if they knew the lyrics to that song. They didn’t. And he could tell. He told them that if they learned the lyrics they would play it better.”

Malone cites Kenny Burrell and Jim Hall as role models, especially in their attention to tone. Hall and Malone became close friends. Malone dedicates a tender original ballad to him on All About Melody, and includes a snippet of a voicemail message Hall once left for him. In it, the guitar great thanks him for his support through the years, especially when his health was failing, saying at one point, “Love you, man.” “I’ve learned as I’ve gotten older that if you have a great sound, you don’t have to play a lot of notes. These guys with really big sounds-like Ben Webster or Houston Person-nothing is overstated. I remember one time, about 20 years ago, me and [guitarist] Peter Bernstein were doing a tribute to Kenny. I thought we played pretty well that night. But then Kenny came out [he chuckles at the memory], and we played that Clifford Brown tune ‘Sandu.’ And Kenny played one note. And there was that big sound. He put us in our diapers that night, man. All we could do was shake our heads.

“It’s sound, man-that’s the first thing that people hear, before they even start to pay attention to the notes you’re playing. The sound of your instrument is your voice, man. … Just like Orson Welles, or James Earl Jones or Paul Robeson. What gets your attention is the sound. All the greats have it.”

OK, that’s funny, but it also implies a problem. People who dismiss the accordion as soon as they hear it, as soon as it triggers … END_OF_DOCUMENT_TOKEN_TO_BE_REPLACED