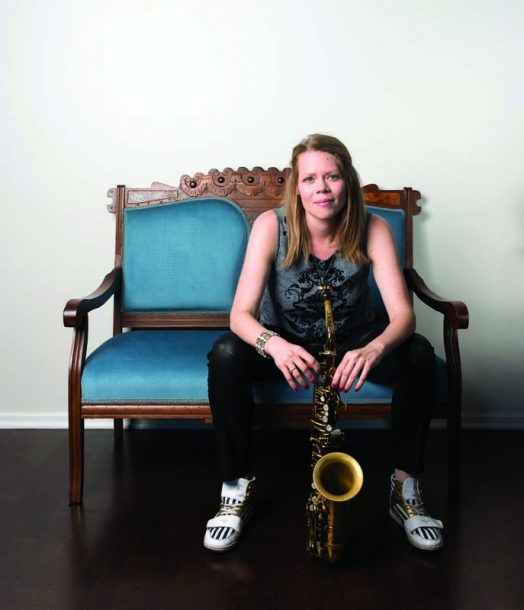 On Nov. 5, alto saxophonist Caroline Davis brought what might be called the Chicago sound to the Jazz Gallery in New York, in a celebration of her sophomore album as a leader, Doors: Chicago Storylines (Ears&Eyes). With a quartet of pianist Julian Shore, drummer Jay Sawyer and bassist Tamir Shmerling, Davis explored the full range of the saxophone with lithe maneuverings and a soft but round tone reminiscent of Chicago-born elder statesman Lee Konitz. But instead of soaring over the rhythm section, Davis’ instantaneous call-and-response opposite Shore’s rhythmic flourishes reflected the influence of collective improvisation established by the AACM and Chicago-rooted saxophonists Von Freeman and Steve Coleman. Still, rather than containing a geographically identifiable jazz aesthetic, the album asks whether Chicago, or any city, has a codified sound.

“I do feel a sense of Chicago in my playing, but I couldn’t really categorize that or describe it. It’s just an essence that I feel,” says the 34-year-old saxophonist, sitting down recently in SoHo. After eight years in Chicago, Davis moved to Brooklyn in 2013. “It would be the same for New York, too, but I like presenting multiple perspectives so it’s not so clean-cut.”

Taking a documentarian approach to defining Chicago’s jazz scene, Davis’ album seamlessly intersperses harmonically daring compositions and evocative interstitials into a sound collage of oral histories, resulting in a raw portrait of the city where she cut her teeth. Inspired by Glenn Gould’s Solitude Trilogy, Davis spent a year conducting interviews with fixtures on the scene-Art Davis, Ron Perrillo and Bobby Broom are among the 13 musicians featured-many of whom appear on the cover by Chicago-based collagist Jordan Martins. On “Golden Era,” the opening track, the iconic sound of the “L” train punctuates the overlapping voices. Recorded at Chicago’s Transient Sound, the album features a local quartet: guitarist Mike Allemana, bassist Matt Ferguson and drummer Jeremy Cunningham. It is undeniably the sound of Chicago, but not necessarily the Chicago sound.

On “Chicago Sound?” pianist Joan Hickey insists that “there is a Chicago sound,” “very blues-based” and not “so much about fast tempos,” a perspective challenged by Broom’s assertion that “this music isn’t made anywhere-it’s wherever it is.” Davis ultimately concluded that more than the confluence of history, politics and culture-including the jazz clubs-Chicago exists in the artists themselves: a tradition, a lineage and a scene that lives on in their stories.

These stories include the untimely death of bassist Carroll Crouch during a set at Chicago’s Bop Shop (the club’s owner framed his broken bow); tenor saxophonist Lin Halliday’s idiosyncratic style and in-the-pocket groove; and, most significant, the scene that coalesced around Von Freeman’s fabled jam session at the New Apartment Lounge.

Starting in the early ’80s until his death in 2012 at 88, Freeman performed an unabated two-hour set every Tuesday at the gritty club, a storied jazz institution on Chicago’s South Side, followed by a jam session that extended into the wee hours. The no-frills club’s jazz pedigree maintained a loyal following. Allegedly, Gene Ammons had his first gig there after his release from prison, a tenor battle with Sonny Stitt; whenever Roy Hargrove or Roy Haynes were in town, they would come to Freeman’s Tuesday night session. After moving to Chicago from Texas to pursue a PhD in music cognition at Northwestern University, Davis quickly became one of Freeman’s “horses,” a term of endearment he used for eager up-and-comers. “He would give me such encouragement,” Davis says of Freeman’s unorthodox mentoring process. “He never said anything about my playing; he would just tell me to check out certain songs, like, ‘Did you check out Lester Young’s solo on ‘Shoe Shine Boy’ yet?'”

In the spirit of intergenerational exchange, Allemana took part in the New Apartment Lounge jam throughout his 20s before joining Freeman’s group in 1995, and eventually met Davis. “Caroline just grew really fast on the scene. Her skill level, her approach, everything just blossomed,” Allemana says. Freeman’s teaching by example was instrumental to that growth. “Von never once made a set list or told me a chord. He rarely if ever told us the tune. If he did, it was in a veiled way. He’d say, ‘Three Bs,’ and that meant ‘Bewitched, Bothered and Bewildered.'”

Though the New Apartment Lounge has since shuttered, Davis carries on the tradition on “Rounds: For the Horses,” in which she transcribed the pitch of a recording of Freeman saying, “Where my horses at?,” his ritual introduction to the jam, into a five-note motif. “There’s a melody section and a series of chord changes based on those five notes, so it’s all related to that pitch structure and comes from that one phrase,” Davis says.

Doors: Chicago Storylines echoes an approach Davis adopted for her doctoral dissertation, “Semantic Knowledge for Eminent Jazz Performers,” for which she interviewed 50 professional musicians to gather data on how semantic memory, or the retrieval of facts and associations, reflected the formation of artistic communities. “It turns out that the people who were closer to each other, musically speaking, listened to music similarly,” Davis says. “If you said, ‘This reminds me of Erroll Garner,’ the person you would consider to be your musical partner would answer in the same way, almost exactly, which is fascinating.”

The album led to a similar conclusion, that more than shared geography, the Chicago sound emanates from a deep sense of community. “I really think that community structure is so important to jazz musicians,” she says. “We’re such a tiny little piece of the world, and we need each other.”

When you’re on TV, everybody knows you, or at least thinks they know you. Take Kevin Eubanks, who was on NBC’s Tonight Show five nights … END_OF_DOCUMENT_TOKEN_TO_BE_REPLACED

Jimmy Katz leads many lives. He is the preeminent currently active jazz photographer, and has shot more than 200 magazine covers and over 600 recording … END_OF_DOCUMENT_TOKEN_TO_BE_REPLACED

Take a look at Blue Note Records’ release schedule for 2022 and it’s hard to miss the significant percentage of electronic-oriented music. In March, the … END_OF_DOCUMENT_TOKEN_TO_BE_REPLACED