Skip to content
Become a member and get exclusive access to articles, live sessions and more!
Start Your Free Trial
Home > Features > Carline Ray: “This Needs To Be Done” 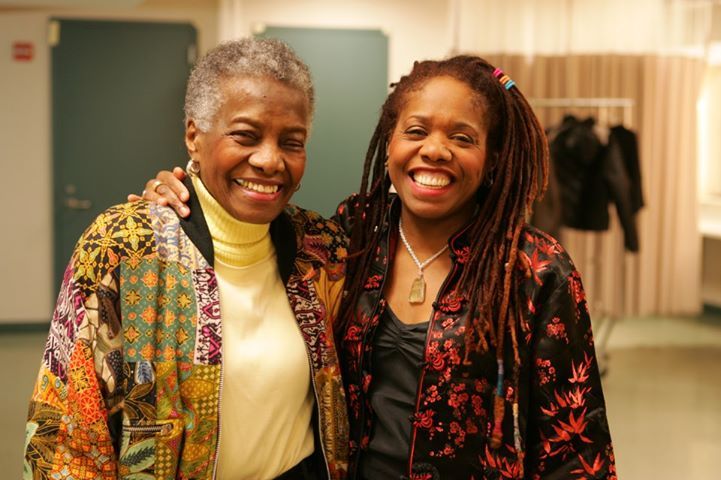 Editor’s note: Carline Ray passed away July 18, shortly after this article was published in our print edition. We’re presenting it here as it read in the magazine, without any alterations reflecting her death.

Though Carline Ray’s career spans eight decades, the pioneering bassist and vocalist, now 88, has tremendously little to show for it in terms of recordings.

For a year or so in the late 1940s, Ray was a member of the groundbreaking International Sweethearts of Rhythm, the first all-female, interracial big band. But according to Ray’s daughter, singer Catherine Russell-whose surname comes from her father, bandleader and pianist Luis Russell-none of the sides recorded during her mother’s tenure were ever released. Ray, a Juilliard and Manhattan School of Music graduate, also served two years with Erskine Hawkins’ band, appearing on a few tracks. She spent time as bassist for both Sy Oliver and Mercer Ellington and, throughout the ’50s and ’60s, sang behind various pop stars, including Patti Page, Bobby Darin and Della Reese. Ray is also an accomplished choral singer who has worked with Leonard Bernstein and as a member of various New York-based groups, principal among them the acclaimed Schola Cantorum. Her most celebrated appearance on record came in 1970, when she was given vocal solos on “Our Father” and “Lazarus,” parts of Mary Lou Williams’ magnificent Mary Lou’s Mass.

Regarding Ray’s scant catalog, Russell, 57, says, “Whenever I’d ask about that, she’d say, ‘Well, I just like to be a small part of a bigger thing.’ It was never her intention to take the lead, and she never really pursued it.” So in 2008, Russell decided it was time for her mother to at last take center stage. “Time was marching on,” she says, “and I said to myself, ‘This needs to be done!'” (Indeed, Ray is now in failing health and does not give interviews.) The result, five years in the making, is the 11-track, Russell-produced Vocal Sides, a stunning blend of jazz standards and spirituals that ranks among the finest career-capping albums ever recorded. Though Ray was still actively playing bass when the project began, Russell explains that the project “was always intended as a vocal album, because my mom hadn’t ever done that and people love her singing. I really wanted her to focus solely on being free to sing.”

To serve as music director and principal arranger, Russell called on pianist Yuka Aikawa, Ray’s close friend from their days with the Lance Hayward Singers during the ’90s. “Carline is my favorite singer,” enthuses Aikawa, who also plays on five tracks. “We are of different generations and different backgrounds, but are soul mates. She sometimes calls me her other daughter. She has tremendous energy and spirit, so whenever I play with her I feel my own spirit and energy lifted.”

Working with musicians who are favorites of Ray and Russell, including guitarist Greg Skaff, drummer Mark McLean and Aikawa’s bassist husband, Atsundo, Russell insisted that Ray choose the tunes: “She simply picked everything that she likes, including both of the Mary Lou Williams things and songs she’d performed in various shows over the years that people love to hear her sing, like ‘Come Sunday.'” From the standards repertoire Ray added Bernstein’s “Somewhere,” “When I Grow Too Old to Dream,” “Without a Song,” a sprightly “(Back Home Again In) Indiana” paired with a brilliant, scatted “Donna Lee” and, dedicated to Russell, a tender “A Child Is Born.” Russell also suggested a couple of duets, which yielded beautiful bi-generational versions of “Land Beyond the River” and “Hold On.” “Singing with her is very easy,” says Russell. “She is such an amazing musician that she knows what you’re going to do before you do it, and her jazz ears are very big.”

While Vocal Sides was in development, Russell unearthed a delightful bonus track, “Lucille,” written by Ray’s husband, Luis Russell. It was crafted for Louis Armstrong in honor of Satchmo’s wife and recorded as a demo by Ray in 1961, two years before her husband died. “We went to the Louis Armstrong Archives at Queens College,” recalls Russell, “and Ricky Riccardi, the archivist there, said, ‘We found this tape. I want you to help identify the people on here, because we don’t know who they are.’ So he put it on and I said, ‘That’s my mother!’ My dad had submitted it to Louis Armstrong to record, but he never did, and it stayed in [Armstrong’s] collection because he never got rid of anything.” Remarkably, as Aikawa observes, comparing that ’61 recording to the new album, “It shows that her voice hasn’t changed in all that time.”

Though Vocal Sides serves as a dazzling coda to Ray’s richly variegated career, she will be equally remembered for her fervent championing of women in jazz. But, stresses Russell, “What she’s always really advocated is equality in jazz. My mother believes that ‘I’m a musician first and I just happen to be female. I am equal to any male musician and shame on anyone who thinks I should only be playing piano or be the band vocalist.'”

As Aikawa adds, “Playing with her is simply playing with a great musician.”

When you’re on TV, everybody knows you, or at least thinks they know you. Take Kevin Eubanks, who was on NBC’s Tonight Show five nights … END_OF_DOCUMENT_TOKEN_TO_BE_REPLACED

Jimmy Katz leads many lives. He is the preeminent currently active jazz photographer, and has shot more than 200 magazine covers and over 600 recording … END_OF_DOCUMENT_TOKEN_TO_BE_REPLACED

Take a look at Blue Note Records’ release schedule for 2022 and it’s hard to miss the significant percentage of electronic-oriented music. In March, the … END_OF_DOCUMENT_TOKEN_TO_BE_REPLACED