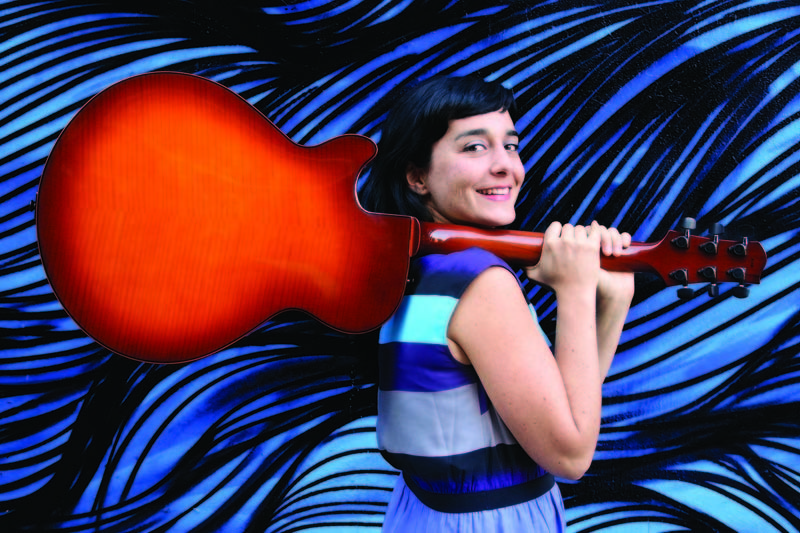 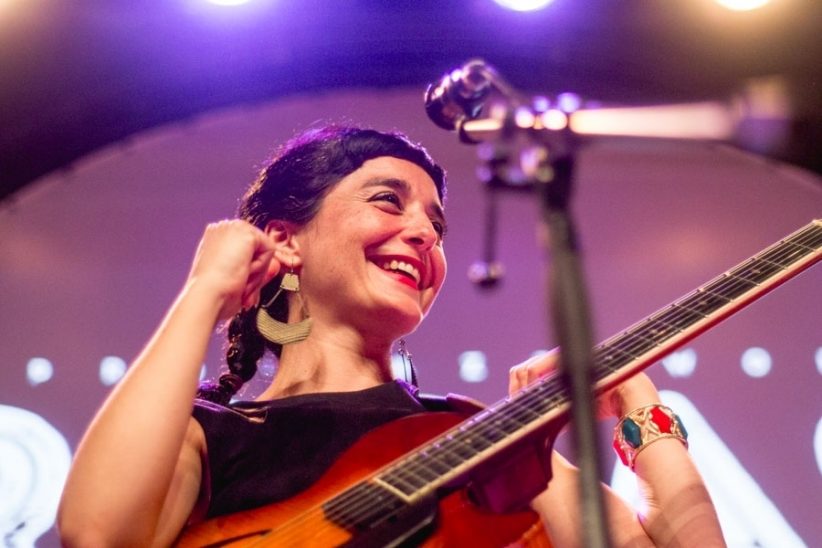 It was 1 a.m. in the basement of Rockwood Music Hall on April 23, and Camila Meza concluded her set with “Traces,” the plaintive title track from her recent Sunnyside Records release. Despite the late hour, the millennial crowd demanded an encore. “The uncertainty of

1 a.m.,” Meza said before calling “Caminhos Cruzados,” a Brazilian bossa standard she recorded on her previous album, Prisma. “Let’s see if they all know it.” Before a consensus was reached, she counted it off nonetheless; the band had big ears and deftly followed as she improvised on her Sadowsky hollowbody guitar, doubling herself on vocals in unison. The moment attested to the 30-year-old Chilean native’s intuitive approach-a technical effortlessness supported by an emotional depth that borders on the metaphysical.

“Camila lives in a state of wonder inside the music. She’s discovering new doors in rooms which are familiar and unfamiliar,” says drummer Kendrick Scott, who performed at the release show and on Traces. “A complete musician, she exudes joy in every note and silence.”

Composed over a three-year period, Traces follows Meza’s musical lodestars- Björk, Joni Mitchell, Betty Carter, Víctor Jara-as she forges her own path with six originals and four covers. She composed and arranged first, then enlisted the band: Scott, percussionist Bashiri Johnson, bassist Matt Penman, pianist Shai Maestro and cellist Jody Redhage. The luminous album is bilingual and cross-cultural, with subject matter stemming from the natural world, as though under the unconscious influence of Chilean poets Gabriela Mistral and Pablo Neruda. Writing original lyrics, which are reproduced in the album booklet, constituted the greatest challenge, but Meza let the melody dictate the words. “It’s kind of like an unconscious flow where the song itself is telling me by the syllables, and then I’m sort of putting the puzzle together,” Meza says, sitting down recently at a restaurant in Brooklyn’s Crown Heights neighborhood.

Yet Meza’s lyrical content doesn’t always reciprocally mirror form. “You can have a juxtaposition of emotions. If you have a really sad song, you would maybe start to play minor chords, but you can also have a sweet song that’s really sad,” Meza says. “When it’s two worlds together, it’s like life. There’s always more than one emotion.” Meza deploys this compositional strategy on “Away,” a mellow, samba-inflected duet with vocalist Sachal Vasandani that juxtaposes star-crossed lovers with a lushly orchestrated cello part and a lyric that resists its dreamlike nostalgia: “While a dark and heavy wind whips my soul, I keep thinking of your smile now so cold.”

On a polyrhythmic arrangement of Stephen Sondheim’s “Green Finch and Linnet Bird,” from Sweeney Todd, Meza burnishes her credentials as a cabaret-style singer with a repertoire of approximately 250 songs from the Great American Songbook. She chose not to alter fellow Chilean Víctor Jara’s protest ballad “Luchín,” rendered with solo acoustic guitar and vocals, one of the highlights of the album and of Meza’s live set. “Amazon Farewell,” Brazilian singer-songwriter Djavan’s socially conscious anthem, was inspired by a late-career Betty Carter rendition that gave Meza goose bumps. Traces concludes with Jon Brion’s wistful “Little Person,” culled from the closing credits to Charlie Kaufman’s Synecdoche, New York, with lyrics by Kaufman. “It’s one of those movies where I don’t know if I can tell you what it was about, but you understand it completely,” Meza says. “I was particularly vulnerable with that experience, and then this song absolutely made it.”

Meza may be best known for her voice, preferring a limpid vibrato-less delivery that recalls Jim Hall’s tone and Claudia Acuña’s artful phrasing, but she is something of an accidental vocalist. She discovered her vocal ability at Projazz Instituto Profesional in Santiago, through an ear-training class she took as part of her guitar studies. “In a year, I honestly went from never singing to being able to sing jazz-phrasing, varying the melody,” Meza says. “I was getting really tired of playing rock and funk and soul; every gig I had to play the same thing. I need for it to be able to be different, and then I got into this amazing, rich genre, and I’m like, ‘Whoa, I’m home.'”

In 2009 Meza moved to New York and began studying at the New School for Jazz and Contemporary Music with Peter Bernstein, Vic Juris, Sam Yahel and others. Traces is her fourth album as a leader, and she has performed in Fabian Almazan’s Rhizome and the Nectar Orchestra, a chamber group she co-leads with bassist Noam Wiesenberg.

Meza’s background as an instrumentalist earned her a spot as the vocalist in trombonist Ryan Keberle’s quintet Catharsis, which released its third album, Azul Infinito, in March. Yet Meza never plays guitar with Catharsis, which requires her to articulate dense harmonies without the aid of a chordal instrument, creating a unique melodic texture opposite Keberle and trumpeter Mike Rodriguez. When they first met several years ago at an impromptu Brooklyn jam session, Keberle didn’t realize she was also a vocalist. Later, he heard her sing. “I was speechless on every level,” Keberle says. “There’s something to me that’s a little bit different when a vocalist has the experience of playing as an instrumentalist, and I think a lot of it has to do with the role an instrumentalist plays in the band typically versus the role that vocalists play.”

In her own band, she performs both functions. For Meza, the technique of doubling her guitar lines on vocals-inspired by George Benson but also finding antecedents in Kurt Rosenwinkel, Lionel Loueke and outside the guitar lineage, with Keith Jarrett-achieves more of a grainy, oceanic timbre, as her voice falls in the same range as the guitar as opposed to in octaves. Unaware of any codified term for this effect, neither scat nor vocalese, she spontaneously coined the neologism “unisinging.”

“It amplifies the emotion from the guitar, and also makes me play more lyrically, because the guitar is an instrument that you can easily disconnect from,” she says. “There’s even more stuff to be explored if you can sing in thirds or fourths. I’m going to. Give me two years-next album.”

When you’re on TV, everybody knows you, or at least thinks they know you. Take Kevin Eubanks, who was on NBC’s Tonight Show five nights … END_OF_DOCUMENT_TOKEN_TO_BE_REPLACED

Jimmy Katz leads many lives. He is the preeminent currently active jazz photographer, and has shot more than 200 magazine covers and over 600 recording … END_OF_DOCUMENT_TOKEN_TO_BE_REPLACED

Take a look at Blue Note Records’ release schedule for 2022 and it’s hard to miss the significant percentage of electronic-oriented music. In March, the … END_OF_DOCUMENT_TOKEN_TO_BE_REPLACED