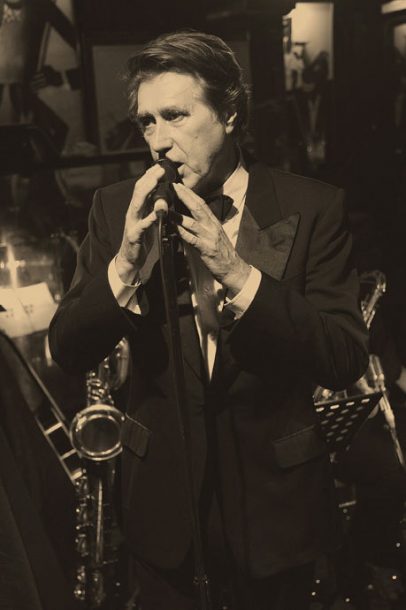 Jazz and rock fans alike might find the sleek musical élan of Bryan Ferry-Roxy Music’s principal songwriter, with a solo career to match those early glam triumphs-and the rough-and-ready strut of 1920s gutbucket music an odd pairing, but Ferry has always been a dispeller of preconceptions. His Orchestra’s recent The Jazz Age (BMG)-a baker’s dozen of classic Ferry tunes, recast as instrumentals that Louis Armstrong might have soloed over-is the latest case in point.

“For some time I had wanted to do an album of instrumental versions of my songs,” says Ferry, 67. “That was the initial aim of this record, and it just occurred to me one day that it would be interesting to do them in this period ’20s style. Like most things, it was a question of trial and error, but we soon discovered that some of my songs lent themselves to this genre of music.”

And what a fertile genre for a musical shape-shifter. Rarely, if ever, has musical art sounded at once so progressive and down-home as the jazz of F. Scott Fitzgerald’s era of flappers and bobbed hair. (It’s worth noting that some of Ferry’s jazz material might end up in the upcoming The Great Gatsby film starring Leonardo DiCaprio.) As with the blues that inspired the early Elvis, there’s a lot of mystery in those sometimes-inchoate sounds that pre-swing-era jazz groups had a knack for making full and lively-music to make you dance, and wonder, at the same time, just what the hell you were dancing to. “I definitely think there is a spirit of mystery to ’20s jazz. I love the freedom of the music and the newly discovered world of collective improvisation,” Ferry remarks. On a disc jammed with surprises-like the Roxy hit “Love Is the Drug,” done as a mash-up of the stylings of Brit trumpeter Ken Colyer, the smoky essence of Earl Hines and the jubilation of the Original Dixieland Jazz Band-it remains no surprise that the era’s titan’s, Armstrong and Duke Ellington, serve as ever-ready templates.

“The New Orleans music Armstrong produced in the 1920s had this incredible life and energy, and it stands out to me today because of its purity and earthiness,” says Ferry. “Whereas Ellington at the Cotton Club in New York was much more sophisticated and urbane, much more arranged and controlled. He used his great orchestra as an instrument to create a series of haunting and mysterious moods. These were the two spirits that I wanted to evoke on The Jazz Age.”

Said spirits are perpetually active throughout the record, one that was presaged by As Time Goes By, Ferry’s 1999 album of covers of material from the 1930s. A number of the musicians on this new set featured on that earlier date, with pianist and arranger Colin Good taking a central role in fashioning a mood of controlled chaos befitting the enigmatic aura of Prohibition-era jazz. “I had a fine group of musicians to make the re-designing of [my songs] feel like a very natural process,” explains Ferry. “Colin and I would listen to the original tracks and settle on the tempo and feel. Occasionally the song would be taken somewhere else by one of the band members playing something particularly inspiring, and we would just go with it. So you could say it was quite an Ellingtonian process.”

For Ferry, the work really started decades ago, when he began collecting records. “I’ve been a keen student of that music since about 1955. For a long time, people have tended to consider early jazz as rather uncool, and I think it’s quite a challenge to try and rectify that,” he says. A midcentury, musically curious Brit couldn’t help but absorb the jazz then being produced in his own country. There may be no more underrated sub-genre of jazz than the British strain crafted by the likes of Colyer and Chris Barber. Their controlled, somewhat Anglicized approach to what Armstrong and Ellington had started finds traction on The Jazz Age in the interaction of Ferry’s musicians. “The first concert I went to was when I was 10 years old at Newcastle City Hall in 1955, to see Chris Barber’s Jazz Band,” Ferry remembers. “‘Bad Penny Blues’ by Humphrey Lyttelton and ‘Goin’ Home’ by Ken Colyer were also records I saved up for and liked a lot, the former I believe engineered by [eccentric British producer] Joe Meek, which perhaps accounts for why it sounded so good on the radio.”

One reason why The Jazz Age sounds so good: “We felt that mono was the way to go, and we distressed the sound to create a period feel, which added to the charm of the record. We recorded the band all together in one room without a great deal of separation, so if there was an occasional disaster, we would have to start again.”

But there’s nothing of the musical equivalent of a Daisy Buchanan/Jay Gatsby disaster to be found on The Jazz Age, just a fruitful one-off that creates the same sense of wonder as the era that inspired it.

Guitarist Will Bernard bears the bittersweet blessing of virtuosic skill and eclectic taste, making his music a perpetual delight and yet hard to categorize. Maybe … END_OF_DOCUMENT_TOKEN_TO_BE_REPLACED

At 95, Chicago-based guitarist George Freeman is among the world’s oldest active jazz musicians. Although he came of musical age in the 1940s and counts … END_OF_DOCUMENT_TOKEN_TO_BE_REPLACED

When you’re on TV, everybody knows you, or at least thinks they know you. Take Kevin Eubanks, who was on NBC’s Tonight Show five nights … END_OF_DOCUMENT_TOKEN_TO_BE_REPLACED