When trumpeter/singer Brian Newman had to come up with a title for his first album on Verve, he didn’t enlist any of the usual clichés. He didn’t reference any jazz legend. He didn’t use a silly pun or clever wordplay. He didn’t pay tribute to his wife, mother, father, daughter, or son. He didn’t quote Shakespeare. He simply named the album after his car, a 1971 Oldsmobile 98 LS—appropriately called Showboat. The simple moniker neatly fits the music and the man. It is, as he calls it, “a nod to an era that went big in every sense of the word. Big bands, big cars, and big lapels. It’s an era where the show and showmanship were at the forefront.”

True enough. The sound on Showboat indeed harks back to an era of Louis Prima and Keely Smith, combining a whimsical tone with classic jazz and show music. From time to time, he’s even got his own version of Smith, a gifted and charismatic young singer named Stefani Germanotta, whom he met when he was a bartender and they were both struggling musicians in NYC. Like Smith, Germanotta changed her given name to something simpler and catchier. Unlike Smith, Germanotta didn’t have to hitch her star to a male bandleader like Prima. She’s done quite well on her own as Lady Gaga, but she still remains friends and musical associates with Newman to this day, sitting in with him at various gigs, and collaborating with him and Tony Bennett on the Cheek to Cheek album. This is, after all, not a remake of the remake of A Star Is Born. Gaga guests on Showboat’s cover of “Don’t Let Me Be Misunderstood,” a song that was a hit for both the Animals and Nina Simone, back in the day. 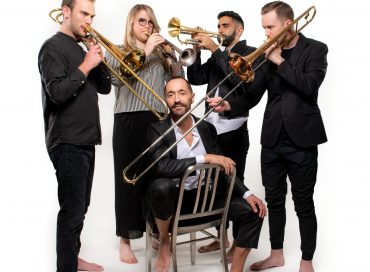 Late in the afternoon on an unusually warm January day, the House of Representatives—stirred to fast action by the attack on the United States Capitol the … END_OF_DOCUMENT_TOKEN_TO_BE_REPLACED

When Atlantic Records released the first—and, for over a half-century, only—album featuring Philadelphia pianist Hasaan Ibn Ali in 1965, the label did everything it could … END_OF_DOCUMENT_TOKEN_TO_BE_REPLACED

When Ellis Marsalis and his son Jason went into a New Orleans studio in mid-February 2020 to make a duo album for Newvelle Records, they … END_OF_DOCUMENT_TOKEN_TO_BE_REPLACED

After he lost his six-year-old daughter Ana in the 2012 Sandy Hook Elementary School shooting, saxophonist Jimmy Greene didn’t find himself turning to any music … END_OF_DOCUMENT_TOKEN_TO_BE_REPLACED