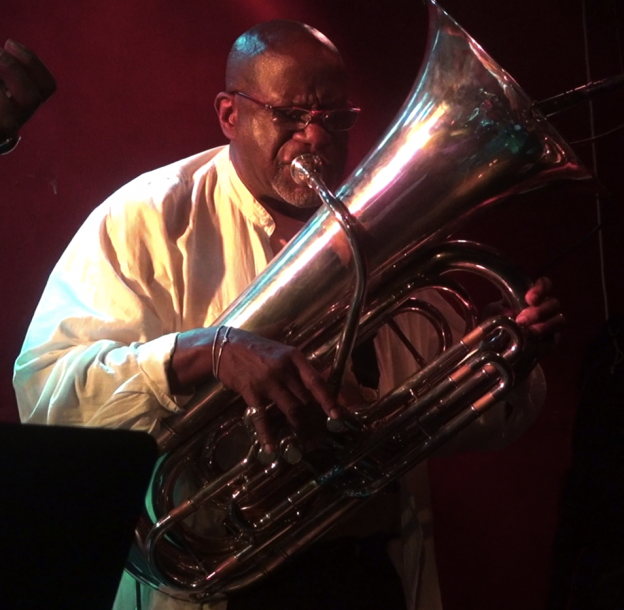 Bob Stewart had to make his own way in terms of developing a viable voice as an improviser and composer. Besides New Orleans brass bands and orchestral Third Stream music, gigs are scarce for tuba players in modern jazz. “I had to reach outside the realm of tuba players to figure out what I wanted to sound like,” says Stewart, 69. He’s recorded a handful of albums as a leader but is best known through his associations with the likes of Charles Mingus, David Murray, Gil Evans, Sam Rivers and, especially, Arthur Blythe, whose classic Lenox Avenue Breakdown LP features instrument-defining solo work by Stewart.

Originally a trumpet player, Stewart first became fascinated with jazz while living in Newport, R.I., with his grandparents. He switched to tuba reluctantly during his second year at the Philadelphia College of the Performing Arts, after suffering embouchure problems. “I hated it,” he recalls. When it came time for graduation recital, he hadn’t yet re-established his trumpet technique. “I switched to tuba and just trained new muscles,” he says. “I was able to get my degree. That was the impetus of me wanting to [continue playing tuba]. It was a blessing in disguise.” Soon after, he secured his first jazz gig in 1962 at a Philly club, though throughout his career Stewart has also worked in education, as a high school music teacher and bandleader and, today, as faculty at Juilliard and a consultant for Jazz at Lincoln Center and other organizations.

One of Stewart’s first non-tuba models was legendary jazz singer Johnny Hartman, whose range, Stewart claims, is exactly like the tuba’s. From Hartman, Stewart learned how to craft melodies as well as how to orchestrate harmonizing charts for the trombone and trumpet that allow the tuba voice to stand out. In terms of comping and blowing basslines, Stewart adapted the left-hand techniques of organist John Patton and pianist Thelonious Monk. “Monk was the tuba because his left hand was like an organ player’s in a way, but different,” Stewart explains. “Monk played in 2 like a modern stride player. Whenever his right hand was playing arpeggios, harmonies and tonalities, his left hand was basically playing, ‘Bomp-bomp, bomp-bomp.’ I identified with that.”

Stewart’s affinity for Monk plays out explicitly on his wondrous new disc, Connections-Mind the Gap (Sunnyside), which features the iconic pianist’s “Monk’s Mood” and Mingus’ “Jump Monk.” Joined by the latest edition of his longtime First Line Band as well as PUBLIQuartet, a string ensemble that features his son, Curtis Stewart, on violin, the tuba virtuoso also gives shout-outs to Blythe, Frank Foster and Jerome Harris, all figures who helped shape his musical voice. In Stewart’s small discography as a leader, Connections is the first disc that focuses almost entirely on his mentors’ works. “I’m reaching back and honoring the people who helped me get to here by hiring me to play bass in their ensembles,” he says. “These people helped me figure out how to do that on the tuba, things like how to do breath, what tonalities to use, how to keep time with a drummer for two hours at a time during the course of an evening without totally blowing my chops.”

Connections rises above a rote tribute disc with the inclusion of violinist and composer Jessie Montgomery’s five-part suite In Color. Stewart commissioned her to compose the suite based on certain multiphonics techniques that he has crafted. “The interesting challenge with In Color was to find a blend between the unique timbre of the tuba and the strings, to find a place in the middle where these two opposing timbres could meet,” Montgomery explains. “I spent a lot of time with Bob learning about his technique and the array of effects and colors that have become a part of his palette, and I used those as a basis for the techniques employed by the string quartet.”

But instead of keeping the suite intact and continuous, Stewart broke it up and sequenced similar compositions to match each of its color-based parts. For instance, “Purple,” the suite’s evocative third ballad, is followed by equally languid non-suite tracks “Monk’s Mood” and Stewart’s own “Nothing to Say.” After Montgomery’s haunting “Aqua,” Stewart follows up with Blythe’s “Bush Baby” and Henry Thomas’ “Fishin’ Blues,” two ebullient avant-blues pieces. “When I told my son about what I was going to do [with the suite], he said, ‘You’d better check with Jessie about that. She’s not going to like that,'” Stewart laughs.

Montgomery ended up loving it. “I think the piece works as a standalone, and that was the intention at first, but due to the nature of each movement being somewhat short and self-contained as far as the material, they can wander freely within the larger concept of the album,” she says. “And the way Bob lays out the entire album, it’s like a journey from beginning to end, turning the whole album into a kind of suite, which I feel honors the original concept of In Color in a special way.”

OK, that’s funny, but it also implies a problem. People who dismiss the accordion as soon as they hear it, as soon as it triggers … END_OF_DOCUMENT_TOKEN_TO_BE_REPLACED