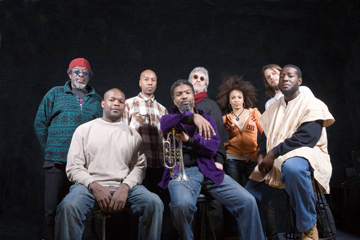 Graham Haynes was 8 years old when his mother took him to a concert by the Miles Davis Quintet in New York’s Central Park on July 7, 1969, just weeks before the recording of Bitches Brew. The band was already testing the new material as it mixed “Miles Runs the Voodoo Down,” “Spanish Key” and “Sanctuary” in with “No Blues” and “Masqualero.” Though Graham’s father, drummer Roy Haynes, had played with Davis, Graham’s mother had actually known Miles before she met Roy, and wanted her son to hear her old friend. “I’d heard a lot of music around our house,” the younger Haynes admits, “but this was pretty out there. What I remember about it more than anything was they played one piece for the whole concert. It was really several pieces, but they didn’t stop; they just kept going. When I got Bitches Brew a few years later, it struck me as a free-jazz record, like Sun Ra, with some psychedelia mixed in.”

The experience stayed with the youngster. He grew up to play trumpet and then cornet, and integrated electronics into his compositions. This past January at the Winter Jazzfest in Lower Manhattan, Haynes unveiled his latest project, Bitches Brew Revisited, a band devoted to live performances of music from that album and music in the spirit of the album. Joining the leader were guitarist James “Blood” Ulmer, bassist Lonnie Plaxico, reed player Antoine Roney, drummer Cindy Blackman, keyboardist Marco Benevento, percussionist Adam Rudolph and turntablist DJ Logic. “Logic was the wild card,” Haynes explains. “We wanted to reproduce the music from the record, but we also wanted to take it somewhere else. I’m pretty sure if Miles was making music today, he would be working with samples, cutting up and DJs.” (The band performed on June 19 in Brooklyn as part of this year’s CareFusion Jazz Festival New York.)

Though it is 40 years old, Bitches Brew still exerts a powerful pull on musicians both inside and outside the jazz world. In addition to Haynes’ octet, two other groups have specialized in recreating the music of Davis’ 1968-75 electric period: Mark Isham’s Silent Way Project and Wadada Leo Smith & Henry Kaiser’s Yo Miles! In both of those bands, the guitarist was often Nels Cline, who not only leads his own trio, the Nels Cline Singers, but also plays lead guitar for the rock band Wilco. “My twin brother, Alex, bought Bitches Brew sometime in the early ’70s,” Cline says, “and it seemed quite subtle to my ears: a miracle of chemistry, an almost amorphous exposition of layered harmonic information, supple melodic invention and burbling grooves. It still does. … I have heard Bitches Brew derided as a ‘sell-out’ record. The idea that a double-record of extended, polyphonous sprawl could be a sell out has always amused me, but then I am no purist.”

“You’d be hard-pressed to identify a recording that defines an era as well as Bitches Brew does,” trumpeter Christian Scott adds. “My grandfather had crates of thousands of LPs, and one day when I was 11 or 12 I got to the Miles Davis crate. I remember putting it on and immediately feeling like there was something going on that I didn’t understand. But I also knew I didn’t want to be in the position of not understanding it for long.”

Scott not only figured it out but also took Bitches Brew as a model for how one could make jazz out of the tonalities and grooves of the day’s contemporary music. As the leader of his own band, Donald Harrison Jr.’s nephew integrates indie-rock textures and hip-hop flavors into compositions marked by his own Miles-ian trumpet blowing. “I was always impressed by the way Miles could pick and choose which notes to play to leave his thumbprint on the music,” Scott says. “I think the trumpeters who play the fewest notes have the most distinctive voices. Maybe that’s why those other guys play so many notes-because they haven’t found their voice yet.”

When you’re on TV, everybody knows you, or at least thinks they know you. Take Kevin Eubanks, who was on NBC’s Tonight Show five nights … END_OF_DOCUMENT_TOKEN_TO_BE_REPLACED

Jimmy Katz leads many lives. He is the preeminent currently active jazz photographer, and has shot more than 200 magazine covers and over 600 recording … END_OF_DOCUMENT_TOKEN_TO_BE_REPLACED

Take a look at Blue Note Records’ release schedule for 2022 and it’s hard to miss the significant percentage of electronic-oriented music. In March, the … END_OF_DOCUMENT_TOKEN_TO_BE_REPLACED