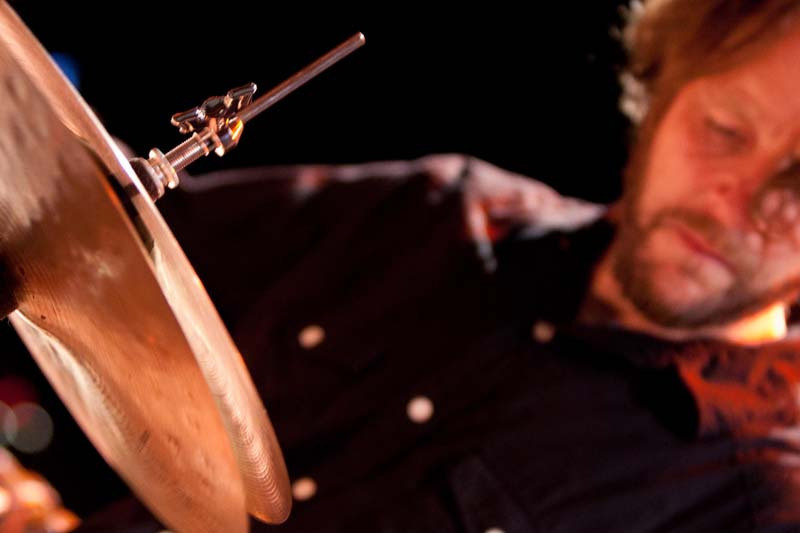 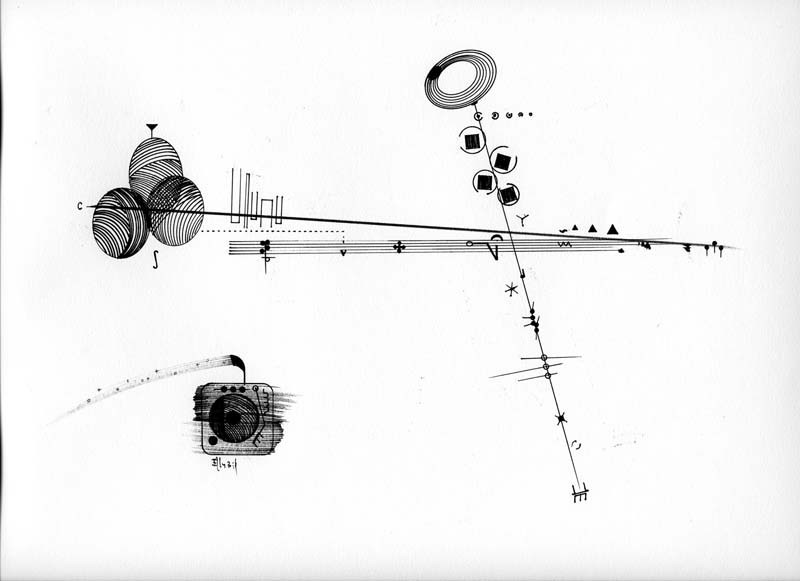 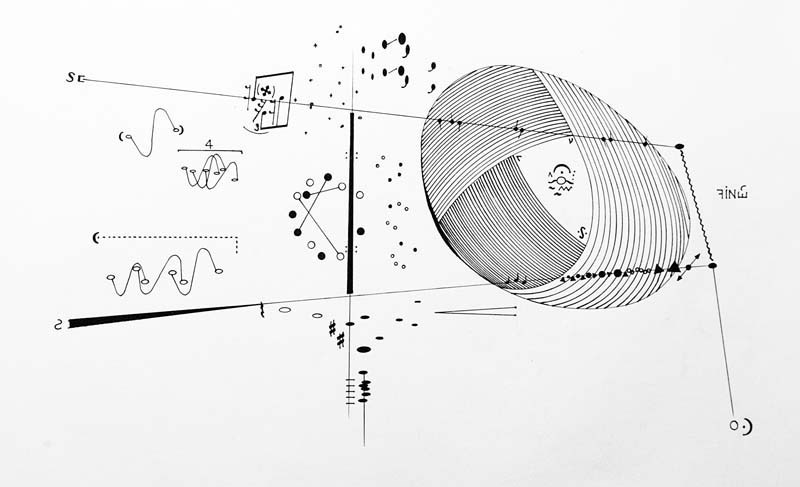 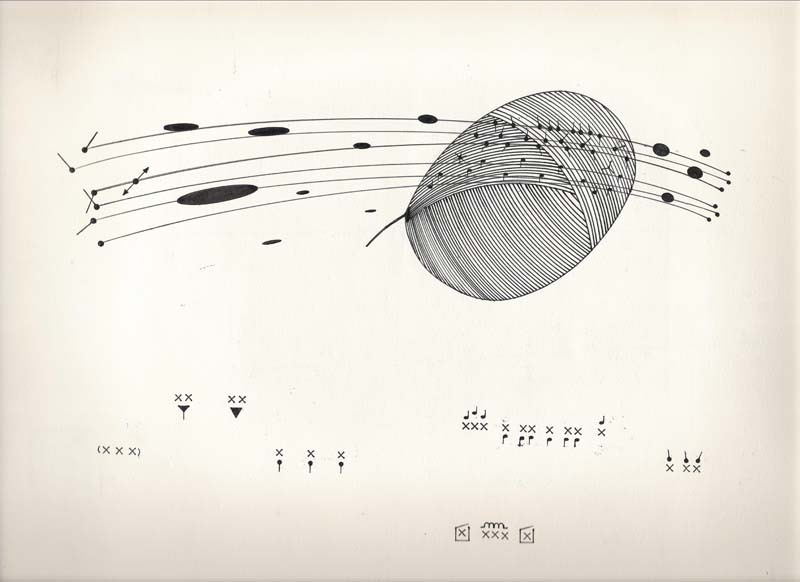 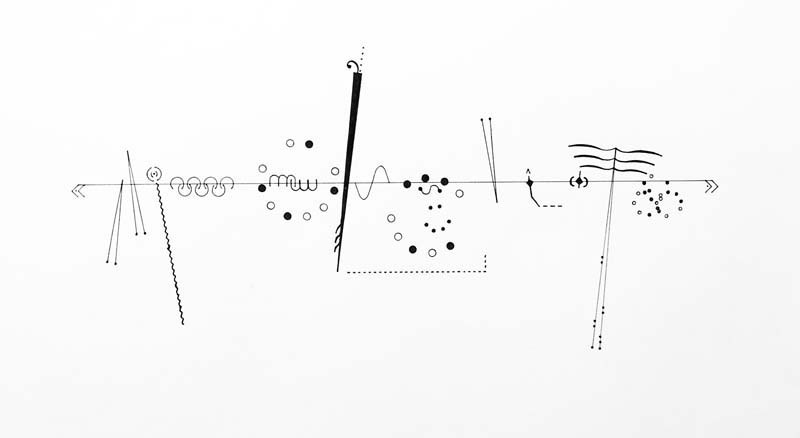 As a drummer, Medeski Martin & Wood’s Billy Martin has a lot to offer: funk, Latin, swing. But the 52-year-old New York native has just as much to give as a visual artist. His drawings are full of eyes, creatures, cones and celestial scenes; his pieces are abstract and spontaneous, hinting at comprehensible forms but rarely recreating them. But now you can hear Martin’s visual art. On a recent engrossing album, Wandering (Amulet), the drummer presents graphic scores-images meant to be played as if they were traditional music charts. And during a three-day run at the Drawing Center in Manhattan in July, Martin coordinated live performances of these pieces, by a cast including saxophonist John Zorn and keyboardist John Medeski. For this area of Billy Martin’s creative world, an old saying gets a tweak: A picture is worth a thousand notes.

Though Martin has drawn all his life-he is responsible for Medeski Martin & Wood’s marvelously strange logo, for instance-and pianist Anthony Coleman performed one of the visual charts in 2013, Wandering, which has a companion book, and the Drawing Center shows are the public premiere of Martin’s graphic score endeavor. Inspired by the ancient vodou symbols known as veves, the drummer’s graphic scores came into view only recently, and the project progressed with Martin’s performing itinerary. “I got deeper into it traveling with Medeski Martin & Wood on the road,” he says, seated at a Vietnamese restaurant near his home in New Jersey. “I would be on a tour bus, and it’s awfully boring to be touring through the United States in general, so I would just slip into a library and take over a table and draw on pads.”

Though he doesn’t look to any single work or artist as the inspiration for his graphic scores, Martin does acknowledge his project’s historical precedents. “I think, ultimately, it’s the chance operation,” Martin says. “With Cage, Duchamp and others from Dada and surrealism, there’s an idea that you can give somebody some kind of coded message and they can interpret it however they want-and then, ultimately, that’s the message. … It’s about them.”

Martin’s instructions to his graphic-score players are few. There is any number of ways to perform the pieces, and he doesn’t want to lay out any particular paths. “I really don’t tell them much other than just, ‘Play whatever you see and how you interpret it,'” Martin says. “If you have any questions I’ll guide you, but otherwise there are no real rules here. … I want them to respond to it; I want them to be attracted to it. And basically I tell them this is going to inform you to play something. You could look at it as an overall piece and then close your eyes and perform something, or follow it in any direction: up; down; left to right.”

New York composer and electronic musician Annie Gosfield performed at one of the Drawing Center gigs and contributed a graphic-score interpretation to Wandering. “Veve 33” finds Gosfield working with a jarring assortment of tools, from scary chords to mechanical sounds. Martin’s drawing includes what looks like a radio and three balls of yarn. “He sent me a number of images and just let me decide,” Gosfield explains. “I got maybe a little more involved than I expected to, because there’s such beautiful detail in the drawing and my instrument is sampler, so I have to access the sounds and kind of pre-select. So I wanted to be able to reflect the variety of the imagery within the one image. But Billy left it completely open to me.”

The seven other graphic score tracks on Wandering are presented by one player each. The record opens with a fun but ominous solo-piano trip from Anthony Coleman entitled “Criterion,” in which the keyboardist’s staccato notes seem to mirror Martin’s unconnected dots. Guitarist Bill Frisell brings an eerie, minimal cut called “Veve for MMW,” which perfectly captures Martin’s outer-space-like visual. And although Zorn and the electronics player Ikue Mori gave a powerful duet performance at the Drawing Center program I saw, Martin prefers to hear his graphic scores played by one musician at a time. He wants an unobstructed view of a single voice entwined with his art. “All these people I consider composers in general, so I felt like I wanted to get their essence, their language,” he says. “I wanted to hear just the singular language coming out for each piece.”

When you’re on TV, everybody knows you, or at least thinks they know you. Take Kevin Eubanks, who was on NBC’s Tonight Show five nights … END_OF_DOCUMENT_TOKEN_TO_BE_REPLACED

Jimmy Katz leads many lives. He is the preeminent currently active jazz photographer, and has shot more than 200 magazine covers and over 600 recording … END_OF_DOCUMENT_TOKEN_TO_BE_REPLACED

Take a look at Blue Note Records’ release schedule for 2022 and it’s hard to miss the significant percentage of electronic-oriented music. In March, the … END_OF_DOCUMENT_TOKEN_TO_BE_REPLACED