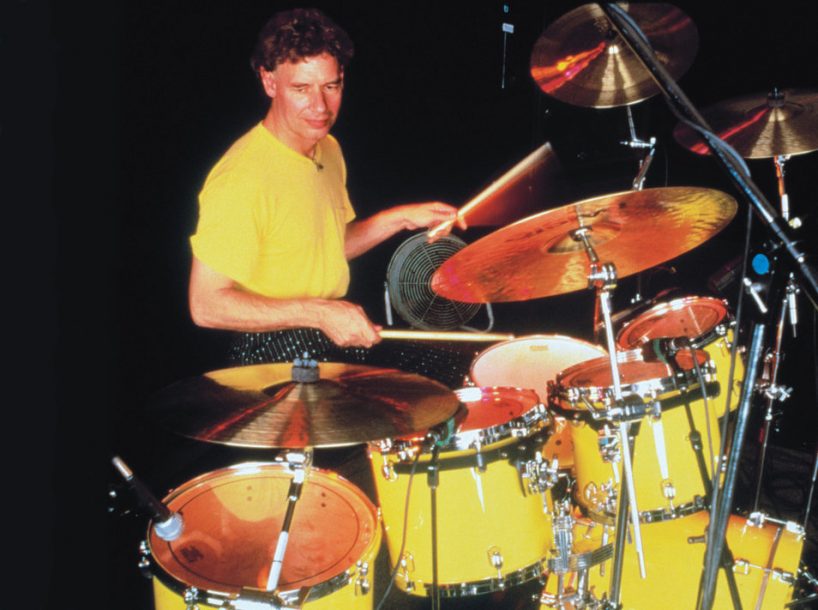 Who would have thunk that, in these multifarious, culturally precarious late ’90s, two early icons of British rock drumming would be taking their rightful place in the jazz world? Ginger Baker, former Cream drummer, has now cut two trio albums with Bill Frisell and Charlie Haden. And now Bill Bruford, alumnus of Yes and still-extant drum presence in King Crimson, has just released If Summer Had Its Ghosts on the Discipline label, a largely acoustic trio session with guitarist Ralph Towner and bassist Eddie Gomez.

On the other hand, why shouldn’t these creative musicians, who happen to be British rock drummers of note, indulge their jazz muses? Chalk it up, perhaps, to late-blossoming ambitions.

Of course, the jazz pedigree on the new Bruford project should come as no great surprise to those who have followed his trajectory in and out of rock. Like Baker, he played jazz early on. Bruford proved to be a trusty ace in the sub-genre oft dubbed as art-rock or progressive rock, for which the drummer is armed. His generous technical facility and a rhythmic sophistication allowed him easy access to these bands’ tricky meters and cerebral notions.

But there was always something more brewing behind the beats. Bruford showed an unusual degree of creative will and gumption, not to mention obvious jazz affinities, beginning with his band Bruford in the late-’70s. In a sense, though, Bruford’s jazz jones could be sensed, in subtle ways, on his first album as a leader, Feels Good To Me, with cameos by vocalist Annette Peacock. Bruford was one of the finest ensembles in the oft-maligned pantheon of fusion, with guitarist Allan Holdsworth, bassist Jeff Berlin and keyboardist Dave Stewart. Those qualities carried over, as well, into his fine post-fusion, electro-acoustic band Earthworks, featuring monstrous young Brits, keyboardist Django Bates and saxophonist Ian Ballamy.

For some, though, Bruford’s new album will be the first introduction to the drummer as a bonafide jazz artist, partly by association with his seasoned jazz bandmates.

“In a funny kind of way, I think I am coming full circle here,” Bruford says. “I started with jazz and had a long, prolific time fronting something called art-rock. But jazz has never been very far from my brain. If there has been any element in these groups I’ve been in that has been jazz-and I think there has been jazz there-then it’s probably been me who was responsible for it.

“Jazz has always been my first love. I don’t think you ever forget it. My earliest listening experiences that thrilled me as a young character were with jazz, and somehow, it’s like a siren call that beckons me back.”

How was it that this particular aggregate of musicians came together?

“Well, people always make crazed suggestions over dinner, like ‘ah, Bill, I think you should be playing with Led Zeppelin…’ People say this stuff and you never listen. But a friend of mine, Russell Sommers, made this suggestion. I thought ‘nah,’ but the idea wouldn’t quite go away, so I picked up the phone and got going. Ralph and Eddie turned out to be spectacular partners and terrific friends.”

One of the most impressive aspects of Bruford’s discography has been his unique and melodic flair for composition, evident on the new album’s adventurous yet lyrical writing. Bruford claims that his compositional voice comes partly from a position of enlightened naivete. “A little knowledge is a dangerous thing. Drummers with an incomplete sense of harmony or harmonic knowledge, but a lot of enthusiasm, can sometimes be dangerous things. I have every sympathy for Eddie and Ralph, who sometimes put up with my askew sense of harmony.

“But that’s the beauty of it. They were out of their usual patch, which I think is great. Heaven knows, I was out of my usual patch, too. One of the many wonderful things about jazz is how fast people at getting to the heart of the music. Three guys who have never met before are trying to find some common sense of time between you, pretty fast.”

Most of the material was written by Bruford, with an ear for these players’ gifts. He says, “I started thinking along those lines-trio, acoustic, light, mobile, airy, 12-string-y.”

Once the parameters were set, did the writing process flow easily? “No, it was torture,” he laughs. “I’m not going to be one of those guys who says ‘hey, writing is a breeze.’ I sweat over this stuff. What you finally hear on the record is the version that’s kept out of hundreds of alternatives. That’s partly because drummers are forever searching for that mysterious territory which will let a saxophone player or guitar player wail for hours, but which is also interesting.”

Oddly enough, the most straightforward tune on the album is its closer, “Now Is the Next Time,” but it was written by Towner, not the leader. Bruford explains, “I think Ralph liked the idea that ‘hey, this isn’t going to be ECM. Let’s have a party.’ I really enjoyed that aspect of it. Funnily enough, I was moving more into the jazz direction. We met in the middle somewhere.”

In a sense, Bruford has been meeting his own various and sundry musical interests since his earliest days. Jazz was there in the formative stages. “My first four or five years on the drums-from the age of 14 through 18-was playing swingtime and big-band-y stuff, and doing cover versions of Blakey and Monk and a lot of soul jazz-like Bobby Timmons-from the Riverside label that we had in England. That was our kind of pop music, really. I grew up doing that, and then came to rock and a little later. I came from a triple pulse rhythm rather than a duple pulse, as it were. Nowadays, the rock guys come straight from a duple pulse and never really played a triple pulse in any sense.”

Has his jazz instinct gotten him into trouble in rock contexts?

“That’s an interesting question, and the answer is ‘yes,’ many times. I’m always looking for a different way to play it, whatever it is, on a nightly basis. Rock is a repetitive sport. Most rock guys do the same thing. I wasn’t into that kind of script at all, really, which has made me seem, to other rock guys, to be too changeable, too much of an irritant to the music.”

King Crimson leader Robert Fripp, Bruford says, has an answer for that, “and it’s a smart answer-you get two drummers. One can connect you to the metronome and then Bill can do what he wants. That works quite sweetly.”

Back when the band called Bruford was formed in the ’70s, after Bruford’s first two-year stint with King Crimson, “the term jazz-rock or fusion wasn’t really around then. I just thought we were an intelligent rock group. It was a heady time. We played fast and furious, like kids do. I think now it’s not music that I’m going to put on to listen to, personally, but it was an exciting time.” The band reached its expressive peak on the now-classic album, One of a Kind, a fusion milestone.

By the ’80s, Bruford found himself back in the reformed King Crimson and out of the bandleader role for a spell. When he returned, it was fronting Earthworks, which he says “came from two or three very strong feelings. Number one, I wanted to show that electronic percussion could be pivotal in jazz, with the sense of playing chords with electronic percussion, which had, by the mid-’80s, become possible. It also stemmed from the idea of using some of the best of the young British jazz musicians-like Django Bates and Ian Ballamy-who, to cut a long story short, began to feel much more self-confident. While they, of course, admired their American colleagues, they no longer felt so grossly inferior to them.”

These days, Bruford is aiming at a new level of subtlety, and a richer link to jazz in his own music. “Ambiguity is something I really like in other musicians-the sense of ‘was it this or was it that?’ You listen to it on Monday and you think it’s this and on Tuesday, you think it’s that. I like that, both harmonically and rhythmically. In my music so far, I’ve always been encouraged to be like you are in rock music-to be very clearly-stated, to speak with a clear voice, to be unambiguous, usually to be loud, and slow. Jazz, on the whole, is faster, more subtle, lighter, much more ambiguous. That’s the pleasure of it.”

Which is not to say that Bruford sniffs at the challenges of playing in King Crimson, which continues to be a source of inspiration-and gainful employment. “There is something very attractive about trying to make a fairly complicated idea speak very simply in a rock group, and trying to orchestrate around the band so that it sounds good, and will sound good at the back of 3,000 seats. In a way, I pride myself on that. I’m reasonably skilled at that and I know how to be clear on a drum kit.

“I like that, but I know I can do that. The thing I want to do is be much messier, I think. I like a soup. I’m not sure I want to hear my own clarity quite so much. It’s not a sloppiness that I’m after. But it’s that fabulous in-between thing, with people playing over bar-lines and the rest of it, which Elvin, of course, had down years ago. The stuff that you can’t write is so intriguing. It’s all that stuff that I want to get to more in my own playing. I think I’m getting there slowly.”

Overall, Bruford’s musical saga has been a notably diverse one, even by the loose terms of his eclectic generation. As he sees it, “there have been various fashions and fads that come and go-odd meters and electronics, and somehow you try to absorb it all. I don’t think ‘oh, I’m a rock guy or a jazz guy.’ You just try to develop your own character on the set, which has a little bit of everything you’ve ever heard or done in it, and then some.

“That’s surely why you become a musician, because it’s so fascinating. Here’s the secret-it only gets more fascinating the further you go. I was a pretty keen kid at 18, but I’m an even keener kid now, at 48. It gets more exciting. What the hell is everyone going to be doing in 15 years time? I want to be part of that.”

(Please note the equipment changes all the time according to the project. On If Summer Had Its Ghosts, the 22″ Bass drum came down to an 18″, 16″ tom became 14″, 13″ to 12″, 12″ to 10″. Heads are Evans Geneva G1 Sticks are ProMark Bill Bruford Signature Model SD9 Cases are XL Specialty Percussion)

Guitarist Will Bernard bears the bittersweet blessing of virtuosic skill and eclectic taste, making his music a perpetual delight and yet hard to categorize. Maybe … END_OF_DOCUMENT_TOKEN_TO_BE_REPLACED

At 95, Chicago-based guitarist George Freeman is among the world’s oldest active jazz musicians. Although he came of musical age in the 1940s and counts … END_OF_DOCUMENT_TOKEN_TO_BE_REPLACED

When you’re on TV, everybody knows you, or at least thinks they know you. Take Kevin Eubanks, who was on NBC’s Tonight Show five nights … END_OF_DOCUMENT_TOKEN_TO_BE_REPLACED