Skip to content
Become a member and get exclusive access to articles, live sessions and more!
Start Your Free Trial
Home > Features > Before & After: A Listening Session With Allan Harris 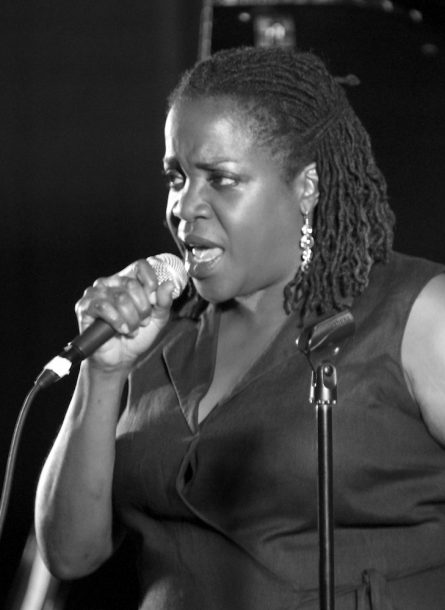 Carla Cook in performance at The Attucks Theater, Norfolk, Va on October 4, 2013 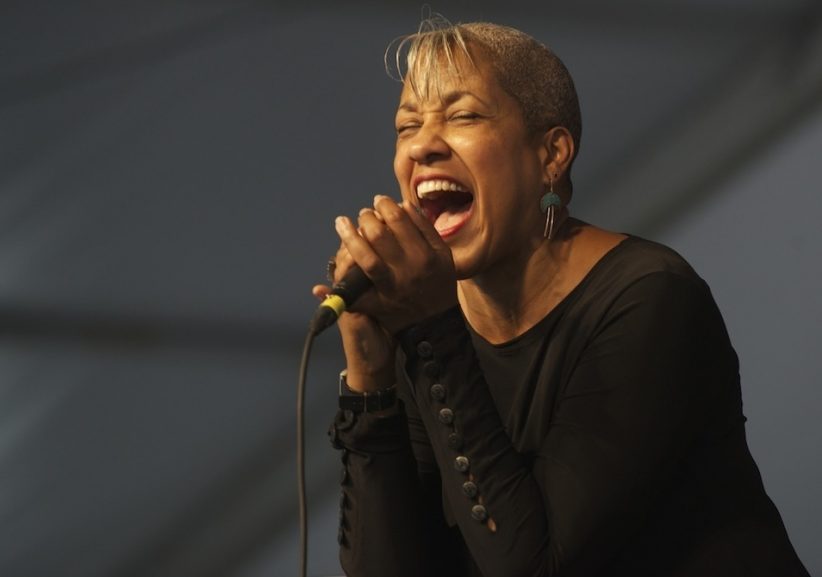 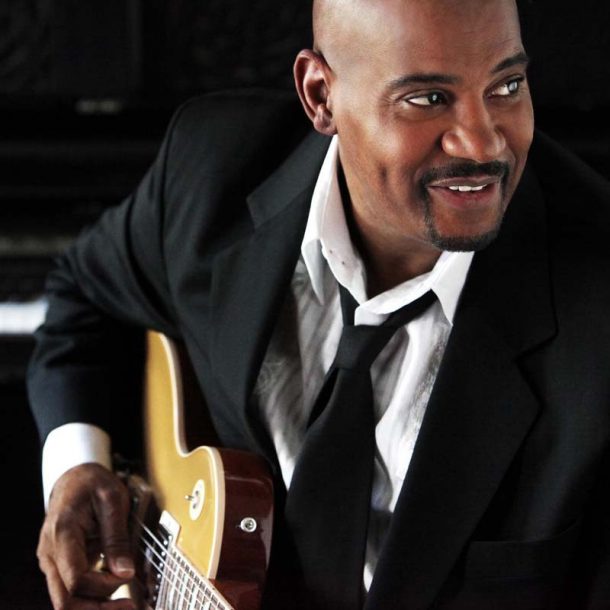 On his most recent album, Black Bar Jukebox (Love Productions), veteran vocalist and guitarist Allan Harris pays tribute to his upbringing in Harlem, where he used to eat at his aunt Kate Ingram’s luncheonette, Kate’s Home Cooking, a neighborhood fixture that was featured on the cover of organist Jimmy Smith’s Home Cookin’. The restaurant had a much-loved jukebox, and in an era before earbuds and Starbucks tastemaking, patrons programmed their background music for the cost of a Coke. This eclectic milieu informs Harris’ record, which covers Eddie Jefferson (“I Got the Blues”), Elton John (“Take Me to the Pilot”), Frank Sinatra (“You Make Me Feel So Young”) and John Mayer (“Daughters”). Harris, 59, has taken the album on tour through Europe and the U.S., and will return to the studio this summer for a follow-up with its producer, Brian Bacchus, who has taken part in fruitful collaborations with Gregory Porter and Norah Jones.

In New York in May, Harris played Reverend Gary Davis in Search: Paul Clayton, a new musical centering on the eponymous folksinger and his relationships within the 1960s Greenwich Village folk revival, especially Bob Dylan. Harris has appeared in several other productions, including Cross That River, a stage musical set in the 1860s that he developed from his 2006 album of the same name. The song cycle, which Harris currently plans to revive and restage, relates a fictional narrative about a runaway slave who becomes one of the first black cowboys.

This fall, Harris and pianist Eric Reed will bring their Billy Strayhorn tribute, 100 Years of Strayhorn, to San Francisco, followed by a weeklong stint at Dizzy’s Club Coca-Cola. “I just love what I do,” Harris says. “I make people smile. That’s my gig. I pinch myself sometimes.”

Harris recently sat down for his first Before & After with JazzTimes at his home in New York City’s Hamilton Heights neighborhood, where he lives with his wife and manager, Pat Harris, and their dog, Ruby.

“Strange Fruit” (from Yesterday I Had the Blues: The Music of Billie Holiday, Blue Note). James, vocals. Recorded in 2014.

AFTER: That’s right! His Billie Holiday tribute. I listened to that. As a matter of fact, I’m doing a performance with him at the Vienna Jazz Festival. My mind was caught on Billie’s version of it. I think, first of all, coming from a hip-hop/R&B background and being able to switch over the way he did is pretty daunting. I like the people who took him on that journey, and I see him in different settings, like with Wynton Marsalis. I think he’s really expanded the role of male jazz vocalists. For male vocalists, I feel that he’s brought the new crowd not with him, but he’s invited them to come along. He’s gone back into the catalog that we all grew up on, and he’s putting that inner-city blues hipness to it, which is really refreshing.

BEFORE: [singing vocalese with “Moanin'” horn hits] Gregory … Porter … I love him. If Bill Withers had a son with Oscar Brown Jr., it would be this cat. He’s a journeyman and he’s a storyteller, and besides all that, he’s a nice guy. There’s really nothing you can say about Gregory that’s not positive. He’s worked hard. He’s good at what he does. He paid his dues here in New York at St. Nick’s Pub and Smoke, and it’s been a gradual climb. What can I say? If you look at male vocalists today, what better example than Gregory Porter? Especially for young cats looking at him to know that all you have to do is find your own voice and sing. He opened the door again for them.

BEFORE: Since Sarah Vaughan, there hasn’t been a female vocalist that is as unafraid to be adventurous [as Dianne Reeves is]. She has the same language as Sarah Vaughan. She doesn’t copy her at all. I demand that any vocalist, male or female, if they get into this craft of vocalese or vocals, go and see [Reeves]: her interaction with the band; her choice of material, from the way she gets arrangements from Robert Glasper on down; and she’s just a wonderful tactician. I love her. What can I say? She is a pure-form jazz entertainer who is from that school of Sarah and Nancy Wilson, and she takes it to that height where she draws the audience in and weaves in and out of things.

BEFORE: René Marie is one of my favorite singers and one of my best friends. We’ve done a few projects together. She is just pure joy, and she happens to have a great voice and personality. And when you see her perform, that’s all she’s about. She’s into one thing, and that’s making you smile with her. Fortunately, she has cats with her who support that groove, like Quentin Baxter on drums. And she came late to the game, too, which is really wild. [Ed. note: Marie didn’t begin her career as a professional jazz singer until she was in her 40s.] She just said, “I’m going to sing.” But that’s what joy is about. It doesn’t matter what age or where you come from. If you want to do something, you just do it. I know, because I’ve known her over the years. I know there are very few artists that are always joyful about what they do, never bitter, and adventurous too. And you can hear it in all of her music.

BEFORE: This is killing me. This is terrible. I’m at a loss here and I know who it is.

AFTER: God. Of course. Carla and I did a show with René Marie at Dizzy’s [Club Coca-Cola]. I love her. She and René Marie invited me to do a project called Two Skirts and a Shirt. Singing with those two was really wonderful. Carla is … I can’t describe her voice. She’s from the school not of Dinah Washington but of that era, where she just sings the melody and puts a little bit of that blues tinge on it. How dare I not know Carla Cook. She hasn’t had anything out in a while. I know she’s in Philadelphia teaching now, and I think I didn’t recognize her because she’s been under the radar. Shame on me.

BEFORE: The band is swinging. I don’t know.

AFTER: Oh, God! Barbara and I were on the same label [Mons Records] and we did a tour of Germany and she blew me away. I’ve seen her perform solo and with Ernie Andrews. Carla Cook comes out of that same type of school, where you put that chitlin’-circuit vibe on things and have your jazz chops tight, which Barbara does. Listen to her. There are three women in that vein: Marlena Shaw, Barbara Morrison and Mary Stallings. They all know each other. All three come from the same school of thought, where they’ve done club gigs, done big band, jumped back into clubs to survive, and they all have that wonderful, lilting R&B thing that they bring to jazz, which I see José James moving into.

When you’re on TV, everybody knows you, or at least thinks they know you. Take Kevin Eubanks, who was on NBC’s Tonight Show five nights … END_OF_DOCUMENT_TOKEN_TO_BE_REPLACED

Jimmy Katz leads many lives. He is the preeminent currently active jazz photographer, and has shot more than 200 magazine covers and over 600 recording … END_OF_DOCUMENT_TOKEN_TO_BE_REPLACED

Take a look at Blue Note Records’ release schedule for 2022 and it’s hard to miss the significant percentage of electronic-oriented music. In March, the … END_OF_DOCUMENT_TOKEN_TO_BE_REPLACED