Skip to content
Become a member and get exclusive access to articles, live sessions and more!
Start Your Free Trial
Home > Features > Battle Trance: Pushing Back Against an Unfocused, Insincere World 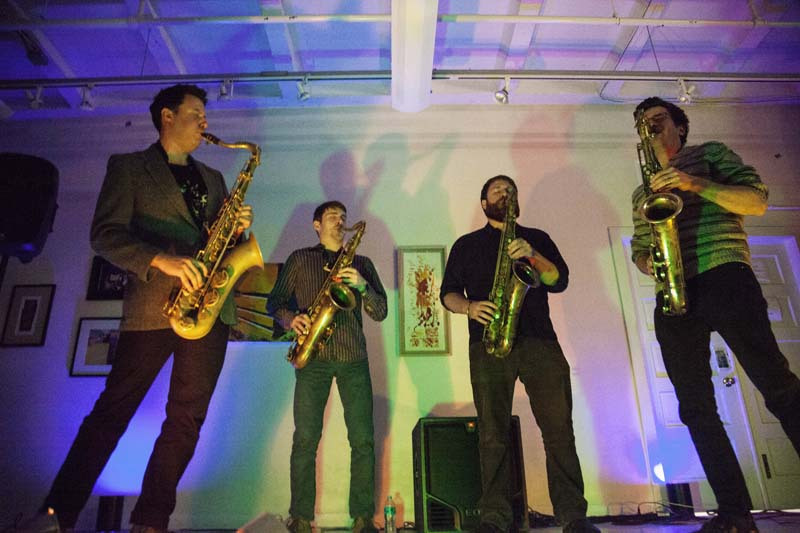 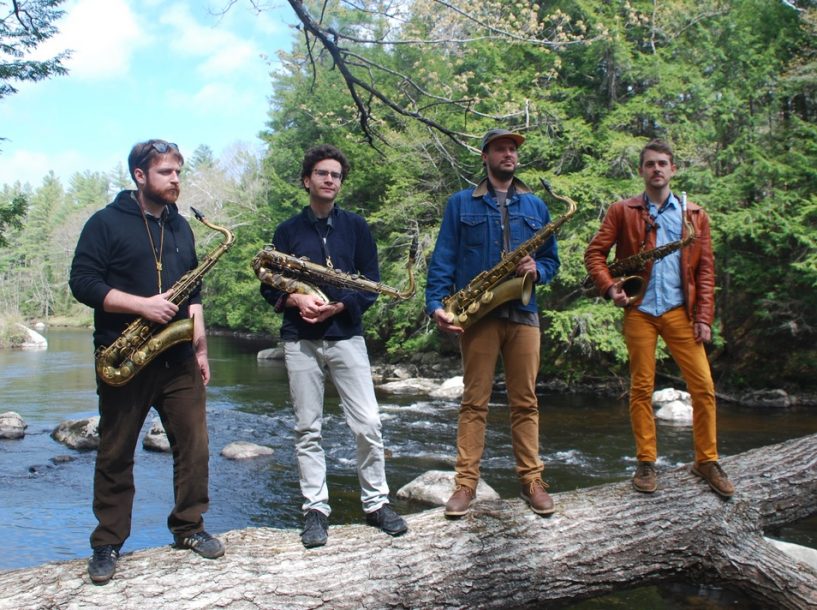 It was inevitable that jazz-trained musicians would address the angst of life in a digital age. A few years ago, one of the more experimental things a player could do was to turn his acoustic instrument inside out, making it sound like electronics or machinery. That’s what was happening in the circular-breathing suites of saxophonist Colin Stetson or the doomy, gridlocked music of piano trio Dawn of Midi.

These artists didn’t just make staggering music; they created a new repertoire of sounds, tools that hinted at the shared space between sweat and metal. Someone was bound to take those techniques and expand them into something more abstract. Maybe music that’s a little less representational could become a lot more revealing.

Enter Battle Trance, a group of four tenor saxophonists whose debut, Palace of Wind (New Amsterdam), was one of last year’s most important though overlooked recordings. The album comprises a 42-minute suite in three movements, episodic and accruing, each one a collection of smaller parts that fade in and make contact with what’s next and then recede.

The quartet uses circular breathing and tone-smearing technique to render big sounds that can sometimes evoke exertion or machines, but never stop there. They also remind you of birds flocking; seas drifting into dew and then into your memory; an overspill of information giving way to a rock-solid sleep.

Travis Laplante leads the group, and if you recognize him it’s probably from the experimental noise-jazz cult ensemble Little Women, which is now on indefinite hiatus. Battle Trance has plenty in common with the scraping, centrifugal sound of that band, but even at its most piercing, this group’s music is less about rancor.

During a January performance at Manhattan’s Judson Church, part of the Winter Jazzfest marathon, every moment felt simultaneously like a transition and an immersion. “Being able to hold opposites-they say that’s the definition of alchemy, which is what I’m extremely interested in dealing with on the musical level,” says Laplante, 32. At the concert, things moved from rippling, swirling depth to time-freezing gospel chords to searing bleats. The quartet pumped its minimalism with warm blood, and slowly passed the baton of harmonic movement. As one saxophonist initiated a transition, the others maintained a surround sound.

The band’s origin story begins eight years ago, when Laplante was working his annual summer job as an instructor at the Yellow Barn Music School and Festival in rural Vermont. He developed crippling vertigo, waking up each morning dizzy and sick. Having exhausted Western remedies, he turned reluctantly to acupuncture. It was his first experience with Chinese medicine, and the relief was immediate.

He took up Qigong, an ancient practice of breathing and strength building, and in the years since he has grown devoted to it. It’s helped him improve his saxophone technique, particularly his virtuoso circular breathing, and has brought him added emotional balance.

In 2013, with Little Women dormant, he thought up Battle Trance. All at once, he decided on the three other Brooklyn tenor players he wanted for the group: Jeremy Viner, Matthew Nelson and Patrick Breiner. They’d never performed together before, but each cosigned.

Then Laplante started to compose Palace of Wind, mostly on the saxophone, sometimes just in his brain. “The impetus came from meditation. I would have something basically come, and then take what I was imagining, and bring it into the ensemble,” he says. He demonstrated the parts he had composed, and the band learned them by playing along. For five months leading up to the recording date, the four of them practiced multiple times each week. “We focused on cultivating something that’s greater than the sum of our individual voices,” Laplante says. “Especially as four tenor players, and in general as Westerners, we’re all brought up thinking that we have to be very special and that we have to be better than the other tenor players, or that you have to have your ‘own voice.’ That is much more talked about than the ability to actually lose yourself in something greater.”

Musicologist Joseph Jordania coined the term “battle trance” recently, arguing that panic or extreme need can lead humans into a state of almost superhuman focus and devotion. He suggests that art can bring us there, too. Certainly the saxophones in Battle Trance are interested in that idea: They try to rattle your consciousness, to rework the way you’ve been wired, without being overt or repetitive.

When artists do something like that, they’re making protest music. So what is this band protesting against, or for? In some subtle way, it’s reacting to a world where we express ourselves through “likes” on social media, or touched-up selfies, or links to argumentative articles.

In digital communication, everything passes through computer code first before reappearing on your device as sound, or light, or ideas. But Battle Trance is a world unto itself, built of nothing but resonance. Listen for more than a few minutes and you’ll lose track of melody, narrative, even time. It’ll connect you to a deeper part of you. In a world where representation threatens to outstrip action, that’s a useful step to take: both backward and ahead.

When you’re on TV, everybody knows you, or at least thinks they know you. Take Kevin Eubanks, who was on NBC’s Tonight Show five nights … END_OF_DOCUMENT_TOKEN_TO_BE_REPLACED

Jimmy Katz leads many lives. He is the preeminent currently active jazz photographer, and has shot more than 200 magazine covers and over 600 recording … END_OF_DOCUMENT_TOKEN_TO_BE_REPLACED

Take a look at Blue Note Records’ release schedule for 2022 and it’s hard to miss the significant percentage of electronic-oriented music. In March, the … END_OF_DOCUMENT_TOKEN_TO_BE_REPLACED

Those who are only familiar with bassist Martin Wind’s jazz credentials—both as a leader and as a first-call sideman for Bill Mays, Dena DeRose, Ken … END_OF_DOCUMENT_TOKEN_TO_BE_REPLACED