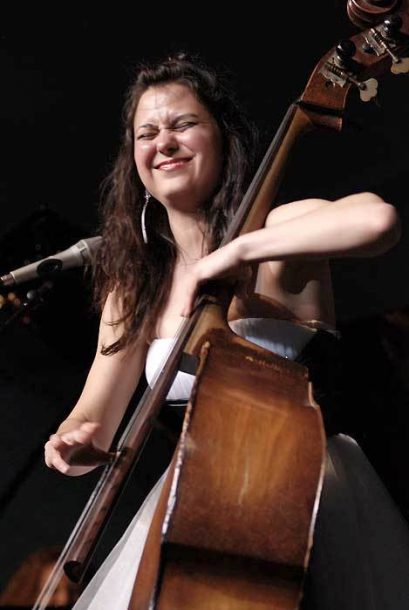 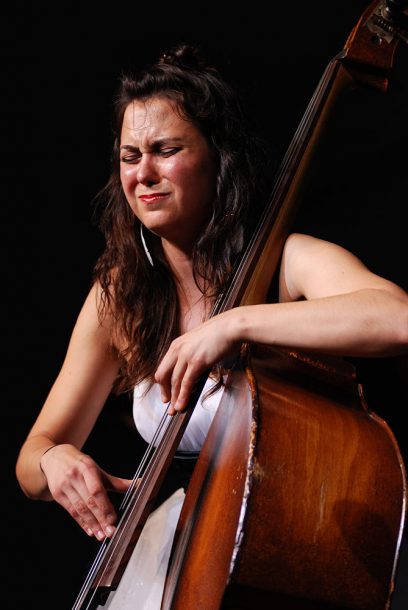 Bassist, singer and composer Brandi Disterheft has much to be grateful for-Les McCann, Duke Ellington, Charles Mingus-and she makes no secret of those debts to jazz totems on Gratitude (Justin Time), her third album as a leader, released last fall. But the New York-based Vancouver native is most thankful for her late cousin, David Jahns, an ardent supporter of her music who lost his battle with cancer in 2011 at age 30. Gratitude is dedicated to him

“He lived in Edmonton, so he’d drive four hours there and four hours back just to see one of my gigs,” Disterheft says. “He was high spirited, buoyant and super supportive. I wrote ‘Gratitude’ to be grateful for his life. Every time I play the song live, I can feel his spirit and his aura around us.”

Disterheft actively sought out jazz tradition when she first arrived in New York in 2009, commuting back and forth from Toronto via a 14-hour overnight bus and attending jam sessions at Fat Cat, Smalls and Zinc Bar. She approached bassist Rufus Reid, who instantly recognized her conviction and talent and took her on as a student. “Immediately I saw that she wasn’t coming out of the cookie cutter,” says Reid. “She definitely had her own individual voice, even as young as she was. She was coming out of something almost bodacious, in a way, like Charlie Mingus, which is not what you’d expect. She was determined and very confident in what she was attempting to do. Some people search for a long time, not that she’s found it completely.”

Beyond her association with Reid, Larry Grenadier, Niels-Henning Ørsted Pedersen and Ron Carter inform her well-defined sound and penchant for formalism, having also studied with Carter at great length. “As a person, he’s majestic, dignified and graceful, and that’s exactly what his bass playing is like,” she says. “And he demands perfection.”

Disterheft, who is in her early to mid-30s but chose not to disclose her specific age, grew up with a jazz pedigree. Her aunt is a session singer in Los Angeles and her mother is a Hammond B3 player hailing from Chicago. After she’d started on piano, her father convinced her to switch to bass at 13-partially as a joke, due to the instrument’s disproportionate size. Following high school she attended Humber College in Toronto, studying under multi-instrumentalist Don Thompson, among others, and what began as a punch line became a career.

On Gratitude, Disterheft charts her influences and imprints her personal stamp on the past with a humility that belies her top-flight skill. Comparisons to Esperanza Spalding are natural, but the two are more different than they are alike. Where Spalding tilts toward neo-soul and genre-fusing experimentation, Disterheft is thoroughly enamored of swing- and blues-indebted straight-ahead jazz. She enlists kindred spirits in saxophonist Vincent Herring, drummer Gregory Hutchinson, trumpeter Sean Jones, flutist Anne Drummond and, on piano, fellow Canadian Renee Rosnes, all of whom have the ability to delve deep into tradition without sounding histrionic. “The word I would use is ‘solid.’ She’s someone who can take care of business, and that’s not an easy thing to come by,” says Herring, who has also used Disterheft in his own groups. “I liked her on a personal level. She’s easygoing and very flexible. Surprisingly, at a young age, she knows a lot of music and interprets things very well.”

Her masterful interpretation of the standard “But Beautiful” opens with a velvety rubato section on bass complemented by a laidback but deeply emotive vocal, channeling the same gripping pathos and diffuse harmonizing of the through-composed title track. (As a singer she takes a cue from Blossom Dearie, with a plangent soprano range.) This penchant for nostalgia develops on “Le Regarder La Rencontrer Encore,” a rhapsodic original vocal in French. She swings hard throughout Gratitude, especially on “Portrait of Duke,” and achieves a simmering intensity on McCann’s political protest anthem “Compared to What,” a driving, barebones rendition that remains relevant in the current zeitgeist. Another politically minded highlight: the original “Blues for Nelson Mandela,” a showcase for Disterheft’s arco prowess.

By staying pretty firmly within jazz’s defined parameters, Disterheft has found just how limitless the idiom can be. “Wayne Shorter says there’s no mandate in jazz. It’s just playing with the unknown,” Disterheft says. “I already feel like in my short career-because I’m not 80 years old yet-I’ve gone through so many phases, from only wanting to hear John Coltrane to only wanting to be hip and not play in any tradition, and then going back to Bird and only wanting to play true bebop. So it’s constantly changing.”

When you’re on TV, everybody knows you, or at least thinks they know you. Take Kevin Eubanks, who was on NBC’s Tonight Show five nights … END_OF_DOCUMENT_TOKEN_TO_BE_REPLACED

Jimmy Katz leads many lives. He is the preeminent currently active jazz photographer, and has shot more than 200 magazine covers and over 600 recording … END_OF_DOCUMENT_TOKEN_TO_BE_REPLACED

Take a look at Blue Note Records’ release schedule for 2022 and it’s hard to miss the significant percentage of electronic-oriented music. In March, the … END_OF_DOCUMENT_TOKEN_TO_BE_REPLACED