Skip to content
Become a member and get exclusive access to articles, live sessions and more!
Start Your Free Trial
Home > Features > The Ballad of Roxy Coss 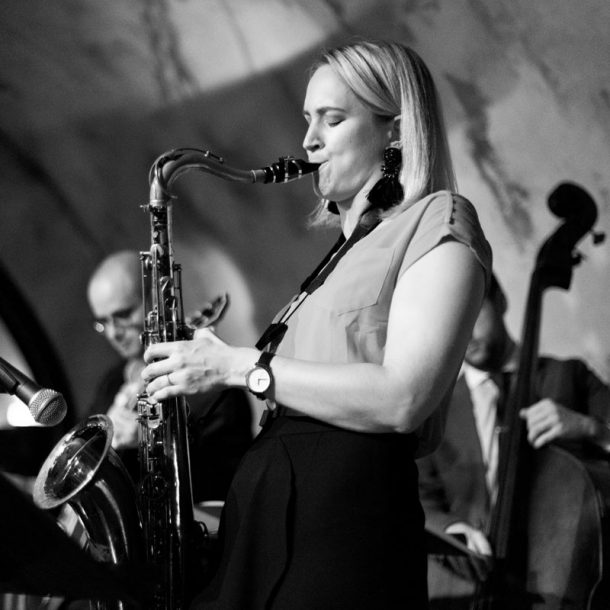 After playing the second tune at her CD-release party in early April, at Smalls in the West Village, Roxy Coss put her tenor saxophone down. “I’m looking for a microphone,” Coss told the house, packed with 20- and 30-somethings, including a high percentage of young women. “My voice is very soft.”

She found the mic and introduced her collaborators, praising the contributions of pianist Miki Yamanaka, a brand-new bandmate, and the personnel from her new record, Chasing the Unicorn (Posi-Tone): guitarist Alex Wintz, bassist Rick Rosato and drummer Jimmy Macbride, whose rumpled informality contrasted the leader’s crisp black ensemble. Coss stated the titles of the anthemic, metrically modulated “Unwavering Optimism” and the bright, Brazil-tinged “You’re There.” She projected pungently on both selections, with a centered tone and impeccable articulation, executing thematically cohesive statements with clarity and presence.

Coss played “Oh! Darling,” from the Beatles’ Abbey Road, which, she said, she memorized by ear—parts, keys and lyrics—during her formative years in Seattle. Just 30, she proceeded through a suave, urbane, seductive reading that deeply evoked a veteran of the boudoir tenor tradition. She switched to soprano sax for “Breaking Point,” a reflective straight-eighth piece from her 2016 release, Restless Idealism, featuring Wintz, trumpeter Jeremy Pelt, pianist Chris Pattishall, bassist Dezron Douglas and drummer Willie Jones III. She remained on soprano for “Chasing the Unicorn,” uncorking a Coltranean opening, then “blowing snakes” on an intense solo. Returning to tenor for “Happiness Is a Choice,” Coss again revealed her balladic gifts with an aria-like statement. She ended the set with a burner, Joe Henderson’s turbulent “A Shade of Jade,” on which she slalomed decisively through the gnarly harmonic path.

The following day, over lunch at a Senegalese restaurant near her Harlem apartment, Coss traced her affinity for ballads and swinging to age 12, when she soaked up a Stanley Turrentine ballads record. “My teacher said, ‘Oh, you like this big, old-school tenor sound,’” she recalled. She then progressed through, among others, Dexter Gordon (“very influential—I feel I can’t escape it”), Hank Mobley, Jimmy Forrest (“we did a lot of Basie in high school”), Stan Getz, Joshua Redman and Eric Alexander. Midway through high school, she became “intrigued with Wayne Shorter’s mysteriousness and John Coltrane’s prowess.” “Nobody ever said to me specifically—or maybe they did, and I didn’t hear it—that I should try to sound exactly like them in tone and inflection,” Coss said. “For me it was more about getting the notes and time feel, but it was in my ear. I definitely had a very strong idea and aesthetic. I was 12, my peers would be shredding these licks, and it bored me—like, ‘Why would I want to play something that’s a pattern?’ I tried to understand the whole theory of jazz. My teacher told me that it was hard—and rare—for someone so young to have such a strong vision of what I wanted to sound like, but that eventually it would pay off.”

Payoff eventually began with a full scholarship to William Paterson University, gigs with Clark Terry and Claudio Roditi and, later, the second-tenor chair in the DIVA Jazz Orchestra. A three-year Thursday-night stand at the Upper West Side club Smoke led to a two-year run and two recordings with Pelt, whom she impressed with her abiding professionalism and knowledge of the canon. The weekend before our conversation, Coss had played three nights with DIVA at Dizzy’s Club Coca-Cola, followed by the NEA Jazz Masters concert at the Kennedy Center. “In 2009, I met Sharel Cassity on a gig with Claudio,” she said. “She liked that I could read and solo, and recommended me to sub on a European tour. It’s incredible to play with women musicians. Men come to New York and find mentors who teach them how to be and what to do. Women don’t have that opportunity—as soon as you try to do that with a man, it becomes weird.

“You face little stuff all the way through. For example, I always played the ballads in high school. Yeah, I was good at it, maybe because I had a great tone and the boys didn’t. But it’s unfortunate that it fits the gender roles. I think that getting put in that box early on prevented me from working on other things, like, ‘Can you play a fast solo?’”

On her blog, Coss presents several well-written, pull-no-punches essays that address the complexities female jazz musicians face. “For a long time I was scared to say anything,” she said. “But at a certain point I felt that honesty has always been very important to me—and who am I trying to please here? I named Chasing the Unicorn not only for reflecting the symbolism of female power, but also as breaking the mythical boundaries of reality. I think the ultimate challenge for an artist is to find their best self rather than try to be something—say, sounding like Coltrane or Wayne Shorter. Then, as I grow and get better at music and life and career, those edges come into focus, and I define my vision of ‘Who is Roxy going to be?’ Then it’s being able to execute that at the fullest capacity.”

Jimmy Katz leads many lives. He is the preeminent currently active jazz photographer, and has shot more than 200 magazine covers and over 600 recording … END_OF_DOCUMENT_TOKEN_TO_BE_REPLACED

Take a look at Blue Note Records’ release schedule for 2022 and it’s hard to miss the significant percentage of electronic-oriented music. In March, the … END_OF_DOCUMENT_TOKEN_TO_BE_REPLACED

Those who are only familiar with bassist Martin Wind’s jazz credentials—both as a leader and as a first-call sideman for Bill Mays, Dena DeRose, Ken … END_OF_DOCUMENT_TOKEN_TO_BE_REPLACED

Have saxophone, will travel. With apologies to Paladin, that sums up the career of reed player Greg Abate. Since the early 1990s, he’s been a … END_OF_DOCUMENT_TOKEN_TO_BE_REPLACED