Skip to content
Become a member and get exclusive access to articles, live sessions and more!
Start Your Free Trial
Home > Features > At Home With Jeff “Tain” Watts 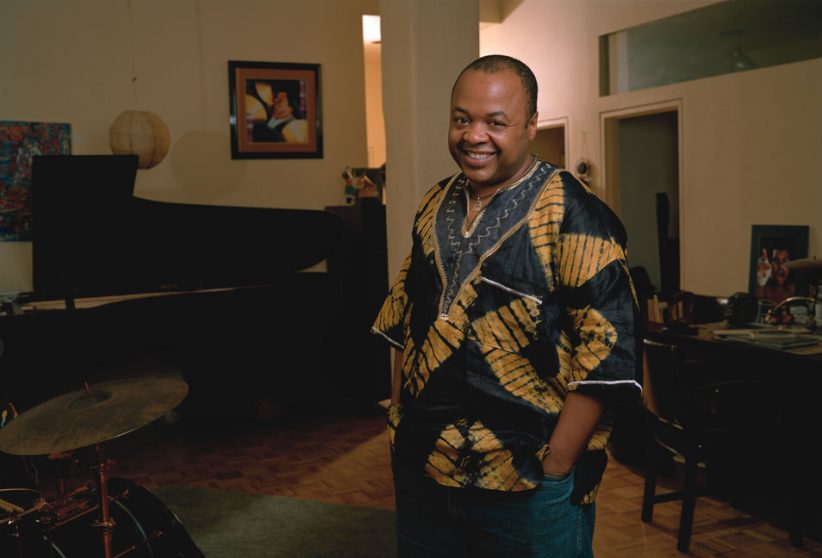 “I moved here in 1998,” said drummer Jeff “Tain” Watts. “I was working a lot, still in Wynton Marsalis’ band, and my manager at the time told me, ‘It’s time for you to invest in some property.’ I saw an ad on a Sunday for a 1,300-square-foot loft in downtown Brooklyn, called and saw it on Monday. It’s the only place I looked at.”

On a busy stretch of Atlantic Avenue, between the picturesque brownstones of Boerum Hill and the grittier commercial streets of downtown Brooklyn, Watts’ apartment is close to Manhattan and an easy stroll from a jumble of antique stores, restaurants, clothing and furniture shops.

Inside it is large and light, decorated in an eclectic and unpretentious style. Drummer figurines abound, as do mementos from Watts’ career: gold records with Wynton and Harry Connick Jr. by the front door, a Grammy on a bookcase, a shot of Watts with Jay Leno in the kitchen and in the bedroom a poster from Mo’ Better Blues.

Throughout are photos of musicians: heroes like Monk and Bird, friends like Kenny Kirkland, and those others—Billy Higgins, McCoy Tyner and Max Roach among them—who have been both. His favorite image is a fiendish-looking shot of Elvin Jones in action during the Coltrane years. “The Great One,” he said, smiling.

When Watts isn’t on the road with Branford Marsalis or his own group, Tain and the Ebonix, he’s here with his girlfriend, trumpeter/arranger Laura Kahle. With two busy musicians in residence the household is obviously set up for two things: comfort and making music. On the kitchen side of the main space is a sink-in leather sofa and chairs facing the stereo and television. The rest of the room is filled with instruments: traps in the center of the room; upright and electric basses standing ready; a pocket trumpet, keyboard and laptop on a desk; and, against the bedroom wall, Watts’ prized Baldwin piano. “It’s a concert grand piano, nine-foot, made in 1918,” said Watts. He picked out a few chords to demonstrate its sound. “Even though I don’t play well, I use it to write.”

The piano, which Watts got just over a year ago, could be a symbol for this phase of his creative life. Having long ago established his drum credentials, he’s become increasingly interested in composing. “When I first got into writing it was kind of a hobby. But now I’m starting to enjoy it almost as much as playing. I really am just writing all the time. It’s a cool environment because if I get an idea, I can try it. So I just kind of sit and think about music.”

In September, Watts released Folk’s Songs, the first CD on his label, Dark Key Music. “A lot of my tunes end up being about people that have been really cool to me, giving me some positive energy.”

Seven of the 10 tracks are originals, played by a quartet that includes Marcus Strickland, Christian McBride and David Kikoski. Among the guest musicians is Juan Tainish, the enigmatic vocalist and MySpace presence who is never seen in the same room with Watts. “He’s a dude I met in Japan,” said the drummer cryptically.

When he’s not making music, Watts says he can be found on the couch. “It’s all simple,” he says of his downtime. There are sports—”football, tennis, basketball”—but Watts is also a film buff, with, according to Kahle, an encyclopedic memory for film trivia and completely undiscriminating tastes. “He’ll go see anything,” she teased. “He went to see The Adventures of Shark Boy and Lava Girl—with the 3D glasses.”

And then there’s food, or the occasional absence of it.

“I kind of have this thing with beans. I just think beans are the greatest food,” said Watts. “If I was on a desert island, if I could just have a pot of greens and a pot of beans, some cornbread or a biscuit, I’d be fine.”

But as he spoke, Watts was on day seven of a 10-day fast he does once a year to keep his weight down, subsisting on a mixture of water, maple syrup, lemon and cayenne pepper. As he talked about his beloved beans, he seemed to roll the words around in his mouth as if sucking the flavor out of them. “I have an appreciation for most beans. You know, the black bean has a vibe. There’s nothing like a nicely cooked red bean. A butter bean is your friend. A navy bean is a thing to behold,” he laughed. “Black-eyed peas—it’s cool. Kidney bean—very fine. I already told [Kahle], I’m going to start soaking my beans and getting everything ready to start cooking on Monday.

“We have some friends that really, really like to cook. We have parties once in a while and they’ll come over and bring food or cook. People will come and play music and hang out. I recorded my CD on the 21st or 22nd of December. I finished a session and we had a party that night. It started at 8:30 at night and there were still people here at 5 p.m. the next day, playing,” recalled Watts with obvious delight. “That’s why they want to kick me out of here!”

Neighborhood
“I really like Brooklyn ’cause it still feels like a neighborhood. Manhattan—I still enjoy going there, going to the clubs, going to see music, but it feels more touristy than Brooklyn. The other feature of this neighborhood is the Nets are moving right down the street. We can walk three blocks and go see LeBron or somebody like that. How bad could that be?”

Local Characters
“Tarus Mateen is right around the corner. David Gilmore is not far, Ravi Coltrane, Richard Bona. JD Allen is right down the street. I can walk to all those places.”

Hobbies
“Besides sleeping? I think film is my hobby. Football and film. I dig Scorsese, Kubrick, [the] Coen Brothers, Terry Gilliam. I also have a great big taste for stupidity: Anchorman, Bad Santa. Bad Santa‘s one of the stupid classics. Norbit, for some reason. Little Man.”

The Small Screen
“We were really into Big Love. We got way into it this year.”

At 95, Chicago-based guitarist George Freeman is among the world’s oldest active jazz musicians. Although he came of musical age in the 1940s and counts … END_OF_DOCUMENT_TOKEN_TO_BE_REPLACED

When you’re on TV, everybody knows you, or at least thinks they know you. Take Kevin Eubanks, who was on NBC’s Tonight Show five nights … END_OF_DOCUMENT_TOKEN_TO_BE_REPLACED

Jimmy Katz leads many lives. He is the preeminent currently active jazz photographer, and has shot more than 200 magazine covers and over 600 recording … END_OF_DOCUMENT_TOKEN_TO_BE_REPLACED