Skip to content
Become a member and get exclusive access to articles, live sessions and more!
Start Your Free Trial
Home > Features > Andy Summers: Calling Out the Jazz Police 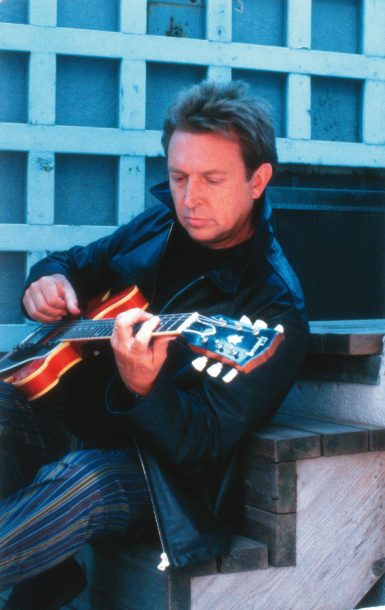 They may be just across the 101 freeway from each other, within spitting distance, but there’s a world of difference between the Universal Amphitheater and the beloved hole-in-the-wall called the Baked Potato. One is a sprawling hall, the other a tiny North Hollywood jazz club which has survived for 30 years. This is the spot where many L.A.-based musicians, including Tom Scott, Larry Carlton, Lee Ritenour and on and on, have decamped by night to do research and development, while pursuing other “straight” jobs in the studios by day.

Guitarist Andy Summers, former rock star and now an Angeleno headlong into a solo career as an instrumentalist, has seen both sides, and taken the stage of both venues. As the inventive guitarist for that mega-pop band, the Police, Summers made hay on the arena circuit until the band came to an end in the mid-’80s. Of late, you’re likely to find Summers’ name on the Baked Potato marquee on a Wednesday night. And he couldn’t be happier about it.

“I went down there and tried it one night,” he says, “thinking that it would be a one-off, but in fact, I had an absolute blast doing it and the people who run the place are so nice. It turned into a thing. Now, when I’m in L.A., I’ll do it a couple of times of month. It keeps me in playing shape. It’s like a cooking pot, very creative in terms of trying things out in improvising and working on new tunes. It fuels the whole endeavor.”

In the decade of his post-Police solo career, Summers has now made eight albums, but they have always fallen in the nebulous area of instrumental work, somewhere in the gray area between rock, folk and experimental music. It’s a different story with his debut album for RCA, The Last Dance of Mr. X. This will be considered by many to be his first idiomatic entry in the “jazz” world, at least by virtue of the material. For the first time, Summers takes on such jazz repertoire as “Footprints,” “Afro Blue,” Horace Silver’s “Lonely Woman,” Monk’s “We See” and the moody Mingus classic “Goodbye Pork Pie Hat” to cap it off.

But Summers claims to have made no calculated effort in wooing the jazz muse on this project. As he comments, “I hadn’t realized this, but by playing some of these well-known pieces, people think ‘oh, it’s a jazz record.’ Well, I thought the other ones were, too. Because I played pieces that people know, and associate them with jazz, it actually helps it. I never thought of that. But there’s a little tip there. It has actually helped the cause a bit.”

Does Summers also feel a bit of a stigma from jazz quarters, having been in a position of rock stardom before entering the jazz domain?

“There’s a little bit of that,” he responds, “but that’s human nature. I can roll with that. I’ve played on so many jazz festivals and with so many people. Having been in a band like the Police, it was certainly a rock band that you’re forever associated with it. It’s sort of like Sean Connery never being associated with anything beyond 007. You say ‘ok, that’s fine.’ That’s just a mindset that you have to deal with a bit.”

Part of the inspiration for the more pronounced jazz direction of the new album came from a desire to get on record some of the non-original material Summers had been playing with his trio live. He also got ideas from playing last year in a trio with Larry Coryell and Trilok Gurtu, who had done versions of “Goodbye Pork Pie Hat” and, from a more obscure corner of the jazz canon, the Wayne Shorter tune “The Three Marias,” which first appeared on Shorter’s Atlantis album.

In Summers’ version, the open harmonies and signature rhythmic motif are enhanced by the guitar trio textures, with a bit of help. “For that one,” he explains, “we rehearsed it a bit and really got the backing tracks with the bass and drums. This was less spontaneous than the other tracks, and I had to overdub a little bit. You can’t pull off the song without using Wayne’s harmonies, so I built that one up a bit. That piece seems particularly well-suited to the guitar.”

Guitar-friendliness, or at least adaptability, was a factor in many of the repertoire choices for the album. “Goodbye Pork Pie Hat” has been done by a number of guitarists, including renowned versions by John McLaughlin and Jeff Beck.

“I think it’s one of the great 20th century melodies, actually,” Summers asserts. “Somehow, it’s just got an atmosphere to the tune. It’s urban and bittersweet. It seems to be the real blues, but it’s not actually a blues. Somehow, the harmonic quality is a bit strange, but it’s very satisfying and timeless.

“Again, it sits nicely on the guitar. It’s written in F, but on the guitar, of course, it’s beautiful in E minor, so you’ve got those open strings. Again, it’s slightly daunting to play because it’s one of these monumental pieces. It’s a bit like repainting the Mona Lisa. You wonder ‘what can I bring to this?’ I was pretty familiar with most of the versions, some of which I like and some which I don’t. I don’t really like the Jeff Beck version. He plays the melody nicely but after that, it doesn’t go anywhere.

“I got out the original record and listened to it. I thought ‘well, basically, it doesn’t get any better than that.’ I wanted to play it fairly straight and get it across.”

“So at 15 through 17, that was totally what I was into. That’s never left me. Right through everything, it has always been a sort of bedrock, even right through the Police. Of course, I had a lot more information at that point. I had played classical guitar, rock, blues-I was a contemporary player. But in the first years, I was just trying to play jazz, copying American jazz guitar players.”

It was never his sole objective to become a kind of rock and roll legend. “My tastes have always been very eclectic. Classical music was important. By the time I was 20, I was listening to Olivier Messiaen and Takemitsu. Ultimately, I went to college for four years and played classical guitar. I really just got into 20th century music.

“You start, as a kid of 12 or so, and you basically try to build up an overall sensibility about music, not just a bunch of licks. I think that’s the most important thing. You have to develop a whole musical mind, a vocabulary.

“I think my playing was formed A: by what I’m drawn to, and B: what I don’t like. I proceed by negation: I don’t like this, so it leaves me with that. I find that that’s often the case. When I got into the Police, I had been through six years of intensive classical guitar playing, and had played some blues stuff. At that point, I had a very 20th century sensibility.

“What was fortunate was that Sting was also into jazz and classical music. He came out of a fusion band and he was also into classical guitar. That was an interest that we shared. He started to write these things and I said ‘wait a minute, I can play this off-the-wall stuff, and this guy can sing over it with no problem.’ He had ears for it. It became available that I could create this sort of synthesis from these different places. In that trio, it was available. It was part of the magic.

“I didn’t have to just slam down I, VI, II, V in barre chords with a bit of distortion. We were able to get in some seconds and added ninths. I didn’t just play tertiary harmony, but get into some of the other 20th century stuff, and there were no complaints from the singer.”

When the Police officially closed up shop in the mid-’80s, Summers headed west to Los Angeles and took stock of his creative motives. “Basically, I’d been in an ultimate rock band. Where do you go from there? It was simple. I just really wanted to play the guitar, write my own music, and stand out front as a guitar player. I had many offers to play with some big rock singers. It always seemed like second division after what I’d done. I didn’t see a lot of point to it.

“I decided it was more authentic for me to be the guitar player that I really was and commit to that. From one perspective, it was a harder route to go. But really, a harder route even is to do something that you don’t feel enthusiastic about. I just chose what I wanted to do.”

In a sense, Summers has been fleshing out the ideas which he presented in more concise, pop-oriented fragments in the Police. “I like to say to people: if you like what I was doing with the Police, you should listen to these records, because this is the ultimate extension of that. This is the way my path was leading. Sometimes, I’ll hear people say ‘oh, your records are all so different.’ No, they’re not. It’s the same spirit going through the music, right from the Police and even before that. You can hear it.”

And you can hear it at a venue near you, or in the intimate confines of the Baked Potato.

After experimenting with effects and various instruments in the Police, Summers has settled on the Gibson 335 as his main axe. “t seems appropriate for this trio setting, warm and vocal sounding, which is what I like. It’s got a bit more warmth than a solid body. I’m playing through a Mesa-Boogie Diaxis, with a couple of Mesa-Boogie sealed-back cabinets. I use a PCM-70 for a bit of echo and a TC Chorus. Not much of anything, actually. Just enough.”

Pixinguiha: “one of the fathers of Brazilian music. He wrote all these choro melodies. Some of them are absolutely incredible and they’re great to play on guitar. It’s very vital music.”

Coleman Hawkins: “At the moment, I’ve gone nuts for Coleman Hawkins. His phrasing and timing are so great. That’s great stuff, timeless music. I’ve been listening to jazz, right across the board, more than anything.”

And, last and not least, Jobim records: “it’s partly having been down there (in Brazil) on the road for a month. (Collaborator, guitarist Victor Biglione) turned me onto some nice stuff. It’s oozing music down there.” Originally Published January 1, 1998

Put a “the” in front of a name and it acquires historical heft. The Thelonious Monk who entered New York City’s WOR Studios as Halloween … END_OF_DOCUMENT_TOKEN_TO_BE_REPLACED

On the enchanted evening of August 16, 1958, Ella Fitzgerald took to the stage of the legendary Hollywood Bowl. There, with a lustrous orchestra conducted … END_OF_DOCUMENT_TOKEN_TO_BE_REPLACED

Be careful what you wish for.  By the beginning of 2020 guitarist Mary Halvorson, one of the most acclaimed musicians of her generation, was also … END_OF_DOCUMENT_TOKEN_TO_BE_REPLACED

Guitarist Will Bernard bears the bittersweet blessing of virtuosic skill and eclectic taste, making his music a perpetual delight and yet hard to categorize. Maybe … END_OF_DOCUMENT_TOKEN_TO_BE_REPLACED