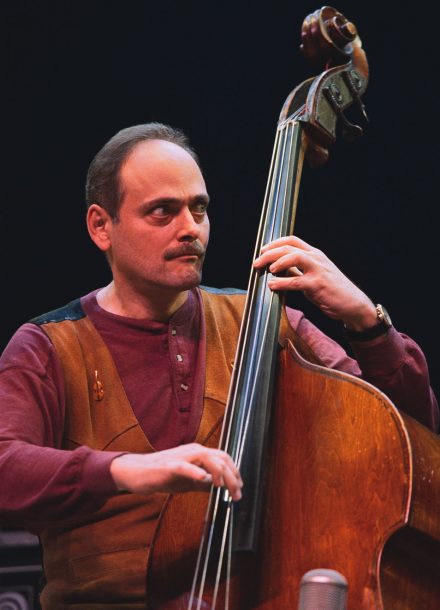 At a recent summit meeting of great Latin bass players held in San Juan, Andy Gonzalez was feted as the guest of honor. Most of the bassists in attendance, including Polito Huerta, Edwin “Muelense” Morales, Carlos Roldan, Efrain Hernandez, Johnny Torres and Freddie Rivera—all of whom are currently playing with the top salsa bands in Puerto Rico—had come up through the ranks listening to Gonzalez’s percolating bass lines on ’70s salsa recordings by the likes of Ray Barretto, Eddie and Charlie Palmieri, Johnny Pacheco, Hector Lavoe, Willie Colon and Chico O’Farrill. The younger ones among them, like Pedro Perez, had maybe first heard Andy in the ’80s with his Fort Apache Band, the groundbreaking Bronx-based group he formed with his older brother, the great trumpeter and conguero Jerry Gonzalez. Regardless of where they may have first encountered Andy’s playing, they all came up emulating his signature style. “Most of these bass players grew up listening to me and it’s nice to be honored,” he acknowledges with a laugh. “But I’m too young for that.”

Other young bassists on the scene today, like Avishai Cohen, John Benitez and Andy’s current protégé Luques Curtis, have sung his praises as an important teacher and mentor. And though he had been sidelined in 2004 due to some serious health issues, Gonzalez is now back on the scene and as active as ever. These days you can spot him playing every Sunday at Birdland with the Arturo O’Farrill Afro-Cuban Jazz Big Band. His 2005 Fort Apache Band tribute to Art Blakey, Rumba Buhaina (Random Chance), received wide acclaim and he’s planning an upcoming reunion with brother Jerry, who has relocated to Barcelona, for a Fort Apache Band appearance at the San Francisco Jazz Festival. Andy also appears on a spate of recent recordings, including Conrad Herwig’s Sketches of Spain y Mas: The Latin Side of Miles Davis (Half Note), Latin pop singer Xiomara Laugart’s self-titled debut on Chesky, Yerba Buena’s Island Life (Razor & Tie) and an upcoming project by Manny Oquendo & Libre. That’s saying a lot, considering how playing the bass was not something Gonzalez thought he would ever be doing again.

As he explains, “I was diabetic for years and didn’t know it…didn’t want to know it. I was in denial about it. And then one day I looked at my foot and the toes had gotten infected. It got bad and then all of a sudden it started turning black. And that was when the alarm bells rang. I was really in bad shape. I was so weak but I actually went and did a record date the day before I went into the hospital. I could play but I was so weak I couldn’t even take the cover off the bass, so I asked somebody in the studio to do it for me. So I played the session and then that night I called my friend to come and bring me straight to the hospital.”

During his two-month stay in the hospital, Gonzalez was on a continuous IV drip of antibiotics to kill the infection. The toes on his left foot were amputated and the wound still hasn’t fully healed. “It took me about six months to start playing again because so much antibiotics made my hands swell up like two ham hocks, and I couldn’t even bend my fingers. It was really tough but I did it in little steps at a time. I started doing exercises with my hands until all that loosened up. And gradually I started playing the bass again. As a matter of fact, when I was in rehab I had people come to me for lessons because I had my bass there.

“My health is improving,” he continues. “I’m out of rehab, I’m in my own apartment, I got all my records out of storage—about 40 boxes of classic jazz and salsa albums—and I get a visiting nurse who comes in and dresses my foot. That’s still in [the] healing process but it doesn’t stop me from walking short distances and from playing. It took a while but my chops are back now.”

On gigs you might see Andy playing one of two old acoustic basses—one German, the other Czech—which he’s had for 30 years. In the studio, he plays one of two electric Ampeg baby basses: a 1964 model his father bought for him when he was 13 or a 1965 model he acquired years later.

“I’m still dealing with the diabetes,” he maintains. “I exercise, I eat right, I take my two shots of insulin a day. Everything’s under control. But in the meantime, I’m more or less back on the scene. And as far as playing goes, it’s all upstairs in the brain. And as long as I can get my fingers to function, it can come out.”

Guitarist Will Bernard bears the bittersweet blessing of virtuosic skill and eclectic taste, making his music a perpetual delight and yet hard to categorize. Maybe … END_OF_DOCUMENT_TOKEN_TO_BE_REPLACED

At 95, Chicago-based guitarist George Freeman is among the world’s oldest active jazz musicians. Although he came of musical age in the 1940s and counts … END_OF_DOCUMENT_TOKEN_TO_BE_REPLACED

When you’re on TV, everybody knows you, or at least thinks they know you. Take Kevin Eubanks, who was on NBC’s Tonight Show five nights … END_OF_DOCUMENT_TOKEN_TO_BE_REPLACED