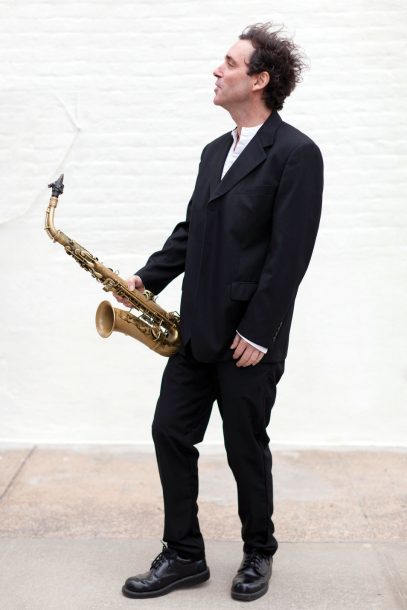 Make no mistake: Andrew D’Angelo’s ingenuity resides more in his alto saxophone playing and composing than in his singing. Yet on two consecutive January nights at 58 North Six Media Labs in Williamsburg, Brooklyn, he sang “I Love You,” one of the most soul-stirring compositions in his ever-expanding repertoire.

Standing in front of his piano-less big band, the 45-year-old explained to both packed houses how the song doesn’t involve the love one feels for a significant other or a family member; rather, it deals with the love a person has for oneself, especially when faced with great personal adversity. Once the ensemble began playing a somber waltz, the wiry-framed D’Angelo approached the microphone and crooned such pithy verses as “If I’m gone from here/I love you” in a charmingly flat tenor with questionable intonation. After trombonist Josh Roseman delivered a lamenting aside, D’Angelo grabbed his saxophone, tilted it upward and offered a eulogistic solo distinguished by his luminous, incisive tone. Afterward, for a moment, he looked like a spirited Pentecostal preacher who had delivered his most heartfelt sermon. The audience appeared transfixed by the song’s emotional immediacy, and rewarded D’Angelo with rousing applause.

When D’Angelo discusses his compositions, he often divides them into two categories: before-brain and after-brain. “I Love You” falls in the latter category. The “brain” part refers to the brain surgeries he underwent three years ago, after doctors discovered he had a tumor. On Jan. 25, 2008, D’Angelo woke up at Lutheran Medical Center in Brooklyn after having a seizure while driving his landlady to Costco. The seizure was so violent that he bit through his tongue, chipped a tooth and nearly broke his back. After doctors administered a CAT scan and saw a tumor, he was taken to the Mount Sinai Medical Center for surgery to have some of it taken out, but that surgery was unsuccessful, and the tumor was found to be cancerous. Three weeks later he went to the Memorial Sloan-Kettering Cancer Center to have his right frontal lobe removed.

After surviving the surgeries, D’Angelo embarked on a rehabilitation journey, working primarily with healers Peter Roth and Stewart Swerdlow. “One thing I was nervous about was how it was going to be to write music since my brain has been cut open,” he recalls one January afternoon in his spacious Brooklyn home. “I was like, ‘Oh, am I a different person?'” Six months after the surgery, he tested his mettle by writing a big-band arrangement of “Meg Nem Sa,” a composition originally configured in 1998 for trio. “What I realized post-brain was that writing was easier, because I could focus better,” he says. “Beforehand, having a huge tumor in my head made me a little foggy.”

On the first performance night, the Andrew D’Angelo Big Band opened with “Meg Nem Sa,” which was no easy task, especially considering that the musicians spent nearly seven hours that day recording. The composition calls for incredible physical stamina, speed and alertness, as various spiky melodies shift, overlap and crisscross with irrepressible force. He showcased other “after-brain” compositions and new arrangements, such as the equally boisterous “Free Willy,” a composition written for drummer Matt Wilson; a new arrangement of “Gay Disco”; and “Felicia,” a beautiful lullaby dedicated to Wilson’s wife, who is struggling with leukemia. As with “I Love You,” haunting vocals mark “Felicia,” but this time around it’s Nicole Federici who delivers a sterling solo, on viola. The concert also featured some of D’Angelo’s zanier “before-brain” compositions, such as “Marching Fuckers” and “Big Butt.” The latter composition showcased a bracing bass clarinet duet between D’Angelo and Josh Sinton, as well as a dazzling vocal beat-box performance from trumpeter Eric Biondo.

D’Angelo is an expressionist. On alto, he wields a visceral, heart-on-sleeve tone reminiscent of Julius Hemphill’s. Onstage, he exhibits the giddy antics of a comedian as he sometimes joshes unexpecting audience members. “When it comes down to it, I’m an entertainer,” he says. “I like taking the audience somewhere. It’s doesn’t always have to be laughter; it can be sadness. Sorry, man-life isn’t always about love and happiness. There’s shit that just happens. I’m not afraid to express that, musically or verbally.”

“He’s like a lightning rod,” says Roseman. “He attracts, generates, encourages and facilitates a lot of energy just based on his courage, karma and will. It comes out in the music, and it comes out in the way that he expresses himself politically and socially. There’s no compromise in what he’s putting out.”

D’Angelo’s big band fits in nicely with other adventurous recent large ensembles such as Darcy James Argue’s Secret Society and Fight the Big Bull. That said, D’Angelo’s exploration into that setting is no new enterprise. He was a member of the distinguished Either/Orchestra and led his own big band during his stint in Boston in the early ’90s. Even before that, D’Angelo’s history with big bands dates back to his Seattle days as a teenager, when he played in Fred Radke’s big band along with Chris Speed and Jim Black. “We all got hired to be in this weird, young dance band that was getting gigs for weddings and New Year’s Eve gigs,” remembers D’Angelo. Due to money issues, D’Angelo left Radke and formed his own large ensemble when he was only 15.

D’Angelo later immersed himself in avant-garde scenes when he first moved to New York in 1987, then to Boston in 1991 and back to Gotham City in 1994. But even after performing in such adventurous units as Human Feel and Tyft, D’Angelo explains that Ellington and Basie always stayed with him. “Even though some people may hear my arrangements as experimental or avant-garde,” he says, “there’s an element of Count Basie [in them], with him just basically playing three notes and swinging.”

But for all of D’Angelo’s love for big-band music, it was Roseman who kept encouraging him to come into 58 North Six Media Labs to document it. Regarding the significance of recording D’Angelo’s big band, Roseman says, “We’re in this era now where [jazz] musicians have gone through something equivalent of the Middle Passage, because of the economic recession and environmental and sociopolitical catastrophes. We really don’t know where we are now artistically, and it’s very under-documented. But the advantage of that is that a lot of people are coming out of the woodwork … to devise new solutions and new [business] models. So it makes sense to pursue these projects.” There’s no scheduled on-sale date for D’Angelo’s big band album yet, but Roseman reveals that in addition to the physical CD release the project will have an impressive online presence, with blogs, still photography, video footage and more.

In the more immediate future, however, is the new self-titled debut by AGOGIC, a funk-forward jazz quartet co-led by trumpeter Cuong Vu and featuring electric bassist Luke Bergman and drummer Evan Woodle. Vu taught Bergman and Woodle at the University of Washington, where D’Angelo was once invited to curate a series of weekend jazz workshops. “[Luke and Evan] have played together and developed their own approach that was also compatible with mine, so the bond is pretty strong,” says Vu. “We can play pretty freely and still deal with the same subject matter. It was pretty easy to just add Andrew in there as the free spirit.”

Only a few years apart in age, D’Angelo and Vu share a long history that traverses through Seattle, Boston and New York. The trumpeter even looks at D’Angelo as a mentor. “He had a huge impact on me opening up to different music and different ways of thinking,” Vu says. “Before I got to college, my idea of music was pretty limited. I hadn’t listened to a lot of music. I was pretty stubborn in how I thought music worked. I definitely hadn’t checked out much of the avant-garde stuff. He was the one who turned me on to that and challenged me.”

When asked if he’s noticed a difference in D’Angelo’s playing since the brain surgery, Vu says D’Angelo has always demonstrated a strong sense of urgency and fearlessness in his playing. If there is a slight noticeable difference, however, it would be in D’Angelo’s sense of humility. “There’s definitely a prima donna thing to him; he’s the star of the situation that he’s in,” Vu says. “He’s always demanded that kind of attention. That hasn’t changed. But he’s a lot more gracious about sharing the stage. He’s also more gracious in his relationship to other people.”

In addition to his musical pursuits, D’Angelo is finishing up an as-yet-untitled book that will detail his experiences with brain cancer. “I got left here for a reason,” he says. “And that reason is not just about being alive; it’s about expressing myself artistically and about documenting that expression.”

When you’re on TV, everybody knows you, or at least thinks they know you. Take Kevin Eubanks, who was on NBC’s Tonight Show five nights … END_OF_DOCUMENT_TOKEN_TO_BE_REPLACED

Jimmy Katz leads many lives. He is the preeminent currently active jazz photographer, and has shot more than 200 magazine covers and over 600 recording … END_OF_DOCUMENT_TOKEN_TO_BE_REPLACED

Take a look at Blue Note Records’ release schedule for 2022 and it’s hard to miss the significant percentage of electronic-oriented music. In March, the … END_OF_DOCUMENT_TOKEN_TO_BE_REPLACED