Skip to content
Become a member and get exclusive access to articles, live sessions and more!
Start Your Free Trial
Home > Features > An Overdue Ovation for Joseph Bowie 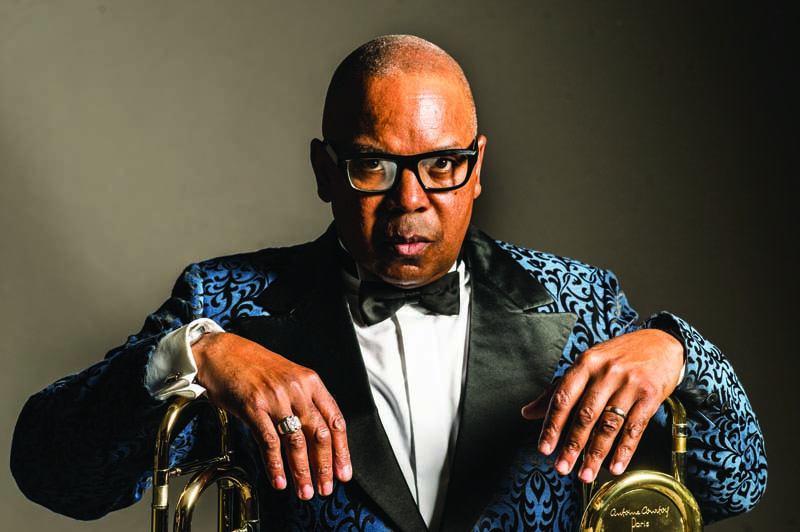 Defunkt’s recent ESP-Disk’ release, Live at Channel Zero, comes mostly from a 2015 gig at the Slovenian club named in the title. One track in particular, “Make Them Dance,” not incidentally the first cut on the punk-funk unit’s eponymous 1980 debut, embodies the band’s m.o. perfectly. Drummer Kenny Martin and bassist Kim Clarke lay down the thickest groove this side of Bootsy Collins, at a tempo typically reserved for workouts rather than boogieing. Guitarists Bill Bickford and Ronald “Head” Drayton add extra color. The decree is furthered by trumpeter John Mulkerin and Joseph Bowie, the ensemble’s leader, trombonist, vocalist and percussionist, when the pair delivers unison lines at the speed of bebop.

Once the audience is presumably following its lead, Defunkt chases the end-of-a-chorus breakdown to its logical conclusion, turning into a free-jazz group in the final minutes. The same energy that fueled the funk produces wild brass wails and rhythmic chaos. Not that the audience, roaring at the song’s end, seems to mind.

Bowie, 62, who formed Defunkt in New York more than 35 years ago, calls the band’s power “the Voodoo.” “This is something a lot of the jazz cats miss,” he says. “The rhythm-and-blues and the funk musicians know it. It’s the use of repetition. These bass and drum rhythms create a trance. That’s the Voodoo. A horn player can play whatever he wants on top. Once we get in that state of Voodoo, the audience is hypnotized.”

A resident of the Netherlands for the past 14 years, Bowie continues to tour Europe biannually with a “classic” lineup known as Defunkt Downtown in the ’80s (the unit heard on Channel Zero). Defunkt nEU Soul, a European version of the band, released Mastervolt (Zip) in the fall of 2015, a set of recent music that ranks among the group’s best work. In addition to the more experimental Ig-Bo Duet with multi-instrumentalist Adam Rudolph, Bowie also leads a project called Big Band Funk, which has involved conservatory bands in his new home, with plans for a Stateside version in early 2017.

Speaking via FaceTime from his home in Gorinchem, South Holland, Bowie says he picked up the trombone to complete the family horn section. Middle brother Byron played saxophone, and eldest brother Lester, who’d go on to cofound the groundbreaking Art Ensemble of Chicago, was on trumpet. Growing up in the rich St. Louis, Mo., scene of the 1960s, Bowie and his peers had to know all styles of music and then some; Bowie played everything from blues, with Albert King, to pop-R&B, with his now-former sister-in-law Fontella Bass, to the avant-garde. “We more or less played R&B to survive, and we played free jazz for love,” he says. “We were caught between the beboppers, the free jazz, the R&B and the funk. That’s my influence. And then I had another: The Jimi Hendrix influence was a big thing in high school. So I added rock and roll.”

Oliver Lake, who helped establish the Black Artists Group in St. Louis and would later launch the World Saxophone Quartet, remembers a teenage Bowie coming to the BAG sessions. “I guess he was 15 or 16 years old. He had an original voice. That’s what was so exciting about someone that age,” Lake says. “He was playing in these high registers. He could blast. He could get very soft and subtle. He had maturity beyond his age, in terms of the history.”

Following the lead of his big brother and the Art Ensemble, Bowie headed to Paris in 1971 with BAG members Lake, trumpeters Baikida Carroll and Floyd LeFlore and drummer Charles “Bobo” Shaw. While the stay lasted less than two years, their version of free jazz found acceptance almost immediately. “It even kind of surprised us how much interest there was in what we were doing,” Lake says. “At our first concert there was so much press there, and so many cameras, that we were kind of taken aback. I thought, ‘Wow, we don’t even have a recording!'”

By 1973, Bowie and Shaw had settled on New York’s Lower East Side at the height of the loft-jazz scene. During weekly performances at the La MaMa Theatre on Fourth Street, their music started to include some of the other styles from the St. Louis days. “We started incorporating this R&B vibe, with a little blues and a little funk, into the free jazz,” Bowie says.

James Chance, an alto saxophonist who brought free jazz to the avant-punk “no wave” scene at the end of the decade with the Contortions, witnessed those early shows. “They were mostly playing free,” he says. “Then it would go into funk rhythms, even though at the La MaMa they didn’t even have a bass player usually. Or even any rhythm besides drums.”

The meeting between Bowie and Chance proved fortuitous. When the Contortions disbanded, the frenetic saxophonist asked Bowie to help him form a new band with stronger rhythm-and-blues elements. Rechristened James White and the Blacks, Chance’s backing band pulled double-duty as the first lineup of Defunkt, which officially debuted in 1979. Hungarian playwright Janos Gat provided the compositions’ socially conscious lyrics, and Bowie’s brother Byron wrote the arrangements.

Defunkt drew a wide range of admirers, including future members of the Red Hot Chili Peppers and Miles Davis who, Bowie says, praised the band in interviews and invited the trombonist to his home. Lake says the original Defunkt inspired him to pursue his funky side with his band Jump Up. “It was funk but it wasn’t traditional funk,” Lake says. “I could still hear the Black Artists Group in what he was doing, and I think that’s what attracted me to the sound. He would sing these lyrics and have the funk beat going. Then all of a sudden he’d play some wild trombone solo over the top of it.”

While Defunkt spent most of its time in New York, with occasional tours to Europe, it made two memorable trips to Minneapolis in 1982, to play the landmark nightclub First Avenue. At the first show, an up-and-coming local named Prince insisted he top their shared bill. “We commenced to laying out a New York brand of rock/punk/funk that went over very well with the crowd. And we kicked ass,” Bowie recalls. “When Prince took the stage, the first thing he said was ‘Jazz is dead,’ which I kind of took offense at. I saw it at first as a dismissal of the New York punk-funk sound. But I kind of see it a little differently now.” In retrospect, he thinks Prince might have meant that new music was being born out of the older style.

Today, Bowie says it’s hard for his new work to get attention. “The only Defunkt band I can get a tour with now is [Downtown in the ’80s]. But I’m 30 years past that. I’ve got [new] music now,” he says. “As long as I’m breathing I’m going to try to get it exposed.” Whether it’s Live at Channel Zero with the ’80s band or the hot European unit of Mastervolt, the Voodoo continues. “It’s all music. It’s just an energy. It makes your ears react differently and it makes your soul act differently,” Bowie says. “That’s what I’ve been trying to do for 62 years. I grew up believing that’s the way it should be done. All music is just ‘Do it right, do it well.'”

Jimmy Katz leads many lives. He is the preeminent currently active jazz photographer, and has shot more than 200 magazine covers and over 600 recording … END_OF_DOCUMENT_TOKEN_TO_BE_REPLACED

Take a look at Blue Note Records’ release schedule for 2022 and it’s hard to miss the significant percentage of electronic-oriented music. In March, the … END_OF_DOCUMENT_TOKEN_TO_BE_REPLACED

Those who are only familiar with bassist Martin Wind’s jazz credentials—both as a leader and as a first-call sideman for Bill Mays, Dena DeRose, Ken … END_OF_DOCUMENT_TOKEN_TO_BE_REPLACED

Have saxophone, will travel. With apologies to Paladin, that sums up the career of reed player Greg Abate. Since the early 1990s, he’s been a … END_OF_DOCUMENT_TOKEN_TO_BE_REPLACED