Skip to content
Become a member and get exclusive access to articles, live sessions and more!
Start Your Free Trial
Home > Features > An Overdue Ovation for Dave Stryker 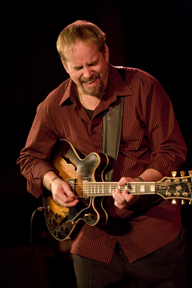 On the first Tuesday of May, guitarist Dave Stryker performed, as he does every month or so, in the cozy confines of the Bar Next Door, a lounge/café located in the basement of a 19th-century row house on MacDougal Street. Stryker has a long history in that neck of Greenwich Village. Two doors north, at the corner of West 3rd Street, are the former premises of Visiones, an important but long-defunct club where, 28 years ago, Stryker first co-led a band with saxophonist Steve Slagle; that partnership has since thrived through six recordings by the Stryker/Slagle Band, most recently Routes, on the guitarist’s Strikezone imprint. A right turn and short walk along 3rd Street would bring you to the Blue Note, where Stryker gigged with Stanley Turrentine in September of 2000. At the time Stryker had recently returned to touring with the tenor great, following a four-year hiatus that was preceded by a decade of service.

“We played Portland and Vancouver before that week at the Blue Note,” Stryker recalled at the Bar Next Door, before hit time with organ maestro Jared Gold and drummer McClenty Hunter, his working trio. He sat in an empty dining room next to the performance area, where 15 patrons-enough to make the room feel full-were already seated. “On Saturday night Stanley played his ass off. He was great, got a standing ovation. When we got to the gig for the final night-no Stanley. He’d died that afternoon in his hotel room.”

Stryker, 59, pays homage to his former employer on his 2015 CD, Messin’ With Mister T. For his 28th release as a leader, he convened nine formidable tenor saxophonists, aged 30 (Tivon Pennicott) to 90 (Jimmy Heath), to blow on nine just-arranged-enough tunes associated with Turrentine, among them “Sugar” (Javon Jackson), “Impressions” (Chris Potter), “Gibraltar” (Bob Mintzer), “Don’t Mess With Mister T” (Don Braden) and “La Place Street” (Houston Person). Slagle plays alto sax on the lone Stryker original, a funk-drenched blues called “Sidesteppin'” that mirrors the repertoire of Jack McDuff, with whom Stryker spent the mid-1980s on the chitlin’ circuit. He’d met Slagle a few years earlier, on an audition gig for McDuff at the Lickety Split Lounge in Harlem. “Jack and Stanley set a very high bar,” Stryker said. “You couldn’t just follow their solo; you had to be strong to deal. They were super soulful, played from the heart, killing time feel, no holds barred-100 percent of the time.”

With this, Stryker tabled the conversation to prepare for the first set, for which the trio had neither soundchecked nor rehearsed. Ten minutes later, his lustrous, centered, ringing tone was at the service of a simmering, songlike “Street of Dreams,” referencing and refracting Grant Green’s 1964 Blue Note performance with Larry Young, Bobby Hutcherson and Elvin Jones. Perhaps thinking of that configuration, Stryker followed with two hat-tips to guitar heroes of another genre: Curtis Mayfield’s “Pusherman,” addressed with grease and deliberation in equal measure, and “Wichita Lineman,” a Glen Campbell vehicle, on which Stryker’s arrangement seamlessly inserted tempo and key changes into the flow. (Both of those tunes are featured on 2013’s Eight Track, a program of Stryker’s ’70s favorites that matches the trio with vibraphonist Stefon Harris.) There followed an “Impressions”-esque burner aptly titled “Shadowboxing,” a soulful bossa interpretation of Quincy Jones’ “One Hundred Ways,” a crisp samba-jazz number called “Pro Zeca” and a four-to-the-floor shuffle blues.

After this impeccable, challenging, stylistically varied set, Stryker returned to conversation over a dinner of pizza and salad. “I like to put it in the pocket and swing, but I also like to stretch harmonically, play some different shit than just straight down the middle,” he said between bites. “Stanley and McDuff communicated. People had a good time. There was no bullshit-a tight band improvising within the context of tunes that were hits for them. McDuff told me once, ‘Stryker, you look out at the audience and they ain’t doin’ this'”-the guitarist nodded his head to an imaginary beat-“‘then you’re doing something wrong.'”

The sensibility that allowed Stryker to adapt so comfortably to these demanding employers developed during his formative years in Omaha, Neb. The son of a doctor who spent 30 years running an emergency room, he started guitar lessons at 10, when he purchased his first LP, Cream’s Disraeli Gears. By his mid-teens he was playing rock gigs, using his lexicon of Eric Clapton and Duane Allman licks. “I realized that the Allman Brothers and Santana were stretching out, improvising,” he said. “One day I went to a jam session at the union, and a bunch of dudes were playing ‘Song for My Father.’ I got up with my Tele and started ripping. A guy told me afterward, ‘Man, you can’t be playing that rock-and-roll shit; this is jazz.’ I don’t know if I’d ever heard that word. I went to the record store and got a Coltrane record and a George Benson record, then started hearing Wes and Pat Martino. I got hooked, and got my buddies hooked. We played top-40 music on gigs, and played Joe Henderson tunes and standards at sessions. A local sax player took me under his wing and showed me a lot of tunes.”

In the spring of 1975, soon after those jam sessions and record purchases, Gary Burton brought his new two-guitar quintet with Mick Goodrick and Pat Metheny to play a concert at Stryker’s high school gym opposite Gerry Mulligan and Clark Terry. “Pat’s record wasn’t out yet, and I hadn’t heard of him,” Stryker recalled. “But I introduced myself and asked what jazz records I should buy. Pat said, ‘Check out Jim Hall.’ I asked for a lesson, and went over to the Roadway Inn the next day. Pat told me I had to hear this amazing bass player named Jaco. Next month Bright Size Life came out, which for young guitar players then was like Jaco’s first record-a new approach. After a while I had to stop listening to Pat, because you can end up emulating somebody too much. You’ve got to move on and work on your own voice. But when you hear guys not that much older than you playing great, it kicks you in the butt to get your own thing together.”

While following his self-taught path during these years, Stryker was able to measure his development against Omaha-born guitar virtuoso Billy Rogers, who moved to Los Angeles in 1976 after replacing Larry Carlton in the Crusaders. In 1978 Stryker followed Rogers to L.A., where he marinated until a fateful visit to New York in early 1980 inspired him to head east. “At 3 in the morning I was listening to George Coleman, Harold Mabern, Al Foster and bassist Clint Houston, who always played these eighth-note solos, and they were playing ‘Cherokee’ or something, just burning, and I’m like, ‘OK, I need to be here,'” Stryker said. “I drove back to L.A., played that summer in a top-40 band, made some money, came back, and I’ve been here ever since.”

Set two was imminent, and it was again time to nip the conversation. “I love improvising,” Stryker concluded. “Jazz music is about swing, rhythm, blues and improvising. That mystery of not knowing where the music is going to go or what exactly you’re going to play-there’s nothing like it. Sometimes it gets crazy, and there’s a lot of dues, trying to keep your own thing going, making gigs happen and making a living at it. But it’s a real gift and an honor to be able to pick up your instrument and play and create. That makes it worthwhile.”

When you’re on TV, everybody knows you, or at least thinks they know you. Take Kevin Eubanks, who was on NBC’s Tonight Show five nights … END_OF_DOCUMENT_TOKEN_TO_BE_REPLACED

Jimmy Katz leads many lives. He is the preeminent currently active jazz photographer, and has shot more than 200 magazine covers and over 600 recording … END_OF_DOCUMENT_TOKEN_TO_BE_REPLACED

Take a look at Blue Note Records’ release schedule for 2022 and it’s hard to miss the significant percentage of electronic-oriented music. In March, the … END_OF_DOCUMENT_TOKEN_TO_BE_REPLACED