Skip to content
Become a member and get exclusive access to articles, live sessions and more!
Start Your Free Trial
Home > Features > An Overdue Ovation for Carl Allen 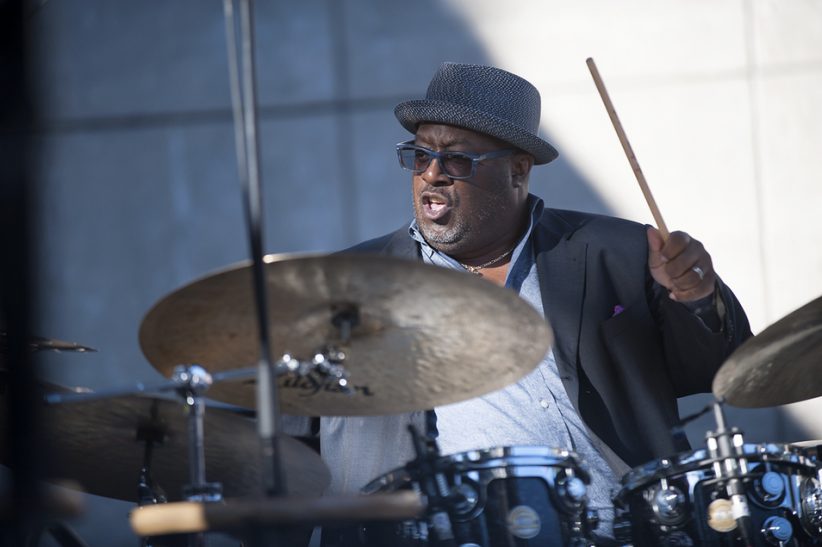 During the summer of 2015, for the first time ever, Carl Allen took a vacation. “I wanted to take a month off to cleanse myself,” the 55-year-old drummer said a year later, over lunch in Brooklyn’s Fort Greene neighborhood. “I realized that I needed to let go of some baggage.”

Mostly, he was trying to counter a bit of negative emotional residue. During the 2013-14 academic year, the Juilliard School decided to replace Allen with Wynton Marsalis as its director of jazz studies. “I wasn’t given a reason,” Allen said. “The president told me I was doing a great job, and was definitely getting a new contract. Then I started hearing rumors.”

During his five-year tenure, Allen considered it his obligation “to find a way to bring the bandstand to the classroom.” To that end, he created opportunities for students to not only play with guest artists like Ron Carter and Branford Marsalis, but, as he put it, “to be able to act like you’re in their band. … I thought about how to duplicate what I’d been able to do in my life,” Allen said. “When I was younger, people could hear you sit in at, say, the Village Vanguard. Now, not so much. The question became how to make it possible for these young people to be heard. When a guest artist did a concert, we’d do their music. I’d tell them not to dumb down. I told the students, ‘Whenever somebody comes here, you’re being auditioned.'”

Allen recounted his own protracted audition experience with Freddie Hubbard, who employed him steadily from Nov. 12, 1982-he remembers the exact date-until the trumpeter’s embouchure collapsed during the first half of the 1990s. The process began in October 1981, not long after Allen had matriculated at William Paterson University in New Jersey. He was there at the urging of drummer Mel Lewis, who befriended him during a four-day residency at the University of Wisconsin, Green Bay, during Allen’s freshman year.

Hubbard, who stated in a then-current DownBeat cover story that he was “looking for a young drummer with fire,” was playing at the now-defunct club Fat Tuesday’s, located in Manhattan’s Gramercy neighborhood. Allen went to the venue, magazine in hand, to introduce himself. “I said, ‘You’re looking for a young drummer with fire: I’m young, and I’ve got fire.’ He asked where I lived, and asked for my number.”

No call arrived, but back home in Milwaukee the following summer, Allen twice encountered Hubbard at the hotel club where he and bassist Gerald Cannon were backing a singer. The second time, Hubbard offered him the job. “I said, ‘Freddie, it would be cool. But we need to go over a couple of things.’ ‘What?’ I said, ‘I heard stories of you kicking cats’ drums off the stage. [Let me] just tell you something: If you ever kick my drums off the stage, we’re gonna rumble.’ He looked at me. He said, ‘What else?’ I said, ‘You’re going to have to respect me as a man and pay me all my money on time.’ ‘What else?’ ‘That’s it.’ He said, ‘I’m going to Europe and Japan. When I come back, we’ll get started. I’ll have my manager call you.’ ‘OK. You make sure he calls me.’

“After a few years, we were having lunch, and I asked Freddie why he hired me, when all these cats were out there. ‘Remember what you told me in Milwaukee?’ ‘Yeah.’ ‘That’s why I hired you. You could stand up for yourself. I respect that.’

‘That’s right! You still better pay me all my money.'”

Asked how he worked up his nerve, Allen said simply, “I grew up in the Hillside Projects in Milwaukee.” He elaborated: “I’m the youngest of five kids, just raised by my mother. My older brothers made sure I stayed in line. They always taught me to stand up for myself. I was a little arrogant anyway, being the baby and spoiled. But I was always raised to be respectful, particularly to older people. So talking to Freddie like that was an out-of-body experience.”

By the time of that lunchtime conversation, Allen, doing double duty as Hubbard’s road manager, was disbursing his own checks. In 1987 Art Blakey, one of Allen’s core stylistic models and a tough-love mentor since his early New York days, told Japanese producer Makoto Kimata to give his acolyte a record deal. The ensuing five albums, cut for Alfa Jazz under the billing Manhattan Projects, included early showcases for Roy Hargrove (Dreamboat and Piccadilly Square, both recorded in 1989) and Nicholas Payton (The Dark Side of Dewey, recorded three years later). A month after Blakey’s death in October of 1990, Allen booked a “40th Anniversary Tour” for Japanese drummer and Blakey disciple George Kawaguchi, on which he played alongside his other core drum hero, Elvin Jones.

During the late 1980s Allen played regularly with distinguished elders like Jackie McLean, George Coleman and Benny Golson. From 1987 to ’89 he propelled Terence Blanchard and Donald Harrison’s influential band, in a rhythm section with pianist Cyrus Chestnut and bassist Reginald Veal. Allen incorporated the rhythms of Congo Square and second line to create a syncopated-offbeat feel-or, to say it another way, an updated backbeat-seasoned with flavors drawn from, as Harrison said, “the cutting-edge style of playing in New York.”

Harrison retained Allen and Chestnut in his quartet after parting ways with Blanchard in 1989, and used them on Indian Blues, an important Candid label date that introduced “nouveau swing” to the jazz lexicon. “I told Carl I wanted some funky bass drum with the swinging ride cymbal, and he got it immediately,” Harrison said. “Without Carl, the funky ‘nouveau swing’ wouldn’t have come-at least its funky side, and the idea of adding and mixing hip-hop rhythms, funky music and soul music. My nephew Christian Scott will tell you that record was the impetus for a lot of his ideas.”

McBride positions Allen among such generational peers as Jeff “Tain” Watts, Marvin “Smitty” Smith, Lewis Nash, Ralph Peterson and Cindy Blackman Santana: drummers who amalgamated the developments of post-fusion drumming with the rhythmic vocabulary of acoustic jazz. “Carl was always somewhere right in the middle,” McBride said. “His style was heavy with the ingredients of Art Blakey and Elvin Jones, but also infused with elements from Tony Williams or Jack DeJohnette. It never got too fusiony, but was never so traditional that you couldn’t be flexible and stretch with your rhythms.

“His signature is his time feel, which is distinctive and incredibly comfortable. As a bass player you always have to make subtle adjustments to a drummer to find common ground. But I can honestly say that I have never had to make one single adjustment when playing with Carl. He quickly figures out exactly what you want to do as a soloist or a rhythm section player. He still plays what he wants while serving the music tenfold. I think that’s a reflection of his personality.”

Allen devoted an equivalent level of attention to his duties at Juilliard, which initially employed him in 2001 as professor of small ensembles and drums. “If I wasn’t on the road, I was there every day, all day,” he said. “A lot of friends told me that the kind of time commitment I put in was not normal. I did it because that’s what I felt needed to be done. But I also felt that I’d lost a couple of steps in my playing. I really took that time off to just practice.”

It’s hard to discern any diminution of Allen’s skills in his recent recordings-Get Ready and Work to Do, the two Mack Avenue albums he co-leads with bassist Rodney Whitaker; and the four CDs by the Mack Avenue SuperBand released between 2012 and 2015. Still, McBride asserted that Allen’s hiatus had the desired result. “Carl’s playing has become more distilled, shall we say,” McBride said. “We did two or three gigs in a row after the Juilliard thing came apart, and I noticed that his playing was on fire, like in the Freddie Hubbard era. Later, I told him, ‘I’m not saying you haven’t sounded great, but you sound more inspired than I’ve ever heard you.’ Carl told me, ‘Now that Juilliard is not there, it’s time for me to reconnect with my drums like never before.’ I thought that was an understatement. Carl Allen is back with a vengeance.”

When you’re on TV, everybody knows you, or at least thinks they know you. Take Kevin Eubanks, who was on NBC’s Tonight Show five nights … END_OF_DOCUMENT_TOKEN_TO_BE_REPLACED

Jimmy Katz leads many lives. He is the preeminent currently active jazz photographer, and has shot more than 200 magazine covers and over 600 recording … END_OF_DOCUMENT_TOKEN_TO_BE_REPLACED

Take a look at Blue Note Records’ release schedule for 2022 and it’s hard to miss the significant percentage of electronic-oriented music. In March, the … END_OF_DOCUMENT_TOKEN_TO_BE_REPLACED