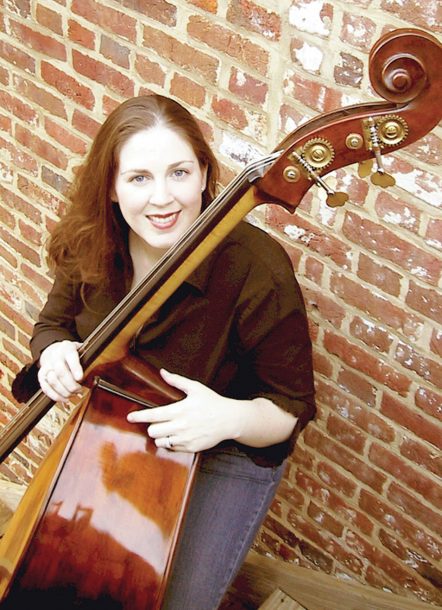 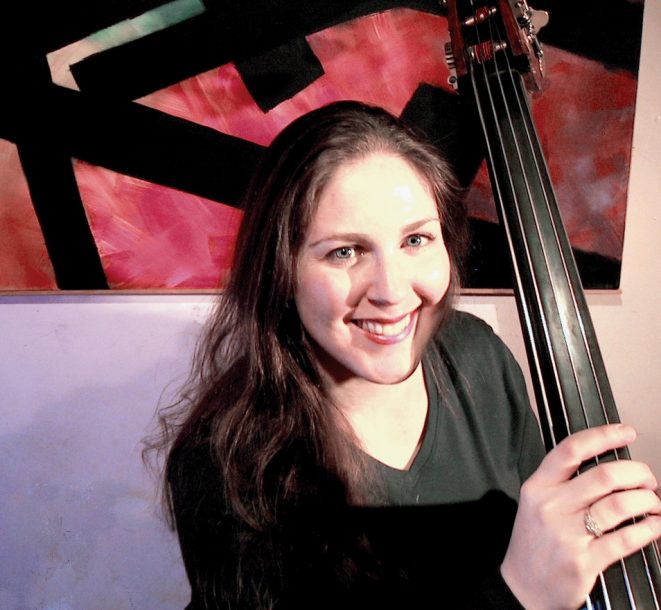 Amy Shook speaks in exclamation points. During a thirteen-minute conversation about her music at the Cape May Jazz Festival this past April, the 36-year-old upright bassist’s voice rises markedly in pitch and intensity no less than five times.

“Oh wow!” she exclaims alto voce when asked about her aspirations for her Washington, D.C.-based, traditional-style jazz ensemble with Frank Russo – the Shook/Russo Quartet.

“To have the opportunity to play [our music] more and more to just have people hear it!” she gushes.

Her enthusiasm for her music – and jazz in general – is matched by her surprised pleasure at being asked for an interview for a prominent national magazine, just as she still gurgles with excitement when discussing the band’s invitation to play at Cape May. For even after recording two of their own albums on the Summit Records label (The Shook/Russo Quartet featuring Greg Gisbert in 2006; So Far From Home in 2009) and another comprising Amy, Frank Russo and pianist Bob Butta under the name the FAB Trio (The Shook/Russo Trio featuring Bob Butta: Introducing the FAB Trio in 2007) and playing together as the Shook/Russo Quartet for seven years, it all still seems like a gift to the Idaho-raised string player.

“We — and I — are just so thankful we get to do this and that people enjoy it,” she says.

Yet despite her fresh exuberance, performing jazz for appreciative audiences isn’t at all foreign to Amy, nor her bandmates: her husband, saxophonist Pat Shook, drummer Frank Russo and pianist Tim Young, all of whom have made their living as professional performers for years. Amy and Pat both have multiple academic music degrees to their credit; Pat and Tim hold permanent seats with the U.S. Army Jazz Ambassadors; and Frank, after retiring from the Naval Academy Band, went on to his current position as Professor of Drum Set Studies at Towson and Shepherd Universities. Further, they’ve independently toured the globe with artists such has Lionel Hampton, Maureen McGovern, Bobby Watson, Walt Weiskopf and Phil Woods.

But it’s one thing to play back-up at someone else’s gig (which the FAB Trio frequently does as a unit) and quite another to arrive with your own name in lights.

“As great as it is to be a sideman, this is our thing,” Amy glows.

Although the quartet covers a great many straight-ahead standards like “I Want a Little Girl,” made famous by Nat King Cole and Horace Silver’s “St. Vitus’ Dance,” playing under their own banner gives them the opportunity to share the music they’ve written. They derive their inspiration from jazz’s older masters – think Oscar Peterson, Charlie Parker and Paul Chambers – and later adopters such as Medeski Martin and Wood, and John Scofield. Amy, for her part, chose her career path at age 14 when she first heard Dizzy Gillespie, Carmen McRae, Lionel Hampton and the Ray Brown Trio at the Lionel Hampton International Jazz Festival in Moscow, Idaho.

Currently, quartet members are experiencing a growth spurt vis a vis their recognizability as they work to push their popularity out beyond the D.C./Baltimore/Annapolis metro region. They’re encountering gracious welcomes from increasing numbers of scattered North American festival programming boards and from jazz fans in Japan, where their albums are selling briskly online.

But according to Amy, it’s unfortunate that she and her band would have likely gotten zero acceptance or exposure less than a musical generation ago, when it was taboo for a woman to play bass or drums. Even today, she says, presenting with a female bass player can too often handicap a band’s reputation and bookings. Earlier in her career she consistently bumped up against musicians scheduled to appear with her who vocally prejudged her ability to keep up.

“Before I even played a note I was given all kinds of bad vibes: ‘Oh my God, there’s a woman on bass, this is gonna suck,'” she repeats.

But Amy doesn’t hear such misogynistic grumbling anymore, thanks to her being better known on the local scene and because of the number of respected musicians who respect her. As she says, when someone like Bob Butta, who has played the circuit for decades, invites her to join him on stage, cynics tend to stop doubting her skill.

Further, positive exposure in the press has helped seal her acceptance as a bassist – of any gender.

“If you have a high-resolution audio system, the power and depth of Amy Shook’s bass on Just You/Just Me will remind you why you spent all that money,” Thomas Conrad wrote, in this magazine in October 2007.

And such praise brings immeasurable relief to one of the nation’s only female professional upright jazz bassists – an instrumentalist so dedicated to her craft that she earned two bachelor’s degrees and a master’s in music from the Lionel Hampton School of Music in Idaho, where she met her husband and fellow quartet member.

“The human element is so present in jazz because it’s complete self-expression,” she eulogizes.

And when it comes right down to it, I really feel like I’m not cut out for anything else!” she says, as she concludes her sentence with a characteristically grateful exclamation point.

In its near-century of excellence, The New Yorker has been home to more than its share of tops-in-their-field contributors. There’s E.B. White, with his luminous … END_OF_DOCUMENT_TOKEN_TO_BE_REPLACED

Put a “the” in front of a name and it acquires historical heft. The Thelonious Monk who entered New York City’s WOR Studios as Halloween … END_OF_DOCUMENT_TOKEN_TO_BE_REPLACED

On the enchanted evening of August 16, 1958, Ella Fitzgerald took to the stage of the legendary Hollywood Bowl. There, with a lustrous orchestra conducted … END_OF_DOCUMENT_TOKEN_TO_BE_REPLACED

Be careful what you wish for.  By the beginning of 2020 guitarist Mary Halvorson, one of the most acclaimed musicians of her generation, was also … END_OF_DOCUMENT_TOKEN_TO_BE_REPLACED