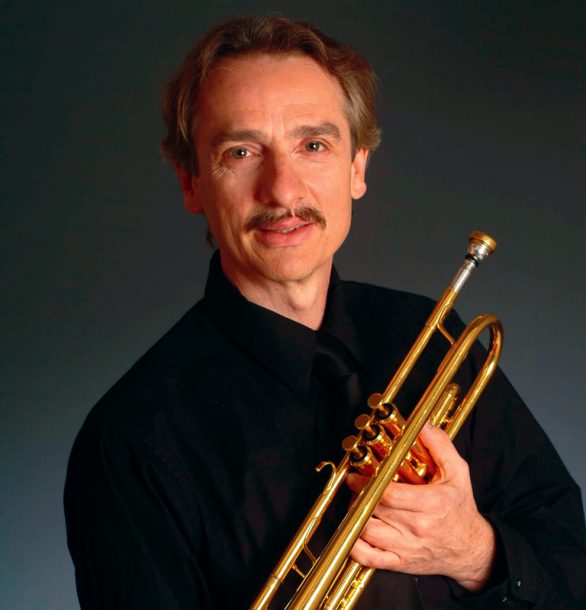 Allen Vizzutti recorded his new album, Ritzville (Village Place), in Seattle last fall. That was an unusual move: Although Vizzutti has lived in the area for more than 20 years, he rarely works there. “There’s some jazz here, for sure,” the 59-year-old trumpeter explains. “But the better jazz clubs are for big-name people who are traveling through. And then [there’s] a tier that’s not as inviting for me; it’s more of a young people’s kind of scene.”

Instead, Vizzutti has other gigs-all over the world, throughout the year. A virtuoso who’s as fluent in classical as he is in jazz, Vizzutti can perform chamber recitals in Finland with his wife, Laura, a pianist, then fly to Washington D.C. to guest with the Airmen of Note-both of which he does fairly regularly. He’s also a renowned educator, and much of his heavy travel is to colleges; recently, he held master classes in Nevada and Illinois, and performed with a university big band in Valencia, Spain.

But that’s only the latest phase of a career that also found Vizzutti working in Los Angeles on more than 150 film and television scores, as well as other freelance studio projects. He was the first-call substitute trumpeter for Doc Severinsen’s Tonight Show band, where he played “every trumpet chair,” and spent residencies in Woody Herman’s New Thundering Herd and in Chick Corea’s fusion band of the late 1970s and early ’80s.

“Al’s one of the world’s great trumpeters,” says bassist Stanley Clarke. “If you want a trumpet player who can play jazz-or anything else-and he’s in the area, that’s the guy you want.”

Clarke and Corea both appear on Ritzville, a glossy combination of the many styles in which Vizzutti excels: funky fusion, straightahead, pop-jazz, vocal accompaniment. There are even pieces that include a sumptuous string section, with arrangements that elude both to the epic sweep of film music and the more complex textures of classical orchestration. “I just kinda followed my heart in the direction I wanted to go,” Vizzutti says.

There’s another classical element that’s pervasive on Ritzville: Vizzutti’s sound. Even when performing a rocker or blues, his playing is round-toned, crystal clear and precisely articulated. (The same is true for Vizzutti on flugelhorn and piccolo trumpet, which he also plays on the disc.) Unsurprisingly, his dream while growing up in Missoula, Mont., was to be a classical trumpet soloist.

Vizzutti’s father, Lido, was his first teacher on the instrument. “He was just an around-the-house sort of trumpeter,” Vizzutti recalls. “Self-taught, never really pursued music as a career; the only jobs he ever did were when he was in high school. But he’s a very talented person-in many ways, not just in music.”

It was enough to inspire his young son, who showed so much talent and dedication to the instrument that at 16 his parents sent him to the Summer Arts Camp in Interlochen, Mich., where he joined musicians from around the globe in the World Youth Symphony Orchestra as first trumpet chair. When it came time for college, he and his parents “never even had a discussion of whether or not I should go into music. We just sat down and said, ‘Let’s try and figure out what music schools are good.'” When Eastman School of Music in Rochester, N.Y., offered him a scholarship, the decision was made.

Though he had played some jazz in Missoula, it was at Eastman that Vizzutti fell in love with it, encountering the music of Miles Davis and the lessons of teachers like Bill Dobbins. He joined a quintet, made up of musicians who were better than he was. “I had to hang on for dear life,” Vizzutti recalls, “which is a really great way to learn.” He also began playing with the Rochester Philharmonic, balancing both with his Eastman classes and participation in the school’s symphony orchestra and big-band ensembles. When he graduated in 1976, he had the choice between first trumpet in either the San Antonio Symphony or Woody Herman’s New Thundering Herd. Vizzutti’s solo ambitions pushed him in Herman’s direction.

Within a few months, he had toured Europe, performed with such special guests as Dizzy Gillespie and Tony Bennett, and played Carnegie Hall for Herman’s 40th Anniversary Concert with many of the band’s alumni. By early 1978, though, he realized that playing lead in a big band wasn’t what he wanted-“It wasn’t creative enough,” he says. Fortunately, he had made important connections through the Herd, including keyboardist Chick Corea, whom he met when Corea wrote a piece for Herman.

“I was at rehearsal with the band, and thought, ‘Who is that trumpet player?'” Corea remembers. He hired Vizzutti for a three-month tour, and the trumpeter joined the band that recorded the album Secret Agent later that summer. He would remain with Corea for four years, touring with his sextet and recording two more albums with him and one with his future wife, singer and keyboardist Gayle Moran. Corea would even ask Vizzutti to perform at their wedding. “I always loved Al’s insouciance on the trumpet,” says Corea. “He makes the trumpet do a tap dance.”

Vizzutti also recorded the first albums under his own name during this period, in the same vein of fusion-a term he professes to hate-that he pursued with Corea. (Tracks from two of these albums, 1979’s A.V. and 1982’s Red Metal, were compiled by Summit Records onto the 1997 release Skyrocket.) By then living in Los Angeles, he left Corea to form his own band, which he led for the next eight years. His main revenue stream, however, was as a Hollywood session player, working on various studio recordings as well as on the soundtracks to films like Back to the Future and the Star Trek series. He also began subbing in the Tonight Show band. Vizzutti was too busy to record his own band.

Moving from L.A. to Seattle in 1990, however, allowed him to come into his own. Though he continued to get some freelance calls, he was finally able to focus on his career as a soloist. Since then he’s been traveling to far-flung corners of the world to perform. He tours with all kinds of ensembles, but even when performing his own material, Vizzutti doesn’t front his own band. “In certain niches I’m really well known, but in the mass niche I’m not,” he explains. “And if you take a group out on a tour and you’re paying for everything, including the musicians’ expenses, and people don’t show up, you’re just gonna go down.

“The music of my creation can be in a big-band genre, or the small-group genre, or the symphony-orchestra genre. And I do that a lot,” he adds. “It just involves playing with an orchestra or group that is already established.”

Last year, however, Vizzutti became acquainted with some fans-“well heeled, shall we say”-who wanted to sponsor him. “[They said,] ‘You know what? Let’s figure out how to get a recording, whatever you want to do, and see if we can’t help you slide things over to playing your own music with your own people,'” he says. “They were really terrific, amazing people who do a lot for a lot of people.”

Among other things, Vizzutti was able to choose his own musicians, including wife Laura, guitarist Mike Miller, Corea and Clarke. “[Al has] always been a joy to work with,” says Corea. “I’m glad he asked me to participate.”

“He had his stuff together,” adds Clarke. “He had a good studio, an engineer who was together, a good sound. The music was cool. Now it seems like Allen wants to project himself, to connect to people.”

He does. He’d like to tour with the Ritzville band, as well, but doesn’t yet have the resources. Instead, he continues his regular rounds of the world musical circuit, taking whatever opportunities he can to perform and promote his own music. It’s a restless, somewhat unpredictable life, but one he’s managed to make work for himself. “It sounds really, really rocky,” he chuckles, “but in actual fact I turned out to be more solid than [my friends with business backgrounds].”

In its near-century of excellence, The New Yorker has been home to more than its share of tops-in-their-field contributors. There’s E.B. White, with his luminous … END_OF_DOCUMENT_TOKEN_TO_BE_REPLACED

Put a “the” in front of a name and it acquires historical heft. The Thelonious Monk who entered New York City’s WOR Studios as Halloween … END_OF_DOCUMENT_TOKEN_TO_BE_REPLACED

On the enchanted evening of August 16, 1958, Ella Fitzgerald took to the stage of the legendary Hollywood Bowl. There, with a lustrous orchestra conducted … END_OF_DOCUMENT_TOKEN_TO_BE_REPLACED

Be careful what you wish for.  By the beginning of 2020 guitarist Mary Halvorson, one of the most acclaimed musicians of her generation, was also … END_OF_DOCUMENT_TOKEN_TO_BE_REPLACED