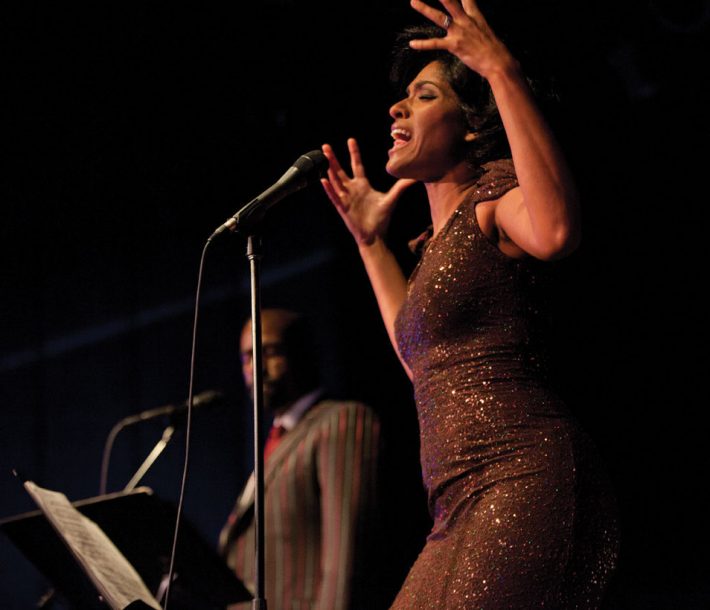 Alicia Hall Moran’s stage entrance is slow, her gait worn smooth: feet-first, measured grace, both deliberate and natural. Down to the sequins, details carry the weight of the mezzo-soprano’s full attention; every snap, spin and sashay suggests a ritual in motion. But all this stagecraft works less like a shtick than as an act of conjuring-a ginning-up of the performative force necessary to embrace tradition, and push it further.

On Friday, June 21, at Manhattan’s Highline Ballroom, Hall Moran reprised her critically acclaimed motown project, a surreal reimagining of classical, soul and pop music that laid Mozart and Marvin Gaye side by side over the strange brew of husband Jason Moran on Fender Rhodes, Tarus Mateen on electric bass, Kaoru Watanabe on the ancient Japanese taiko drums and bamboo flute, Thomas Flippin on guitar and theorbo (a towering, largely outmoded lute) and the baritone Steven Herring.

It should have been a sendup. Instead, the result was a kind of musical decanting. In tones sweet and smoky, Hall Moran coaxed her repertoire from its contextual baggage (both classical Europe’s and midcentury black America’s), making dust-covered arias sweat and steam while peeling back the high emotional drama roiling underneath hits like “Please Mr. Postman” and “Sugar Pie Honey Bunch.” Would Brahms have been bruised by a roomful of cabaret-goers hooting naughtily at “Der Jäger”? What would Diana Ross make of her lines in “Love Child” being trilled as a libretto? Watching Hall Moran that night, the audience was left to imagine that the singer’s forebears would, like she, consider these choices deeply, and smile.

“Motown, for me, is about reclaiming all that time that I loved pop music and R&B but could not do it-at all,” explains Hall Moran. “So this is my in, but I’m no fool. I’m using my head-voice, and there are 99 ways for that to go wrong and be a bad joke about opera and pop music, or be a bad joke about black people and white people. And I’m not making a joke. I’m damn serious.”

Alicia Hall was born in 1973 in Redwood City, Calif. She began singing three years later, when her family moved, for a time, to New York City. There, Hall was playmates with the daughter of a woman who would later become her teacher, the world-famous operatic soprano Shirley Verrett. “She always made [singing] her own thing,” recalls Hall’s mother, Carole Hall. “But it was that voice going up and down our street-of one of the greatest singers in the Western world-that was the voice Alicia grew up with in her ears.”

Hall decided to pursue classical training after singing with her high school’s chamber choir in Stamford, Conn. Now, she waves aside recollections of others’ surprise at her chosen path: “typical black suburban tale.”

She met her husband, the pianist Jason Moran, during her first week studying at the Manhattan School of Music. They dated for seven years and have since been married another 10, with 5-year-old twin boys, Jonas and Malcolm. The singer has appeared on and off for the last 10 years with her husband’s postmodern trio, the Bandwagon. More recently, the couple has shared a number of musical bills, including performances of African-American spirituals with the Charles Lloyd New Quartet, and BLEED, their Biennial residency at the Whitney Museum of American Art in 2012. There, on the museum’s sunlit fourth floor, the couple kaleidoscoped through five days of cross-bred performance, blending song, dance, theater, poetry, lecture, diary, film and journalism. Says Hall Moran of their residency at the Whitney, “We didn’t want to necessarily do what makes our industry run-you know, just concerts. We don’t make industry. We make art works.”

“Alicia is much more demanding than any other musician I’ve played with,” says Moran. “Like, exponentially. She’s really trying to pull something out of me that’s very refined in terms of touch and paying attention.” Moran specifically credits his wife with introducing him to the Alexander technique. (Really more of a therapeutic process, the Alexander technique was developed in the 1890s by a Shakespearean actor to overcome voice loss, and is frequently employed to break down habitual tension during classical performance.) Moran notes his wife’s influence not only as a technician, but as an aesthete off the stage as well: “Alicia is always looking at things like, ‘How could you display this? What’s the context for this now?'”

Given the both/and ethos of her projects, Hall Moran’s allergy to category is understandable. “I’m not a jazz singer-you have write that,” she insisted. “And I’m not an opera singer. If I was, somebody would be paying me money to sing in their opera, which has never happened in my life.” At least that much will change next fall, when she’s set to star in the director Diane Paulus’ politically radical adaptation of the Gershwins’ “American folk opera,” Porgy and Bess. Hall Moran understudied Audra McDonald’s title role in the Tony-winning Broadway production last year. In Paulus’ version, Bess is presented not as a wilted addict but as an archetype of self-sacrifice boldly black and female in character-a revision well suited to the plain strength of a singer who notes in passing, “that black way of putting heaven and hell in the same mouthful.”

“For 15 years, I had day jobs. Some of those jobs…” she laughs, “they gave me a real appreciation for what people do every day.” Then, coming to, “And for what people might need from a song, if they get a chance to hear it.”

Guitarist Will Bernard bears the bittersweet blessing of virtuosic skill and eclectic taste, making his music a perpetual delight and yet hard to categorize. Maybe … END_OF_DOCUMENT_TOKEN_TO_BE_REPLACED

At 95, Chicago-based guitarist George Freeman is among the world’s oldest active jazz musicians. Although he came of musical age in the 1940s and counts … END_OF_DOCUMENT_TOKEN_TO_BE_REPLACED

When you’re on TV, everybody knows you, or at least thinks they know you. Take Kevin Eubanks, who was on NBC’s Tonight Show five nights … END_OF_DOCUMENT_TOKEN_TO_BE_REPLACED