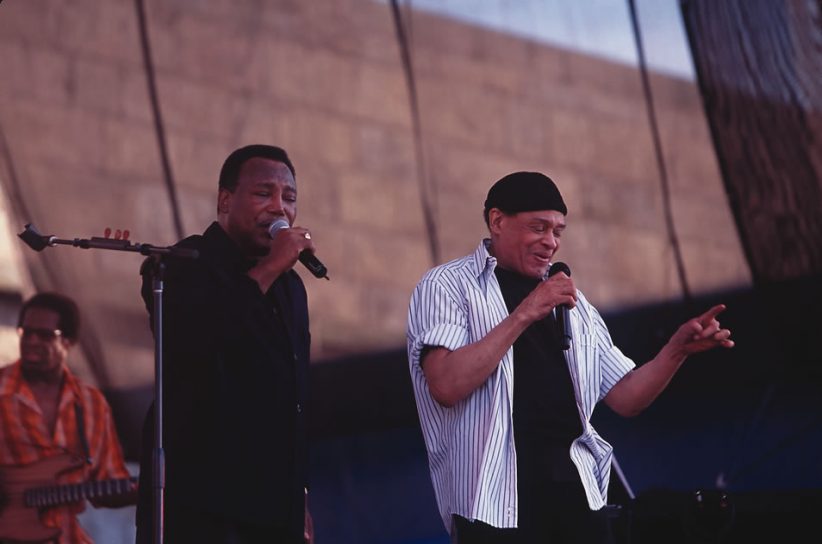 George Benson and Al Jarreau first met at a Warner Bros. Records showcase for staff in Los Angeles. The year was likely 1976, by their estimation, when the elastic-voiced Jarreau jumped from specialty division Reprise to parent Warner Bros. to record 1977’s Look to the Rainbow, while Benson-who had been recording jazz albums for more than a decade on myriad labels-finally broke big with his first Warner release, Breezin’. The label was just beginning to build its reputation as a home for contemporary jazz artists, and a show was scheduled to rally label troops from across the country. “It’s an amazing thing how fast time flies by, because that seems like not too long ago at the Ambassador Hotel,” reminisces George Benson of that first meeting with Jarreau. “It was a very sunny afternoon, we went in and had a very successful showcase and everyone came out raving about how well we did.”

Jarreau, he remembered, “was so different from what I expected. He was a pretty loose kind of guy, a let-it-all-hang-out type of person. I kind of liked that.”

British keyboardist Pat Thomas has performed alongside avant-garde luminaries for decades, but somehow has remained a relatively unknown quantity on this side of the Atlantic. … END_OF_DOCUMENT_TOKEN_TO_BE_REPLACED

Jen Shyu is slumped over a desk. As a green spotlight illuminates her long, dark hair and shoulders, a disembodied female voice imitates bird and … END_OF_DOCUMENT_TOKEN_TO_BE_REPLACED

Almost everybody has seen it: Sailor Sabol’s spectacularly out-of-tune rendition of “The Star-Spangled Banner” at the February 2021 CPAC convention. Dozens of videos are circulating … END_OF_DOCUMENT_TOKEN_TO_BE_REPLACED

In the fall of that notorious election year of 2016, six-time Grammy-winning arranger/composer Vince Mendoza was working on a commission from the Czech National Symphony … END_OF_DOCUMENT_TOKEN_TO_BE_REPLACED