Not only is Jackie McLean my musical hero, but in many ways he is my musical father. I met him as a senior in high school, and then became his student at the Hartt School of Music [at the University of Hartford]. It was transformative: He took me under his wing, gave me a vision and a direction for how I would manage my life and my music. I model myself after him, his music, and his teachings. Even now, in the bands that I put together and the songs that I choose to play, he’s such a part of me—completely entrenched in what I do.

Listen to a Spotify playlist featuring all of the tracks in this Artist’s Choice:

Except for his work with Miles Davis, this was the first Jackie McLean album—and song—that I ever heard. Listening to him play that blues, which was very melancholy, had a certain mystery that drew me in. I remember listening to it in the dark, playing along with it and just hearing him soar over those changes in a very melodic way. It was inspiring.

That’s one of the rare examples of J. Mac on tenor. Even though he played alto, he took a lot of influences from tenor saxophonists. He told me when I was studying with him that one of the saxophonists he wanted to sound more like was Tina Brooks. Knowing that, I hear echoes of Tina’s sound whenever I hear “A Long Drink of the Blues”; that’s someone he really admired. 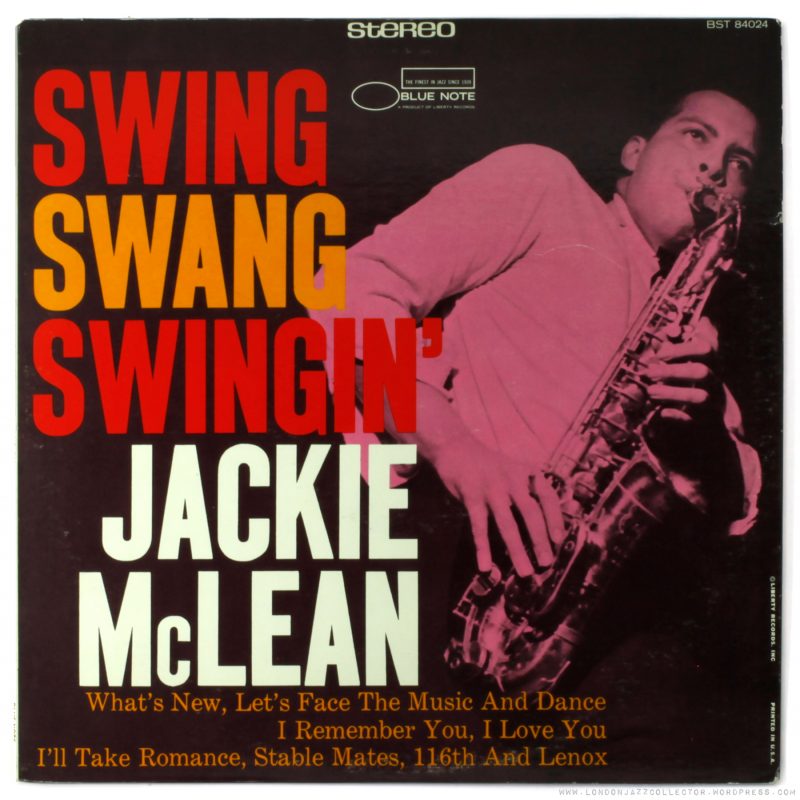 Jackie’s relationship with drummer Art Taylor was deep, and they kept it going all the way up until A.T.’s death in the ’90s. Hearing them together on this record is great. The chemistry is already strong and they’re really tight; they matured together, as we all do, but there’s a rawness that you hear between them on “I Remember You,” that’s something you have when you’re in your twenties and you’re hungry for the music.

Jackie was at the height of his struggle with drug addiction when he was working with Freddie Redd on The Connection. But man, this is some of the most beautiful playing he ever did. He maneuvers these changes in a way that no one else can, and it seems like he can go on forever. The ideas just keep spinning out of his horn. I never get tired of listening to this.

This album came right at the beginning of the avant-garde movement, which J. Mac was an important part of, and the beginning of the civil rights movement: making this amazing music during a very dark time in America. On “Melody for Melonae,” you hear Jackie going in and out of time, experimenting with form in this open-ended modal solo. I recorded this tune myself, on my album Veneration in 2006.

My Veneration band is inspired by this album, with its configuration of vibes, saxophone, bass, and drums, with no piano. (Jackie’s album also includes trombone, from Grachan Moncur III, though my band did not.) The device here is really interesting: Jackie uses two triads over one chord to make a melody. I wrote a song called “Concentric Drift” using the same device. Again, it’s J. Mac experimenting with free form. It’s also one of Tony Williams’ first recordings as a sideman, and he sounds great here.

I love this melody—there’s a whole bunch of us on the New York scene that just love to stretch out on that melody—and I love how J. Mac and Woody Shaw play it together. Woody is very young here, and again the drummer is a very young Jack DeJohnette. It reminds me that much as he loved to play, Jackie was always looking for opportunities to be a teacher and a mentor even if he wasn’t in a classroom per se.

Dexter Gordon was one of J. Mac’s most important influences, one of the people he patterned everything he did after. Getting to do this album with Dexter—and the other one they made together, The Source—meant so much to him that I just had to include it. I actually think Jackie plays better on The Source, but the melody of “Rue de la Harpe” is so beautiful and hearing them play it together is really special.

I never hear anyone speak about this album, but it might be my favorite Jackie McLean album of all time. Part of that is nostalgia: I was just starting to study with Jackie when it came out. But there’s also the fact that Jackie got better and better as his career went on, and he’d never sounded better than on “Rhythm of the Earth.” The melody was sophisticated and soulful, and Jackie’s sound was a perfect mix of tradition and the modern harmonies that people were thinking about at the time. His solo is piercing, soulful, and it has every aspect of what he was about.

You can hear on this album how much fire Jackie still had in his mid-career, and especially on “Minor March” with its super-fast tempo. He taught us that being able to play at these fast tempos was an important part of the music, and hearing him at that age, with all that intensity and speed—it’s him who’s bringing along all these younger members of the band! It’s a testament to his power, and something I aspire to no matter how old I get.

[as told to Michael J. West]

Ever since I was in the 7th grade, I have had a passion for jazz. I have always listened to and enjoyed a wide variety … END_OF_DOCUMENT_TOKEN_TO_BE_REPLACED

“My overall goal is trying to figure out how to connect the languages of jazz and classical to make an interesting and engaging performance, and … END_OF_DOCUMENT_TOKEN_TO_BE_REPLACED

We calculated our top 40 new releases of 2022 based on year-end lists by our writers. They were asked to choose the 10 best new … END_OF_DOCUMENT_TOKEN_TO_BE_REPLACED

We calculated our top 10 historical/reissue recordings of 2022 based on year-end lists by our writers. They were asked to choose the five best historical … END_OF_DOCUMENT_TOKEN_TO_BE_REPLACED