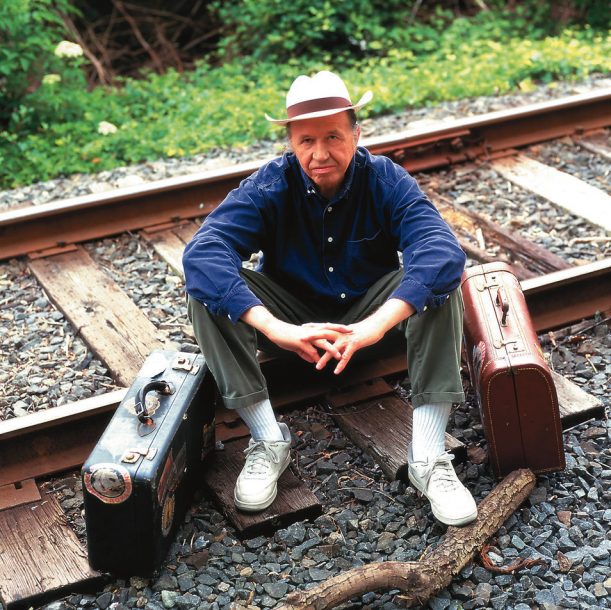 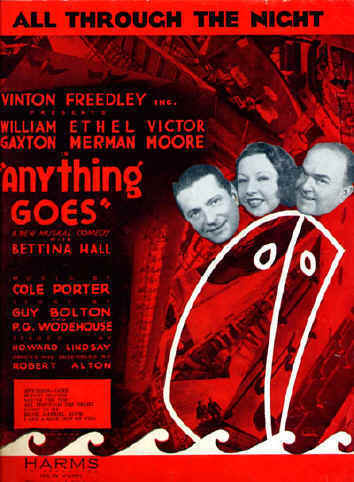 Poster from Anything Goes 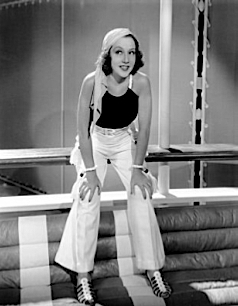 I’ll confess I’m a sucker for a good list song. Cole Porter remains the uncontested king of rhyming inventories. He was tops at cataloging just about any subject, and likely produced more list songs than any other songwriter of his era. But if Cole is king, there are many worthy wordplay princes-a list that extends from the Gershwins to Dave Frishberg-near equally adept at poetic cataloging.

How better, I figured, to celebrate list songs than to compose a list? Though there are plenty of fine contemporary list songs (Paul Simon’s “50 Ways to Leave Your Lover” and Sondheim’s “I’m Still Here” leap immediately to mind, as does Johnny Cash’s infectious “I’ve Been Everywhere”), I’ve opted to stick with more classic examples. Originally, I’d intended to present my personal top 10, but narrowing the choices became so difficult that I upped the ante to twelve.

Among the contenders that fell just shy of the top 12: Johnny Mercer’s “Friendship,” Bobby Troup’s “Route 66” and Matt Dennis’ “Let’s Get Away from It All” (both more travelogues, I figured, than list songs), “Santa Baby” (too seasonal), Rodgers and Hammerstein’s “My Favorite Things” (too sugary) and Porter’s “Come to the Supermarket” (a tad too obscure, plus I didn’t want to risk Porter overload).

So, in reverse order, here (in my humble opinion) are the deserving dozen:

The list: In the original stage version, “Zip” was sung by minor character Melba, an ambitious reporter recalling snippets from a memorable interview with stripper Gypsy Rose Lee. In the 1957 film version of Pal Joey, the plot was considerably changed (as was the location, from Chicago to San Francisco). This time around, “Zip” is performed by society dame Vera Simpson (Rita Hayworth), after it is revealed that, before she married into money, Vera was a burlesque headliner. Some of the original lyrics remain intact, but the song is contemporized with references to, among others, Marilyn Monroe and the New York Giants.

Best Lines: I don’t like a deep contralto / or a man whose voice is alto / Zip! I’m a heterosexual

Best performance: It’s a toss up between Elaine Stritch’s version in the hit 1952 Broadway revival or the rollicking rendition that Stritch included in her one-woman show a few years ago (available on the CD Elaine Stritch at Liberty, released on the DRG label in 2002).

Words and music by Bobby Troup

The List: A gastronomic tour of the United States – with fuel stops including Albuquerque for turkey, East St. Louis for chop suey and Laguna for tuna – conducted by a guy with a seemingly limitless appetite.

Best performance: Mark Winkler delivers a dynamite version on Mark Winkler Sings Bobby Troup, but the prize must go to Troup himself for his breezy reading from the 1950s (included on the Fresh Sounds CD Kicks on 66, released in 1995).

Best Lines: Duncan Hines, he ain’t got nothing on me / I’ve been known to drive alone / to Butte, Montana to get a banana split

The List: In the court of King Arthur, circa 528, the king’s evil sister Morgan Le Fay explains how she’s maintained a divorce-free record, rhyming off the various ways she has bumped off her steady succession of husbands (for infractions ranging from drunkenness to snoring).

Best performance: Anita O’Day’s 1960 version, featured on Anita O’Day and Billy May Swing Rodgers & Hart, is deliciously blasé, but even O’Day is outpaced by perennial troublemaker Pearl Bailey, who included the number in her wicked 1959 collection Pearl Bailey Sings for Adults Only.

Trivia: “To Keep My Love Alive” was the last lyric completed by Lorenz Hart before he died of pneumonia in 1943.

Recently I was at a café wrapping up a day by reading Edwardian ghost stories, bored by the music on the sound system and not … END_OF_DOCUMENT_TOKEN_TO_BE_REPLACED

“I live close to the ocean here in Los Angeles, so I’m surfing pretty much every day, and fortunately my family is close by—my folks, … END_OF_DOCUMENT_TOKEN_TO_BE_REPLACED

When I started to put this list together, first I wanted to think about the harmonica players that had an impact on my playing, on … END_OF_DOCUMENT_TOKEN_TO_BE_REPLACED

Zodiac Suite (Asch, 1945; reissued by Smithsonian Folkways, 1995) Williams’ masterpiece is both an impressionistic representation of the signs of the zodiac and a striking … END_OF_DOCUMENT_TOKEN_TO_BE_REPLACED