Skip to content
Become a member and get exclusive access to articles, live sessions and more!
Start Your Free Trial
Home > Features > The Essential Nina Simone Recordings: A JazzTimes Guide 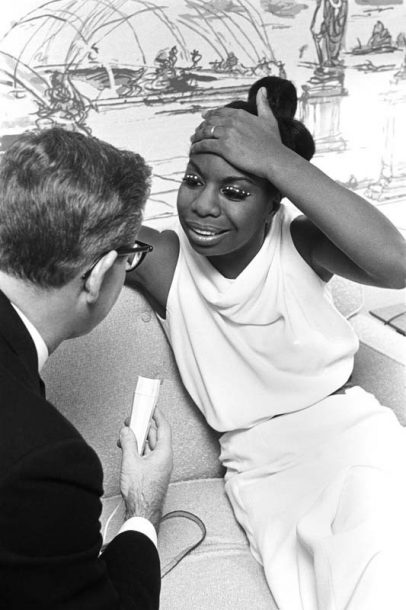 While Nina Simone’s discography spans more than 40 albums, the closest she ever came to a genuine bestseller in the U.S. was her 1958 debut LP for Bethlehem. Despite her consistent lack of sales power she recorded steadily for 35 years, often for major labels, and she stands, alongside Sinatra, as one of few artists of her era whose catalog remains near-entirely in print. Not one to be pigeonholed, Simone bounced freely between jazz, pop, blues, folk and gospel, often with classical undertones that harkened back to her earliest career ambitions. So powerful yet amorphous a body of work is difficult to dissect, but here, in rank order, are nine must-hear Simone albums plus a heterogeneous endnote.

Focusing on lean, lithe blues, Simone savors every moment, in perfect sync with guitarists Rudy Stevenson and Eric Gale, channeling the sass and interpretive heft of Bessie Smith. Awash in heartache and longing-offset by the sensuous “In the Dark,” flirtatious “Day and Night” and lusty “Buck”- Sings the Blues is exquisitely crafted, reaching its apex as Simone indulges the carnal cravings of “I Want a Little Sugar in My Bowl.” Though at the height of her civil rights fervor, she nods to the cause just once, teaming with Langston Hughes to shape the emboldened “Backlash Blues.”

By 1964 Simone’s activist zeal was fully ignited and she was ready to growl. Recording across three nights at Carnegie Hall, she left SRO crowds suitably roused with her “Pirate Jenny,” the Weill-Brecht show tune brilliantly transformed into a chilling portrait of black oppression; her cunning upending of “separate but equal” laws with “Old Jim Crow”; and the nursery-rhyme lilt of “Go Limp,” her winking yarn of sexual hijinks amid protest marches. Then came the thunderously climactic “Mississippi Goddam,” Simone driving home her fist-shaking condemnation with an emphatic “and I mean every word.”

3. Fodder on My Wings

Though Simone never shied away from expressing her innermost thoughts and beliefs, this Parisian session serves up a singularly vibrant self-portrait, beginning in high style with the exuberant “I Sing Just to Know That I’m Alive.” She celebrates her satisfying years in Africa (“Liberian Calypso”) and reflects on her dismal time in Switzerland (“Le Peuple en Suisse”). Her father’s death is poignantly recalled in her reworking of Gilbert O’Sullivan’s “Alone Again (Naturally).” And her unyielding campaign for civil rights is artfully explored in the yin-yang of the dark, vengeful “I Was Just a Stupid Dog to Them” and playful, joyous “Color Is a Beautiful Thing.”

In 1987 Chanel used Simone’s breezy “My Baby Just Cares for Me” in a U.K. perfume ad, significantly boosting her then-lagging popularity. It remains the best-known, if misrepresentative, track of her entire career. Most of the 10 other cuts from this impressive debut are better illustrations of the remarkable interpretive finesse she’d developed by age 24. Simone’s cleverly bracing “Mood Indigo,” achingly tender “I Loves You, Porgy” (her one and only chart hit) and inspired melding of the delicate Rodgers-and-Hart title tune with “Good King Wenceslas” are particular standouts.

5. At the Village Gate

At the time of this 1961 date, recorded at what she affectionately called her “home club,” Simone was an artist in transition. She was incorporating fewer standards into her playlist, her penchant for folk music was rapidly widening, her love of gospel had been rekindled and her civil rights activism was beginning to bud. It’s all evident across this brief but seminal session that blends “Just in Time” and “He Was Too Good to Me” with Oscar Brown Jr.’s gently wishful “Brown Baby,” the intoxicating chain-gang chant “Zungo” and a glorious, rafter-rattling “Children Go Where I Send You.” Another highlight is a hushed take on the folk song “House of the Rising Sun,” three years before the Animals had a hit with it.

Though Simone loudly denigrated her sole album for producer Creed Taylor, Baltimore is a remarkable olio and one of her finest LPs. Arranger Dave Matthews, working with such top-drawer musicians as guitarist Eric Gale and bassist Gary King, serves her well throughout the bruised majesty of “Everything Must Change,” the funky grit of Randy Newman’s title track and the muscular sass of Hall & Oates’ “Rich Girl.” Her reflective take on Judy Collins’ “My Father” is stunningly heartrending. She brings it all home with a reggae-infused “Balm in Gilead” and come-to-Jesus “If You Pray Right.”

Three days after the Rev. Dr. King’s assassination, Simone, still in extreme grief, headlined the Westbury Music Fair, about 18 miles east of Manhattan. Dedicating the evening to King, her deeply moving tribute extended from “Sunday in Savannah” to the closing “Take My Hand, Precious Lord,” with the 12-minute elegy “Why? (The King of Love Is Dead)” as its dramatic centerpiece. RCA, concerned about Simone’s emotionally charged mid-song commentary, replaced the “Why?” performance with a tamer studio version. Fortunately, the magnificent original has been reinstated on CD reissues. Another studio addition, Hair‘s zestful “Ain’t Got No/I Got Life,” would become a cornerstone of her songbook.

The voice is faded, the vibrato tattered, her raw power extinguished. Yet, echoing Shirley Horn’s twilight resurrection, these 10 lushly orchestrated tracks evince an elegantly timeworn wisdom. Modeled after Sinatra’s A Man Alone, what would prove Simone’s final studio album tells of love and loss, including the jaunty impishness of her own “Marry Me” and the wistful gratification of Rod McKuen’s “Love’s Been Good to Me.” But it’s the title track, also McKuen’s, which provides her an ideal epithet. “Always alone, at home or in a crowd,” she sings, “a single woman in a world few people understand.”

The most curious album in the Simone catalog also ranks among her most compelling. Intended as commentary on America’s dismal state, it comprises just four tracks, purportedly recorded “in concert.” In fact, only the opener, an 18-minute, chorus-backed commingling of George Harrison’s “My Sweet Lord” with the anguished “Today Is a Killer” (Simone’s music paired with words from the Last Poets cofounder David Nelson) was captured live, for an audience of young soldiers at Fort Dix. Subsequently shaped in the studio are an affecting marathon treatment of Harrison’s “Isn’t It a Pity” and the anti-drug “Poppies.”

Too many landmark tracks are scattered across other Simone albums. In the age of iTunes, a customized playlist of such gems represents as vital an “album” as any included above. For starters: her mesmeric rendering of “For All We Know,” from Bethlehem’s multi-artist Nina Simone and Her Friends; the wickedly enchanting title track and “Feeling Good,” from I Put a Spell on You; Wild Is the Wind‘s seismic “Four Women” and its gloriously turbulent title track; her transcendent “I Wish I Knew How It Would Feel to Be Free,” on Silk & Soul; Pastel Blues’ blistering “Sinnerman”; and Black Gold‘s anthemic “To Be Young, Gifted and Black.”

Ever since I was in the 7th grade, I have had a passion for jazz. I have always listened to and enjoyed a wide variety … END_OF_DOCUMENT_TOKEN_TO_BE_REPLACED

“My overall goal is trying to figure out how to connect the languages of jazz and classical to make an interesting and engaging performance, and … END_OF_DOCUMENT_TOKEN_TO_BE_REPLACED

We calculated our top 40 new releases of 2022 based on year-end lists by our writers. They were asked to choose the 10 best new … END_OF_DOCUMENT_TOKEN_TO_BE_REPLACED

We calculated our top 10 historical/reissue recordings of 2022 based on year-end lists by our writers. They were asked to choose the five best historical … END_OF_DOCUMENT_TOKEN_TO_BE_REPLACED