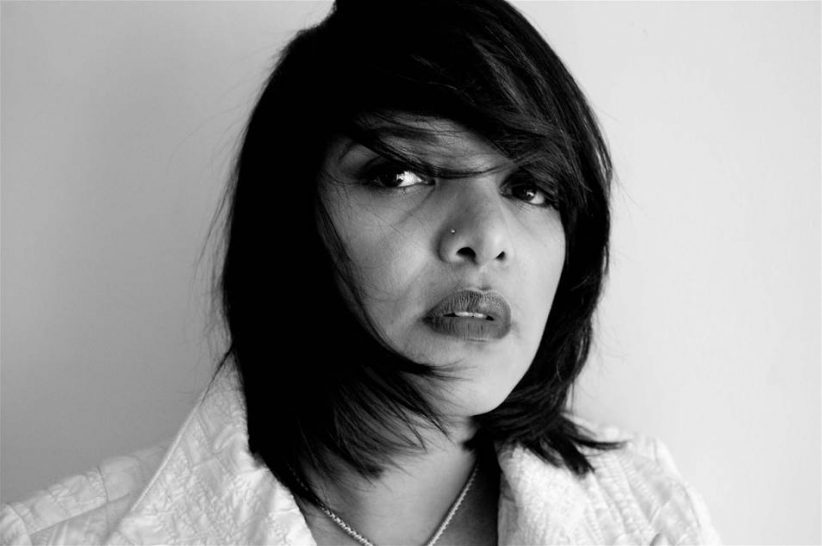 Drummer, composer and producer Terri Lyne Carrington established her reputation as a pre-teen prodigy, jamming with giants and receiving a scholarship to the Berklee College of Music at age 11. She has since collaborated on the road and in studios with Herbie Hancock, Al Jarreau, Wayne Shorter, Clark Terry and many other luminaries, and she received mainstream attention on television as the house drummer on the Arsenio Hall Show and the short-lived late-night talk show Vibe. In addition to her various projects and production credits, Carrington is the artistic director of the Beantown Jazz Festival in Boston and a professor at Berklee. Her latest recording is More to Say (Real Life Story: Next Gen) on Koch. She joined JT for this interview in May, just three days after legendary pianist Hank Jones had passed.

BEFORE: That’s beautiful. If it wasn’t Elvin Jones it’s somebody who’s listened to a lot of Elvin. His vocabulary and soloing with the left hand is so loose. Elvin approached the drums with urgency and a raw sensibility. Because I produce and I’m into the sound of things, it didn’t sound like the old Elvin Jones. On this recording, the snare was a lot louder the way it was mic’d. It’s not warm like those classic recordings from the ’60s, so it was throwing me off a little. Certain microphones pick up more of the detail of the snare, so if you have a busy left hand, which sounds great live, and if you have a certain kind of mic on it, you’ll hear certain details which can be distracting. So that’s what I was hearing, and I’m not used to hearing that sound from Elvin. I noticed the hi-hat was right on the 2 and the 4, which is uncharacteristic of Elvin, but his left hand was pulling back to produce a kind of tension. I enjoyed that. I tend to listen analytically, which can be a curse if you just want to sit back and enjoy. So if I just want to feel it, I like to listen to a good singer or some hip-hop, where I don’t have to analyze. The swing was cool. The pianist was nice, traditional. I could really feel the love of that idiom, and when I listen to that style, that’s what I like to listen for.

AFTER: It’s funny, I was thinking it might be that trio. I love Hank Jones, the ease of how he plays; it’s steeped in the tradition. Hank and Tommy Flanagan both seemed timeless. You can almost play anything, and if the feeling and the sound are right it always sounds good.

BEFORE: Uh oh. “Gone,” from Porgy and Bess. I love it. Woo! I never heard this. That’s cool. Wow, that’s way cool. They don’t like Herbie at all [laughs]. That’s bad. I love it. That was so enjoyable. The cowbell and the groove are go-go all the way. I love that go-go beat. It’s an amazing production arrangement. The clavinet was killing me. After playing with Herbie as long as I have-he plays great clavinet, so funky and soulful-if I was producing a track like that my first instinct would be to put a guitar on there to add that funk. But that clavinet was so in the pocket, so perfect, that it served the same purpose. I love the choice of clavinet there. People aren’t using it much today. Drumming was great. I have no idea who it was, but it was perfect.

I love where music is right now. I like the mixture of styles. I was talking with Billy Taylor yesterday, and he said one of the things he thought screwed up jazz was when radio separated jazz from R&B. I feel that way, too, and I feel it’s returning to that in a different way. A lot of the younger musicians are not being boxed in.

AFTER: I was gonna say Stefon. Marc Cary? Killin’ arrangement. Who’s playing drums? I really enjoyed that. I’m gonna get it.

BEFORE: [listens straight through with periodic laughter] This is great. It’s so nice to hear the drums improvising throughout the whole piece. The language in the drumming is so Jack D. I recognized things that I play, and it made me think immediately how influenced I am by him. There’s a connection you have with certain artists and the way you play, like soul-to-soul. What you think is hip, they think is hip-you know what I mean? So it’s his fluidity on the drum set that he brought to the table. He has such an original voice. And nobody can imitate his touch on the ride. There are certain things that I learned from him: dynamics within a phrase, like going over bar lines, or starting in an odd place but being so fluid that it doesn’t matter because you’re not locked into a feeling of where 1 should be. It’s like water, like the ocean, like waves, like breath. It’s a constant sound, but it never becomes boring to your ear because it has constant motion in it. A lot of people have obvious dynamics, playing loud then soft. But I’m talking about moving dynamics constantly within your phrases.

You laughed while you were listening. What was so funny?

Little things that he played that I know influenced me; just the timing of it, the looseness of it. But precise looseness-that’s a very hard thing to do.

AFTER: That was Danilo? Wow! That intro was great. It made your eyes cross a little, but in a good way. Cool. I’m going to see Jack in a couple of days and I’ll ask him to play this recording for me. He’s my guy. That’s why I was laughing, because I forget sometimes how much he influenced me. It’s nice to be reminded.

BEFORE: It sounds so familiar. The drummer relaxed me; the sound of that 6/8 thing, and then the time came in and it was amazing how relaxed it was. I wish I could play like that.

How do you relax at uptempo?

It depends who you’re playing with. I tell my students to think in half-time. The old cats tap their foot on 1 and 3, and I totally get that because that’s where the time is. But when you’re playing fast and when you think in half-time, you automatically relax and it’s not as frantic. And that adds a little funkiness to it. This ride was very broken and relaxed. Roy Haynes is one of my favorites for breaking up the time; he’ll break up the hi-hat and other things more. Here, the hi-hat was still keeping the time on 2 and 4, but it was so solid and relaxed and the ride [cymbal] was painting. It just seemed like a seasoned professional who’s seen it all. And the clarity of the ideas in the solo is how I want to play one day.

I’m not trying to be funny, but there’s a quality to an older man and the way they play the drums that I want to have. You know what I mean? [laughs] It’s like, here it is: You all do what you’re doing, but here it is. There’s wisdom and a peace about that. That was beautiful.

AFTER: Really? He’s on so many great records. Most of us drummers could listen to that and really learn something.

5. Art Blakey and the Afro-Drum Ensemble

BEFORE: I feel like my father will say, “You don’t know who this is?” That’s very, very cool. The African thing was cool, and then I heard all those Art Blakey-style bombs. But I don’t know that I’ve ever heard him play the hi-hat on 1 and 3, so that was interesting. It’s almost a mambo kind of thing that Blakey would do. Nobody could really hit a 1 like Art Blakey, but the hi-hat is really throwing me. It’s back to the tribal thing we were talking about earlier.

AFTER: Yusef sounded great. I love the sound of it. That’s very hip. I gotta get that record.

BEFORE: That was great. I have no idea who was playing that tuned drum. The first thing I noticed is that the drummer was doing some double-timed phrases on top of the ostinato, but then it jelled back together. It sounded a little like Clark Terry, and then he played some things in the upper register that sounded like Dizzy.

AFTER: Really? That was Ed? Damn! That blows me away. I loved Ed, his brushwork, and the stuff he did with Oscar Peterson was swinging so hard. I loved him as a man; he was such a gentleman. I used to go to his house in Denmark for dinner. I’ve got to go back and listen to this record. Holy macaroni.

In line with many resourceful jazz practitioners, Gilad Hekselman responded to the enforced isolation of the COVID-19 pandemic with a turning-lemons-to-lemonade attitude that ultimately eventuated … END_OF_DOCUMENT_TOKEN_TO_BE_REPLACED

It was the 1950s. Bebop had established itself as the new paradigm of jazz, but its newest popular variant, “cool jazz” or “West Coast jazz,” … END_OF_DOCUMENT_TOKEN_TO_BE_REPLACED

Session players have always been my thing. Not to take away from the singers or bandleaders or what have you, but I’m more interested in … END_OF_DOCUMENT_TOKEN_TO_BE_REPLACED

Walter Smith III has been burning the candle at both ends. As he connected with JazzTimes via Zoom from a New York City hotel room … END_OF_DOCUMENT_TOKEN_TO_BE_REPLACED