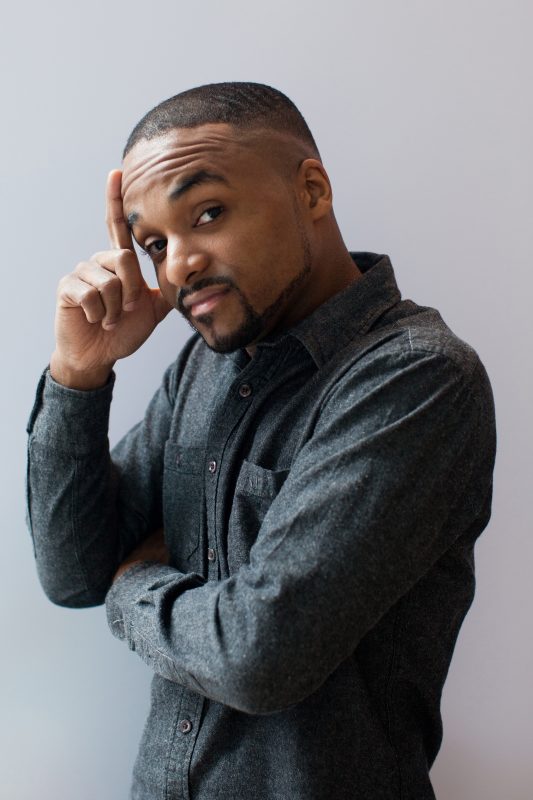 BEFORE: [Laughs] That’s the kind of stuff that gives him away. Just pull [the cover] up so everybody can see. One of my favorites, if he’s not my favorite. [Listens] I think he is my favorite. Definitely in my top three.

You know, I didn’t like jazz in high school. I hated it. I thought that it was too dissonant. Too much soloing. Too long. As a matter of fact, me and Cécile argue about it. I really hate jazz and I hate jazz musicians [laughs].

Erroll Garner is one of the exceptions. Only the masters were able to do it. Sonny Rollins. Louis Armstrong. And Erroll. Even if you hate jazz, you have to love him. I think that’s what drew me to Erroll Garner, because he made me think, “If I hate this music, why do I love this? Wait, that’s jazz. What?” So it really made me want to dig deeper and figure out what the hell this all was.

He was one of the most naturally gifted pianists to walk the planet. His playing had so much joy in it. I go to jazz shows and leave sometimes just depressed. I’m dying over here, half asleep. I’m playing this music and I’m supposed to love it, man, but I walk away from shows feeling like, “Damn, something is wrong with me.” I’m probably going to get shot for saying that too. But you cannot fall asleep listening to Erroll Garner because you never know what he’s going to do. There’s always an element of surprise there, always love and joy and happiness in every single freakin’ note he plays. Him and Art Tatum.

Geri Allen was, and now Christian Sands is, keeping his flame burning. But Erroll and some of the piano masters from the ’50s and ’60s who used to be so popular, like Oscar and George Shearing, aren’t discussed as much anymore.

Isn’t that weird? All the happy piano players getting lost in the wash.

BEFORE: Sounds like Brad. There’s a certain way he articulates notes—that’s a Brad-ism, along with different rhythms that he goes to with the left hand. Almost like a staggering, creepy-crawly kind of thing. Oh, “Still Crazy,” Paul Simon. I do feel the whole point of the music was to take songs that were popular in the time and turn it into jazz. You think of the American songbooks, those are the pop tunes of the time. The American songbook didn’t die when Richard Rodgers or Jerome Kern died. Stevie Wonder, Joni Mitchell, Paul Simon—they’re pop musicians still writing great music. At the end of the day it’s just music, and how you interpret it with the language you know. Gospel music is like that. It was formed in church but you hear it outside of worship too. Or the other way around: As early as Bach, they would take secular pieces, change the words and make it religious. A good song is a good song.

BEFORE: This reminds me of Ellis. [Listens] The way he ended that [chorus]—that’s Ellis. [Drum solo begins] Well … no, no, no, no, no. That’s Jimmy Cobb. I thought it was Ellis because the way the eighth notes felt reminded me of him. Then it was throwing me for a loop because that really sounds like Jimmy Cobb on the drums, so it cannot be Ellis. I don’t know if Ellis recorded with Jimmy. Did he?

AFTER: I didn’t know that they recorded together. I know [Ellis’] eighth note so well. His feel is very relaxed. It reminds me of New Orleans music, just the way they swing down there. It doesn’t really get much faster than that. That’s considered an uptempo tune in New Orleans! [Laughs] I definitely spent more time studying the straight-ahead sound [like Marsalis] more than the traditional New Orleans sound, like Fess and Allen. I’m more familiar with this style of playing than the other one, to be honest.

How can I put it? Ellis was definitely a staple, but I only had one or two lessons with him. I wasn’t a student-student of his. I went to his house once, and his wife Dolores—Wynton’s mom—opened the door, and she was like [brusquely], “What you want?” I say, “I’m here to study with …”—and I’m stuttering—“… with Mr. Marsalis.” “Well, go up there!” Uhh, okay. So I walk in and say, “How are you doing, Mr. Marsalis?” He was the same way. “Uh-huh, so what you want?” “I’m here to take a lesson with you.” “Okay, you bothered me after the gig. You got my email. You emailed me. You called me. You here. So play something!”

This was my third time being with him one-on-one. The first two times I hung with him, he made me cry. So this is my first real lesson with him. I made a mistake and played “Lush Life” for him. Midway through the verse, he walks up to this cabinet, gets the sheet music for it and throws it at me, BAM! I catch it and he says, “Read that!” I’m reading it slow and he’s like, “Uh-huh, see? You didn’t know that’s how it’s supposed to go. Lesson number one—don’t ever play a song unless you know it, and you know the lyrics too.”

He was harsh but he was honest, and I felt like somewhere deep inside he cared for you. He treated you like he was your grandfather, and it was all about music. If he didn’t like something, he would let you know. He had these sayings: “Hey man, clowns belong in the circus.” Or “Corn feeds the world,” just to say that your playing is corny. We need more educators like that, who ain’t going to sugarcoat it for you. You know it’s coming from a sincere place of love. It was a huge, huge blow to lose him this year. Huge blow.

Of course, Jimmy. It was so special to play with him, almost magical. I did that twice at the Vanguard, and a few times with Roy Hargrove and Roberta Gambarini. There’s some people you play with and it’s almost uncomfortable how easy it feels, you know what I mean? [Laughs] You don’t have to work at all. You know how bass players are always complaining about how they’re in pain, how their back hurts, how their hands have blisters, and all this stuff? I noticed every time they played with Jimmy, they walked off smiling. He was just one of those drummers that made everything easy and clear.

BEFORE: Is this that duo album that everybody is telling me about? Ran Blake and the singer? There have been a few people that have said that The Window, the duo album I recorded with Cécile, reminds them of this album. I haven’t checked it out entirely. I have two albums of Ran Blake but I’m not that familiar with this one. He’s definitely coming out of late 19th-, early 20th-century classical composers, and in how he accompanies too.

AFTER: I’m going to check it out—Jeanne Lee. You know, when I work with Cécile it’s completely improvised on my part, to be honest. There’s some tunes that we’ve jacked the arrangements from her quartet and I just condensed it to the piano, but for the most part she leaves everything up to me and just sings on top of it. We’ve never had a rehearsal. The most would be like, “Let’s play this, do you know it?” “No.” “Go listen to it.” Then I’ll come back in five minutes, and she’ll be like, “Wait, you weren’t supposed to learn it that quick, so now I got to learn it!” So she goes and listens to it, and we’ll just try it out in front of people.

Even if it’s Shania Twain?

[Laughs] Yeah, for sure. Or Sting, or Stevie Wonder, or Aretha Franklin, or whatever. It’s already arranged, or I make it up and she sings on top of it. Some of her favorite singers are musical theater people and she’s really into words and lyrics with a weird twist in the end. She loves irony, she loves plays on words. When she brought me “Pirate Jenny” [from Kurt Weill and Bertolt Brecht’s The Threepenny Opera] I was like, “I’m not playing that song. What am I supposed to do with this?” She says, “Oh, just play it, the lyrics are great!” And it turns out to be the song everybody wants to hear.

The moral of the story is, trust the singer.

I guess. So far she hasn’t led me wrong.

Eddie Harris [saxophonist/keyboardist/vocalist, 1934-1996] means everything to me. I feel like if Eddie Harris wasn’t there, my life quality would have been completely different. He … END_OF_DOCUMENT_TOKEN_TO_BE_REPLACED

To use an age-old (but appropriate) simile, choosing the top 10 recorded examples of jazz drumming is like trying to pick your favorite child. Each … END_OF_DOCUMENT_TOKEN_TO_BE_REPLACED

This year marks the 50th anniversary of JazzTimes—and you can help us celebrate. We’re compiling a feature for our upcoming 50th-anniversary issue on the top … END_OF_DOCUMENT_TOKEN_TO_BE_REPLACED

As a supplement to our July/August 2020 feature on the pedal steel in jazz, check out these seven twangy collections that are worth your time. … END_OF_DOCUMENT_TOKEN_TO_BE_REPLACED