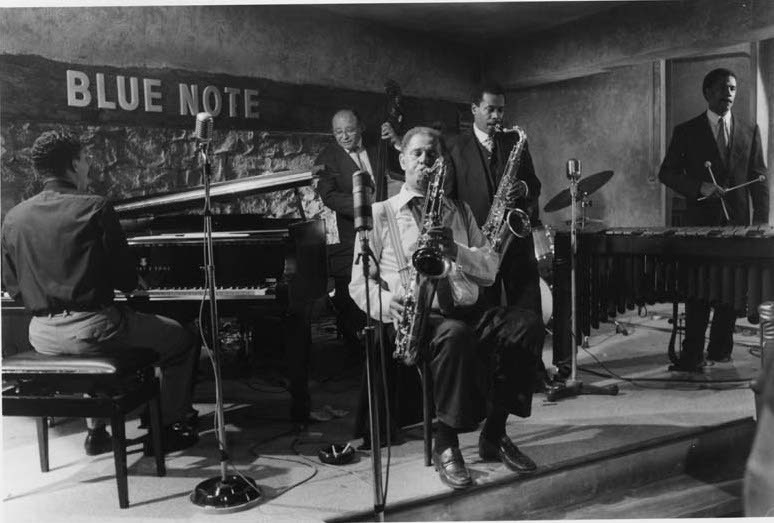 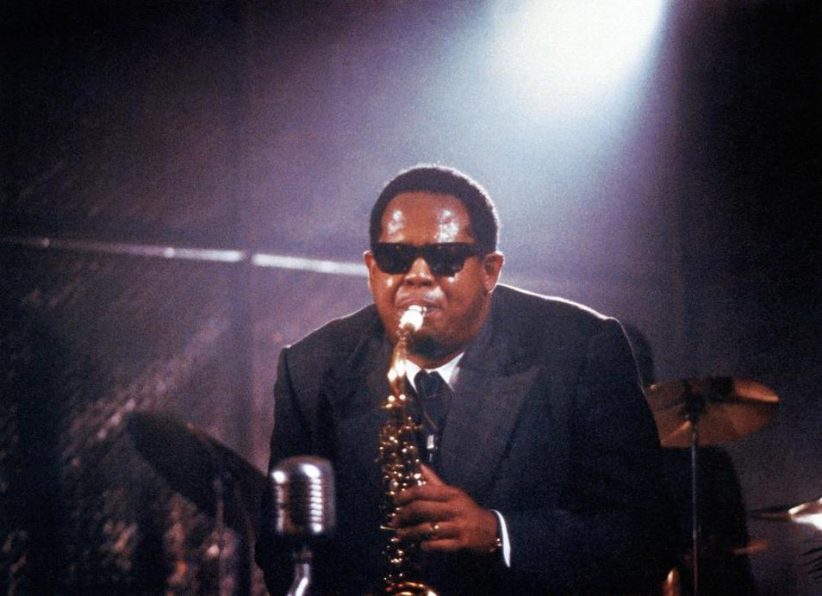 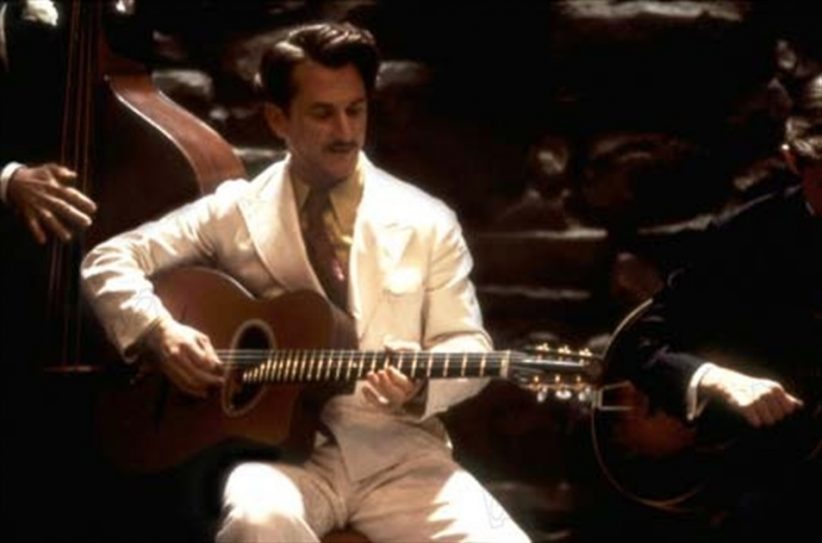 Sean Penn in "Sweet and Lowdown"

Blues in the Night (1941)
The Simpsons creator Matt Groening has called Blues in the Night “the most delirious Hollywood movie I’ve ever seen,” and with its bebop-frenzy pace and Don Siegel’s hallucinatory montages it’s hard to argue. What starts out as a good-natured musical comedy about a quintet of palookas trying to make it in the jazz biz suddenly shifts into a feverish noir with gangsters, alcoholism and obsessive desire. The Arlen/Mercer title song was nominated for an Oscar, becoming a jazz (and Looney Tunes) standard.

Arriving in the midst of a slew of jazz biopics, this tale of the rise and fall of a driven cornetist was loosely based on the life of Bix Beiderbecke. Kirk Douglas gives a typically teeth-clenched performance as Rick Martin, as he goes from wide-eyed idealist to washed-up alcoholic. Actual contemporary biopics (The Glenn Miller and Benny Goodman Stories, St. Louis Blues, The Fabulous Dorseys) were no less fictionalized, and this film has the advantage of a more stylish Hollywood elegance courtesy of Casablanca helmer Michael Curtiz.

Decades before directing the great doc Ornette: Made in America, Shirley Clarke adapted Jack Gelber’s play about heroin-addicted jazz musicians killing time in a crash pad waiting for their fix. Shot as pseudo-documentary, the film features captivating performances by a cast featuring Freddie Redd and Jackie McLean, who break out into several Redd-composed tunes.

Paul Newman and Sidney Poitier are a pair of musicians playing a cellar club in Paris in this intriguing but sometimes didactic film by frequent Newman collaborator Martin Ritt. The two men strike up relationships with a pair of American tourists (Joanne Woodward and Diahann Carroll), forcing them to explore the reasons behind their expat status. Newman strives to compose “serious” music, while Carroll aims to convince Poitier to return and take part in the civil-rights struggle instead of running from it.

Bertrand Tavernier’s film features a powerful performance by Dexter Gordon, in a lead role inspired by the lives of both Lester Young and Bud Powell. The supporting cast includes Herbie Hancock (who also wrote the score), Wayne Shorter, Bobby Hutcherson and John McLaughlin, and is probably the most accurate-and certainly the most compelling-portrait of the life and struggles of a jazz musician captured onscreen.

Like many a modern biopic, Clint Eastwood’s portrait of Charlie Parker leans more on the tragic details of its subject’s personal life than the brilliant achievements of his artistic one. That’s not to take away from Forest Whitaker’s career-making performance, which ably captures the legendary saxophonist’s pain and ambition. Bird was a labor of love for the director, a lifelong jazz fan, and that passion shines through in the respect and gravity he lends to even the most lurid moments.

A hard-luck jazz tale for the Young Lions generation, Spike Lee’s colorful film stars Denzel Washington as a self-absorbed bandleader who manages to alienate everyone in his life, including a standout saxophonist played by Wesley Snipes. The son of bassist Bill Lee, the director captures the nuances of the milieu even as the melodrama becomes overheated. The prime-era Branford Marsalis Quartet, with Terence Blanchard playing Washington’s horn lines, provides the music.

If ever a filmmaker was born to put the spirit of jazz onscreen, it was Robert Altman. The maverick director was an inveterate improviser who embraced spontaneity to a rare degree. Like his masterpiece, Nashville, Kansas City weaves musical performances into the fabric of the narrative, a gangster story set against the backdrop of the 1930s nightclub scene. Steven Bernstein led an all-star band featuring Joshua Redman, Geri Allen, James Carter, David Murray and others standing in for their legendary forebears.

Another actor-director known for his adoration of jazz, Woody Allen inserted a Django-worshipping guitarist into a loose remake of Fellini’s La Strada. Sean Penn turns in an oddball performance as the self-loathing egotist who misses gigs to drink and shoot rats at a garbage dump. Howard Alden supplies the actual fretwork, while Nat Hentoff is among the talking heads who provide documentary-like insight into the fictional jazzman.

Nominated for Best Picture at the 87th Academy Awards, Damien Chazelle’s second feature is essentially a sports movie masquerading as a jazz movie. Miles Teller plays a drum student at a prestigious conservatory whose self-destructive instincts are fueled by a tyrannical band director. The film is overwrought to the point of absurdity, but is briskly edited and features an enjoyably nasty performance by J.K. Simmons, who won an Oscar for his efforts.

In line with many resourceful jazz practitioners, Gilad Hekselman responded to the enforced isolation of the COVID-19 pandemic with a turning-lemons-to-lemonade attitude that ultimately eventuated … END_OF_DOCUMENT_TOKEN_TO_BE_REPLACED

It was the 1950s. Bebop had established itself as the new paradigm of jazz, but its newest popular variant, “cool jazz” or “West Coast jazz,” … END_OF_DOCUMENT_TOKEN_TO_BE_REPLACED

Session players have always been my thing. Not to take away from the singers or bandleaders or what have you, but I’m more interested in … END_OF_DOCUMENT_TOKEN_TO_BE_REPLACED

Walter Smith III has been burning the candle at both ends. As he connected with JazzTimes via Zoom from a New York City hotel room … END_OF_DOCUMENT_TOKEN_TO_BE_REPLACED