Skip to content
Become a member and get exclusive access to articles, live sessions and more!
Start Your Free Trial
Home > Features > Must-Hear Recordings Made at Slugs’ Saloon 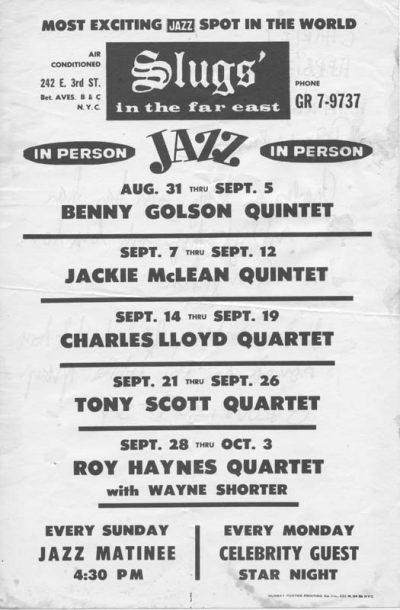 A handbill from Slugs', courtesy of Charles Lloyd

Sax and flute player Lloyd was 27 and on the rise in 1965, when he produced the bristling, experimental postbop on this double-CD/LP due out Sept. 9. One disc was recorded at Slugs’, the other at Judson Hall in the West Village. Lloyd and his band-guitarist Gábor Szabó, bassist Ron Carter and drummer Pete La Roca-venture freely into avant-garde and Eastern modal territory. (In April, as part of Record Store Day, Resonance released a limited-edition vinyl record containing two cuts from the set.)

Recorded in 1972 during the last months of Slugs’, this six-CD set features the full Arkestra, complete with drummer Clifford Jarvis, an all-girl quartet of “Space Ethnic Voices,” and reed player Marshall Allen, who took over the Arkestra after Ra’s final ascent into outer space.

In 1970, after five years of curtailed activity and personal chaos, Mingus entered his last turbulent decade with some appearances at the club, where he led an ace band: trumpeter Bill Hardman, saxophonists Charles McPherson and Jimmy Vass, and drummer Dannie Richmond.

Trumpeter Tolliver’s frenzied, staccato lines and distinctively wide vibrato made him a standout in Jackie McLean’s mid-’60s band. Tolliver was an emerging bandleader in 1970, when his Music Inc. quartet (with pianist Stanley Cowell, bassist Cecil McBee and drummer Jimmy Hopps) played Slugs’. An onsite recording comprises much of this three-CD set.

The avant-garde saxophonist’s squally, honking delirium made strange bedfellows with the marching-band jubilance of his compositions and group. This double-CD was recorded in 1966. He appeared at Slugs’ again just a few months before his death in 1970.

In line with many resourceful jazz practitioners, Gilad Hekselman responded to the enforced isolation of the COVID-19 pandemic with a turning-lemons-to-lemonade attitude that ultimately eventuated … END_OF_DOCUMENT_TOKEN_TO_BE_REPLACED

It was the 1950s. Bebop had established itself as the new paradigm of jazz, but its newest popular variant, “cool jazz” or “West Coast jazz,” … END_OF_DOCUMENT_TOKEN_TO_BE_REPLACED

Session players have always been my thing. Not to take away from the singers or bandleaders or what have you, but I’m more interested in … END_OF_DOCUMENT_TOKEN_TO_BE_REPLACED

Walter Smith III has been burning the candle at both ends. As he connected with JazzTimes via Zoom from a New York City hotel room … END_OF_DOCUMENT_TOKEN_TO_BE_REPLACED