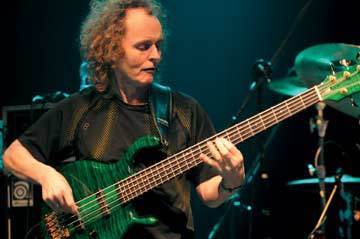 An in-demand session player, valued sideman, prolific composer and respected leader in his own right over the past 30 years, Mark Egan’s distinctive fretless bass sound has graced countless jazz and pop albums as well as award-winning movie and television soundtracks. A member of the Pat Metheny Group from 1977 to 1981, Egan has played on multi-platinum-selling recordings by Sting, Arcadia and Joan Osborne. He’s also recorded with a wide variety of artists, from pop figures like Roger Daltrey, Marianne Faithfull, Judy Collins and Art Garfunkel to jazz notables such as David Sanborn, John McLaughlin, Jim Hall and Mark Murphy. A member of the Gil Evans Orchestra for 13 years, Egan has also racked up seven albums as a leader and 10 as a co-leader of Elements, the band he formed in 1982 with his Pat Metheny Group bandmate, drummer Danny Gottlieb. His latest release on his own Wavetone label is Truth Be Told, which reunites him with longtime colleagues Mitch Forman on keyboards and Bill Evans on saxophones. “Mitch is one of the first people I met when I came to New York in 1976,” says Egan. “He later played on my solo debut, Mosaic, in ’85. And Bill and I have a longstanding history that goes back to the first Elements record.”

This powerhouse quartet project is fueled by drummer extraordinaire Vinnie Colaiuta, who brings his considerable chops to bear on funk-fusion offerings like “Gargoyle,” “Café Risque,” the uptempo burner “Rhyme or Reason,” the hard-hitting, Mahavishnu-flavored “Pepe” and the slamming title track. It’s Egan’s impressive follow-up to 2006’s As We Speak, his intimate and highly interactive double-CD trio outing with drummer Gottlieb and jazz-guitar great John Abercrombie.

BEFORE: Is that Zakir Hussain? [After the bass solo] The first thing that comes to mind is Jonas Hellborg. I know he was playing a lot of Indian-influenced music, but I’m not sure if it’s him or not. I love South Indian music. I’m not that knowledgeable about it but I listen to it all the time. I’m a big fan of Shakti with John McLaughlin. And this definitely sounds like it’s coming from that place.

AFTER: I love what Jonas does. Ever since I heard him with the new Mahavishnu Orchestra with John McLaughlin, Danny Gottlieb, Bill Evans and Mitch Forman I’ve dug his playing. In fact, Danny played me some of his music before I heard him with Mahavishnu. It was a solo bass album that Jonas had put out in Sweden. He was really into slap bass at the time, but I really dug his fretless playing, too. This track you played sounded great. He’s playing really musically with this, and as opposed to playing in a Western way he really has assimilated the Eastern or Indian sound and method. And the fretless acoustic bass guitar fits great with this concept. It sounds like a bass vina or something. It’s a direction that I’d actually like to go in. On my new album, the closing track, “After Thought,” has a South Indian influence. We use some tamboura samples on that and I’m playing the fretless, which works well with the whole vocal quality of Indian music … the infinite space between notes that is easier to get to with a fretless instrument. I’m really fascinated by South Indian music. I did some playing with Trilok Gurtu, who also comes from that tradition. I feel really close to all this music.

BEFORE: That’s Danny Gottlieb and Jeff Berlin. It’s gotta be. I recognize Danny from his cymbals.

AFTER: At first I thought this was a fretless bassist. Jeff is an incredible player. I actually just saw him a couple of days ago at the NAMM show playing with Danny on drums and Sid Jacobs on guitar. They played a Bill Evans song called “Very Early,” which is a really difficult song, and Jeff sounded amazing on it. He’s so expressive on the instrument. His articulation is so perfect. The way he moves his hands, it’s very clean and his playing is so melodic. I think there’s a lot of guitar players who wish that they could play and solo as melodically as Jeff does. Also, it’s very smart and wise of Jeff to have a bass player to play bass while he’s soloing, because it fills up that hole. Usually when a bass player solos, the groove drops out. But to have that second bassist grooving underneath really fills it in nicely.

“Expansion” (from Orchestrion, Nonesuch). Metheny, guitar, composer, all other instruments automated via orchestrionics. Recorded in 2009.

BEFORE: I think this is Pat Metheny [playing with] Larry Grenadier on bass and Brad Mehldau. Is that Gary Burton on vibes? This is very interesting.

AFTER: When I first heard about this project I thought it was going to be more like a Steve Reich compositional type of thing. I didn’t know that he was going to try to emulate a group. It’s really amazing. I immediately heard it as Pat. Funny, I couldn’t recognize any of the other players, but I recognize Pat. And I recognize the compositional depth of what he’s getting at. But he did an amazing job of programming here. That really sounds like a real drummer, for instance. Everything is programmed, I think, through the guitar controller or the computer. Every instrument has some type of mechanical rig. I’ve been meaning to hear this. Pat’s incredible. He continues to go forward. I will say that sound-wise, some of the instruments aren’t as clear as I’d like them to be from a mix point of view. I think that was one of the reasons why it was difficult for me to pick out who was playing it. But these are all machines. From an orchestral and compositional point of view, this is ideal for him. But I’m blown away by the cymbals … every touch on the cymbal. That took some serious programming. That, out of all of it, sounds the most real to me.

BEFORE: My first thought on this is that it could be someone like Alain Caron, an incredible and super-melodic player from Montreal. Nice ensemble playing here, beautiful way that the guitar player and the bassist are playing around each other, really listening. And overall as a trio, really nice interplay. I’m trying to place the [bass] player but can’t come up with a name. This could be Matt Garrison because of the high C string, the range of the instrument, and also because of the way he’s playing. Real tasty playing, influenced by Jaco, obviously, but has its own sound. Nice use of sustain notes. Is it Matt Garrison?

AFTER: I know Dominique, we’ve met. He’s a really tasty, fine player. He was in McLaughlin’s trio a few years ago. This guitar player is really nice. So is the drummer. I’ve listened quite a bit to Dominique but not enough to recognize his particular sound. He’s an incredible player. It’s one thing to have a lot of chops on bass, or any instrument, but it’s another thing to really play together and be musical with it. And he really is a good example of that, where he’s got phenomenal technique but is really extremely musical. He’s got an interesting right-hand technique. I think he uses all four of his fingers like a flamenco guitarist. A lot of players like Dominique, Richard Bona, Matthew Garrison and Hadrien Feraud have worked out all the combinations of playing with three and four fingers. But what I also like about Dominique is that he plays it from the bass point of view as opposed to just playing like a guitar player on bass. He’s a real bass player. I enjoyed that.

The rest of this column can be found in the April 2010 issue of JazzTimes. Originally Published April 1, 2010

In line with many resourceful jazz practitioners, Gilad Hekselman responded to the enforced isolation of the COVID-19 pandemic with a turning-lemons-to-lemonade attitude that ultimately eventuated … END_OF_DOCUMENT_TOKEN_TO_BE_REPLACED

It was the 1950s. Bebop had established itself as the new paradigm of jazz, but its newest popular variant, “cool jazz” or “West Coast jazz,” … END_OF_DOCUMENT_TOKEN_TO_BE_REPLACED

Session players have always been my thing. Not to take away from the singers or bandleaders or what have you, but I’m more interested in … END_OF_DOCUMENT_TOKEN_TO_BE_REPLACED

Walter Smith III has been burning the candle at both ends. As he connected with JazzTimes via Zoom from a New York City hotel room … END_OF_DOCUMENT_TOKEN_TO_BE_REPLACED