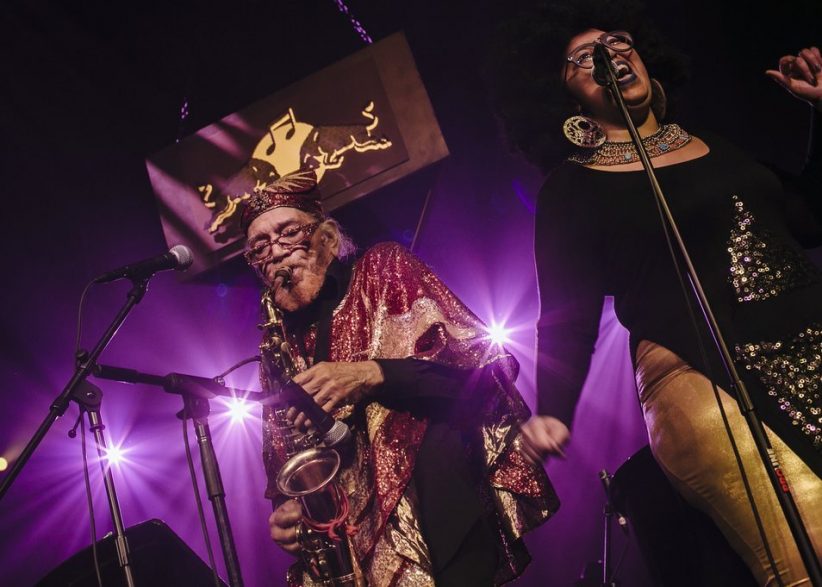 The Arkestra's Marshall Allen and Tara Middleton perform in Brooklyn in May 2016, as part of the Red Bull Music Academy concert “Where Spaceways Meet: A Night of Spiritual Jazz”

The final album recorded during Sun Ra’s Chicago era demonstrates why he was such an in-demand big-band arranger and writer. The all-originals set sits comfortably next to Ellington and Basie in sound and quality, with the notable exception of the tribal “Ancient Aiethopia.” Key tracks include the recorded debut of the longtime favorite “Enlightenment,” the brief and concise “Horoscope” and a raucous “Blues at Midnight” that offers great solos from Allen and others.

Reissued several times, Atlantis should be part of any serious discussion of Sun Ra’s greatest work, though it certainly isn’t his most acces-sible album. The bandleader solos extensively on the epic title track, which ranges from eerie to downright frightening, ambient to dense. Sun Ra and the Arkestra had dabbled in African music on previous releases, but their friendship with Nigerian drummer Babatunde Olatunji clearly influences the more accurate approximation of the continent’s music heard here.

This is as good a place as any to start one’s Sun Ra voyage. Arguably his most famous composition, the 21-minute title cut offers a little bit of everything from the Sun Ra oeuvre, with the gospel-tinged vocal refrain inviting all to join in. The five-song set is rounded out by the acoustic big-band jazz of “Images,” the exotica of “Discipline 33,” the dense free jazz of “Sea of Sound” and the cartoonish “Rocket Number Nine.”

Marshall Allen picks his own Sun Ra highlights, which span from the late ’50s to the late ’70s. Not in chronological order-linear thinking was never part of the band’s plan-the 20 cuts here include “Spontaneous Simplicity” (the first Sun Ra song Allen played on), unreleased tracks “Reflects Motion (Part 1)” and “Trying to Put the Blame on Me” (a wonderful solo piano piece), and an extended version of “Island in the Sun.”

Under the Direction of Marshall Allen
Babylon (In + Out, 2015)

This live CD/DVD combo documents a 2014 concert at Istanbul’s Babylon Club, the site of a memorable gig in 1990, while also celebrating Sun Ra’s centennial. Highlights include such classic Sun Ra originals as “Astro Black” and “Satellites Are Spinning,” in addition to a suitably off-kilter but on-point version of Hoagy Carmichael’s “Stardust.” The DVD includes three extra tracks, including Marshall Allen’s “Boma” and a fine cover of “Sometimes I’m Happy.”

In line with many resourceful jazz practitioners, Gilad Hekselman responded to the enforced isolation of the COVID-19 pandemic with a turning-lemons-to-lemonade attitude that ultimately eventuated … END_OF_DOCUMENT_TOKEN_TO_BE_REPLACED

It was the 1950s. Bebop had established itself as the new paradigm of jazz, but its newest popular variant, “cool jazz” or “West Coast jazz,” … END_OF_DOCUMENT_TOKEN_TO_BE_REPLACED

Session players have always been my thing. Not to take away from the singers or bandleaders or what have you, but I’m more interested in … END_OF_DOCUMENT_TOKEN_TO_BE_REPLACED

Walter Smith III has been burning the candle at both ends. As he connected with JazzTimes via Zoom from a New York City hotel room … END_OF_DOCUMENT_TOKEN_TO_BE_REPLACED