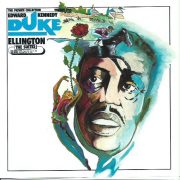 Fun fact: While Ellington was working on new material, he tested it out by bringing in the band to make not-for-release recordings. Many of them have been released since his death, including these two magnificent long-form commissions. 1968’s Degas Suite was intended as a film score for Racing World, a (never completed) film featuring the Impressionist artist’s horse-race works. Highlights include the solo “Piano Pastel” (in two versions), the exciting “Daily Double,” and the gorgeous, remarkably non-racing “Race.” Better still is The River, a ballet score that did receive a public performance behind the Alvin Ailey American Dance Theater in 1970. Like so much of Ellington’s extended work, it rotates between playful and somber, but whatever the mood, it engages a remarkably lithe rhythmic sense (with a generous helping of Norris Turney’s flute) and continues Ellington’s trademark cross-pollinations of his band’s sections. Both pieces are rendered as single tracks; The River, though, often turns on a dime, making it difficult to distinguish between new or multi-part movements. Nevertheless, it was eminently worthy of release in its day, as was The Degas Suite, despite whatever reservations prevented Ellington from unleashing them on the world.

This year marks the 50th anniversary of JazzTimes—and you can help us celebrate. We’re compiling a feature for our upcoming 50th-anniversary issue on the top … END_OF_DOCUMENT_TOKEN_TO_BE_REPLACED

“She was so out, and so in,” wrote pianist and JazzTimes columnist Ethan Iverson of Geri Allen. “In the mid-’80s, very few could say they … END_OF_DOCUMENT_TOKEN_TO_BE_REPLACED

This being the “Renegades” issue [May 2020], it’s an absolute given that you’d find William Hooker here. The prolific drummer, poet, and composer has gone … END_OF_DOCUMENT_TOKEN_TO_BE_REPLACED