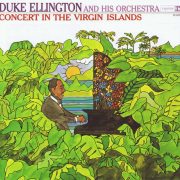 There is no concert to speak of on Concert in the Virgin Islands; it’s a studio album. It does, however, contain music inspired by the Ellington orchestra’s April 1965 concerts on St. Croix and St. Thomas. Unsurprisingly, this music is primarily heard in the Virgin Islands Suite, a four-movement piece that opens the album. There are three more new compositions—all, like the suite, credited to Ellington/Strayhorn—along with four standbys (including fresh takes on “Things Ain’t What They Used to Be” and “Chelsea Bridge”). Even with so much new music, however, Concert in the Virgin Islands is primarily a smorgasbord of the band’s best soloists. The suite features Jimmy Hamilton’s clarinet, Ray Nance’s violin, and Cat Anderson’s trumpet. (His showstopper “Jungle Kitty” would have been a thrilling addition to Ellington’s regular live set.) Other pieces give the spotlight to Johnny Hodges, Paul Gonsalves, Buster Cooper, Lawrence Brown, and Cootie Williams. It’s a splendid reminder that Duke Ellington was so much more than his piano and pen; he was also his musicians.

We’ve had recorded music for a little over 100 years. Before that, if you wanted to hear music, you had to have someone physically present, … END_OF_DOCUMENT_TOKEN_TO_BE_REPLACED

When I started listening to jazz, as a kid growing up in rural Ohio, I got pretty lucky choosing my first few records. A Dizzy … END_OF_DOCUMENT_TOKEN_TO_BE_REPLACED