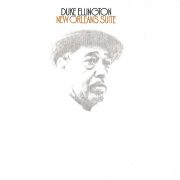 Promoter George Wein founded what is now the New Orleans Jazz & Heritage Festival in 1970, and commissioned Ellington to write an extended work for its debut. It introduces a surprising amount of new territory for the 71-year-old visionary, including an organ groove (courtesy of Wild Bill Davis, who would do a few other projects with the band) and flute features (for Norris Turney, Ellington’s first and only solo flutist). It also shows a heretofore unheard understanding of New Orleans’ musical culture, with portraits of Wellman Braud (featuring a suitably penetrating bass ostinato) and Louis Armstrong (Cat Anderson demonstrating an uncanny grasp of Pops’ trumpet language). But in the end, this is a series of impressions as filtered through the Ellingtonian worldview, not a hard-and-fast Dixieland pastiche. What was written for a first was incidentally also a last: New Orleans Suite contains Johnny Hodges’ final recordings.

What better way to celebrate the 50th anniversary of a music magazine than by making a top-50 list? Given how much time we’re spending at … END_OF_DOCUMENT_TOKEN_TO_BE_REPLACED

He loved the nickname “Dizzy,” and he did everything he could to live up to it. The hyperactive stage antics, the puffed cheeks, the distinctive … END_OF_DOCUMENT_TOKEN_TO_BE_REPLACED