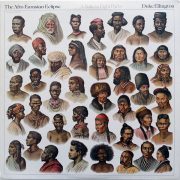 Released posthumously, The Afro-Eurasian Eclipse had been premiered at the Monterey Jazz Festival in 1970 and recorded the following year. The concept of the eight-part suite comes from fabled media scholar Marshall McLuhan: “Mr. McLuhan says that the whole world is going oriental and that no one will be able to retain his or her identity, not even the Orientals,” Ellington explains at the beginning of the album. “And of course we travel around the world a lot, and in the last five to six years we too have noticed this thing to be true.” As usual, much of the cross-cultural influence is latent: There’s nothing particularly Chinese about “Chinoiserie,” and there’s no didjeridoo on “Didjeridoo.” On the other hand, there is truth in advertising on “Gong,” which features (overdubbed) Chinese gongs, and on “Acht O’Clock Rock,” which packs as hefty a backbeat as any rock & roll record of the era. It’s a highly rhythmic and compelling album, which leaves many unanswered questions (the song titles were likely left incomplete before Ellington’s death, for one) and suggests intriguing new possibilities.

What better way to celebrate the 50th anniversary of a music magazine than by making a top-50 list? Given how much time we’re spending at … END_OF_DOCUMENT_TOKEN_TO_BE_REPLACED

He loved the nickname “Dizzy,” and he did everything he could to live up to it. The hyperactive stage antics, the puffed cheeks, the distinctive … END_OF_DOCUMENT_TOKEN_TO_BE_REPLACED