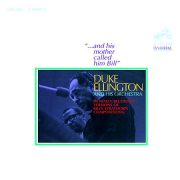 Some controversy continues to shroud the nature of the relationship between Ellington and Billy Strayhorn, his longtime deputy who died of cancer in May 1967. But the love shining through every performance on …And His Mother Called Him Bill, Ellington’s posthumous exploration of Strayhorn’s compositions, can’t be faked. Johnny Hodges’ sweet, sad treatment of “Blood Count” is justly famous; alongside the kicky “U.M.M.G. (Upper Manhattan Medical Group),” it demonstrates Stray’s ability to turn his own medical condition into art. Hodges shines again on the exquisite “After All”; trumpeter Cootie Williams cooks on “Rock Skippin’ at the Blue Note”; and their fellow veterans Lawrence Brown and Paul Gonsalves take the spotlight on “Rain Check,” one of Strayhorn’s most memorable themes. The most moving moment on the album, and its most celebrated, is the one with which it ends—courtesy of Ellington himself. The leader gives a hushed solo piano rendition to “Lotus Blossom,” as his band members are heard in the background chattering and packing up their instruments. “Lotus Blossom” is already surpassingly lovely in its own right; in Ellington’s lone hands, its emotional impact becomes nearly unbearable.

What better way to celebrate the 50th anniversary of a music magazine than by making a top-50 list? Given how much time we’re spending at … END_OF_DOCUMENT_TOKEN_TO_BE_REPLACED

He loved the nickname “Dizzy,” and he did everything he could to live up to it. The hyperactive stage antics, the puffed cheeks, the distinctive … END_OF_DOCUMENT_TOKEN_TO_BE_REPLACED