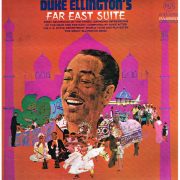 This one is first on most people’s lists of Ellington’s late masterpieces. It’s hard to quarrel with The Far East Suite—except for the fact that its subject matter is mostly the Middle East, not the Far East. (Ellington and his orchestra had toured the Arab world and the Indian subcontinent for the U.S. State Department in 1963.) That’s how we get “Isfahan,” the Johnny Hodges vehicle—named for a city in Iran—that is often regarded as Billy Strayhorn’s greatest composition. (He had actually written it years before and titled it “Elf,” but it was repurposed when the band needed to fill time on the LP.) The Far East Suite contains two other Strayhorn marvels: the simultaneously delicate and solid “Bluebird of Delhi (Mynah)” and the Harry Carney feature “Agra.” Not to be outdone, Ellington wrote the stirring opener “Tourist Point of View,” the hard-swinging “Depk,” the nearly soul-jazz “Blue Pepper,” and the suite’s one true excursion into the Far East, the piano feature “Ad Lib on Nippon.” It really is an embarrassment of riches. Two years before, the Pulitzer Prize committee had rejected an endorsement for a special award for Ellington; The Far East Suite, if they were listening, surely made them sorry.

We all know the big names of Blue Note Records—Coltrane, Rollins, Monk, Davis, Silver, Blakey, Hancock, Shorter, and so on—as well we should. But what … END_OF_DOCUMENT_TOKEN_TO_BE_REPLACED

Not only is Jackie McLean my musical hero, but in many ways he is my musical father. I met him as a senior in high … END_OF_DOCUMENT_TOKEN_TO_BE_REPLACED

During the Blue Note at Sea cruise in late January, Don Was, famed record producer and president of Blue Note Records, sat down with one … END_OF_DOCUMENT_TOKEN_TO_BE_REPLACED

The crisis is upon us. The music community is upended. Each of us reprioritizes what we do and re-navigates how we do it. David Gilmore, … END_OF_DOCUMENT_TOKEN_TO_BE_REPLACED