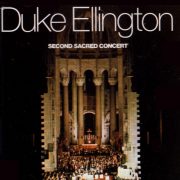 “I regard this concert as the most important thing I have ever done,” proclaimed Ellington at the end of his life. The debate over the relative importance of his works will never end, but Second Sacred Concert is unquestionably the most ambitious of the three Concerts of Sacred Music, and indeed one of the most ambitious works in all of Ellingtonia. Its 155-minute corpus extends his orchestra to 22 pieces (including vocalists), then adds four full choirs. As one might imagine, it’s highly driven by lyrics—some of them bypassing the choral multitudes for the singular person of the operatic Swedish vocalist Alice Babs (an Ellington discovery). The choirs get “Supreme Being,” in which Ellington unveils a new technique: spoken (or at least unpitched) but nonetheless melodic recitative that functions like incantation. You can also hear it on “Something About Believing,” which introduces the electric piano into his band’s sonic palette. That electric piano merges with Babs on the wordless “T.G.T.T.,” which both harks back to the early days of “Creole Love Call” and blazes a new path with its through-composed melody. And all of this is done with tremendous sonority that was clearly designed to be heard in the cavernous churches in which it was performed, adding yet another layer to Ellington’s genius. (Note: The CD and streaming versions of Second Sacred Concert omit two tracks that were released on the original vinyl edition.)

This year marks the 50th anniversary of JazzTimes—and you can help us celebrate. We’re compiling a feature for our upcoming 50th-anniversary issue on the top … END_OF_DOCUMENT_TOKEN_TO_BE_REPLACED

“She was so out, and so in,” wrote pianist and JazzTimes columnist Ethan Iverson of Geri Allen. “In the mid-’80s, very few could say they … END_OF_DOCUMENT_TOKEN_TO_BE_REPLACED

This being the “Renegades” issue [May 2020], it’s an absolute given that you’d find William Hooker here. The prolific drummer, poet, and composer has gone … END_OF_DOCUMENT_TOKEN_TO_BE_REPLACED