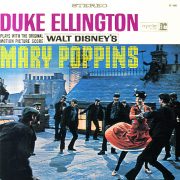 Not a single original tune to be found on this album. It was all composed by the brothers Sherman for the 1964 Disney musical that we all know and love. Why, then, is it included among the late works of jazz’s greatest composer? Because he is also jazz’s greatest arranger (along with Strayhorn), and it’s hard to put too fine a point on how hip these arrangements are even 55 years later. “A Spoonful of Sugar” sets the tone with spotlights on all the saxophonists. “Let’s Go Fly a Kite” has a laid-back cool that persists even as trumpeter Cat Anderson wails on his plunger mute, while “Sister Suffragette” is sultry to the point of humorous. “The Perfect Nanny,” rendered as a feature for clarinetist Jimmy Hamilton, is heartbreaking. Any Ellington fan is justifiably excited by the maestro’s own writing, but it would be a crime to neglect his gift for making other composers’ work his own.

We’ve had recorded music for a little over 100 years. Before that, if you wanted to hear music, you had to have someone physically present, … END_OF_DOCUMENT_TOKEN_TO_BE_REPLACED

When I started listening to jazz, as a kid growing up in rural Ohio, I got pretty lucky choosing my first few records. A Dizzy … END_OF_DOCUMENT_TOKEN_TO_BE_REPLACED