This list began life as merely “Late Ellington”—inclusive of everything he did after his 1956 triumph at Newport. An informal survey of jazz lovers and musicians quickly rendered that too easy: Who can argue with Such Sweet Thunder, or Money Jungle, or the collaboration with John Coltrane?

Much less consensus surrounded Duke’s final decade, however—and few respondents even knew the recording that’s listed below as No. 1.

It doesn’t take long to realize how much superb material is included in that 10-year bracket, though. Among the items that didn’t make the cut here: Duke’s 70th-birthday concert from 1969; countless other live performances from around the world (including the acclaimed Yale and Whitney concerts); This One’s for Blanton, his 1972 duet session with bassist Ray Brown; and his “Big 4” date with Brown, Joe Pass, and Louie Bellson. Ellington was (and is) truly a bottomless treasure chest.

The 10 albums listed here include lesser-known jewels along with legendary items. All of them are masterpieces: the best 10 from the last 10. 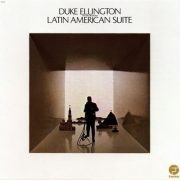 Full disclosure: Latin American Suite is this writer’s favorite jazz album of all time. Recorded primarily in 1968 (with one track, “Tina,” done in 1970) and originally titled Mexicanticipation, it’s Ellington’s first suite after the death of Billy Strayhorn. It may well be his attempt to reassert his own identity in the wake of that loss. For one thing, it’s the most piano-intensive orchestral project he’d done in quite some time, with a prominent piano solo or section on nearly every piece. It’s also remarkably ambitious. Like The Far East Suite, it doesn’t really attempt to imitate or even much incorporate its titular influence (though it does do so rhythmically, to a greater degree than on Far East). Nonetheless, it is rich in ideas, with “Oclupaca” (read it backwards) fusing 12-bar blues and 32-bar song; “Chico Cuadradino” shifting between a bossa nova-inspired rhythm and a straight-up rock one (his answer to the rising jazz fusion wave?); and “Eque” driven by motifs that provide Johnny Hodges with one of his loveliest features. Then there’s the centerpiece, “The Sleeping Lady and the Giant Who Watches Over Her,” in which Ellington stitches together no less than 10 different themes. It’s one of the most overlooked jewels in the jazz canon.

Ever since I was in the 7th grade, I have had a passion for jazz. I have always listened to and enjoyed a wide variety … END_OF_DOCUMENT_TOKEN_TO_BE_REPLACED

“My overall goal is trying to figure out how to connect the languages of jazz and classical to make an interesting and engaging performance, and … END_OF_DOCUMENT_TOKEN_TO_BE_REPLACED

We calculated our top 40 new releases of 2022 based on year-end lists by our writers. They were asked to choose the 10 best new … END_OF_DOCUMENT_TOKEN_TO_BE_REPLACED

We calculated our top 10 historical/reissue recordings of 2022 based on year-end lists by our writers. They were asked to choose the five best historical … END_OF_DOCUMENT_TOKEN_TO_BE_REPLACED