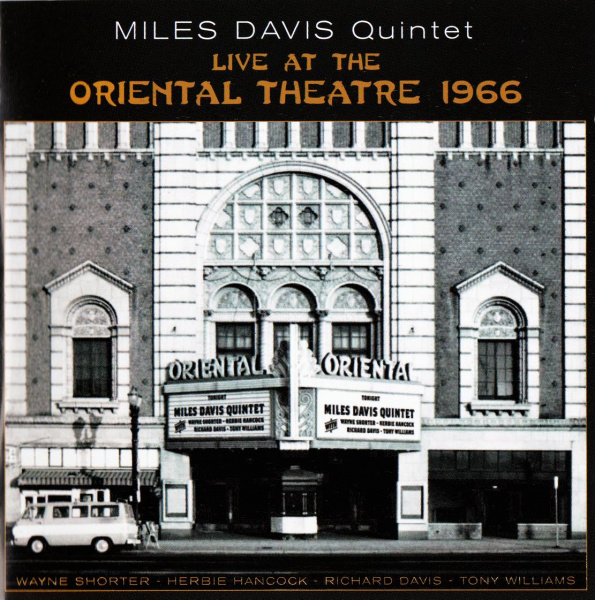 Cheating but not cheating, because though this is a bootleg, it exists and is there for you to listen to as easily as you might listen to anything else in our compendium. We have (most of) the Second Great Quintet—Davis’ best band, arguably the best small band there has been in these United States, in any genre—out West. 1966 is a special year for the Quintet. They get a footing in 1964 (and I am scolding myself for leaving out the Philharmonic Hall tape of Valentine’s Day from that year) and jell throughout 1965, but come the end of that annum, they emerge as all-but-official chamber musicians who go around and play for the enlightened folk. It’s concert-hall music, a kind of post-classical classical. The venue, an old-school movie theater in Portland, Oregon, with baroque furnishings, suits the spirit of the music fine. Richard Davis takes the place of Ron Carter on bass, but note how Davis locks his groove, and the band’s groove, to that of wunderkind drummer Tony Williams. People think Davis was arrogant. He wasn’t. He knew what he was and could do. And what he cared about was the sound, more than anything, even if he didn’t immediately come across as the “star” player. He was so good that he didn’t have to.

In line with many resourceful jazz practitioners, Gilad Hekselman responded to the enforced isolation of the COVID-19 pandemic with a turning-lemons-to-lemonade attitude that ultimately eventuated … END_OF_DOCUMENT_TOKEN_TO_BE_REPLACED

It was the 1950s. Bebop had established itself as the new paradigm of jazz, but its newest popular variant, “cool jazz” or “West Coast jazz,” … END_OF_DOCUMENT_TOKEN_TO_BE_REPLACED

Session players have always been my thing. Not to take away from the singers or bandleaders or what have you, but I’m more interested in … END_OF_DOCUMENT_TOKEN_TO_BE_REPLACED

Walter Smith III has been burning the candle at both ends. As he connected with JazzTimes via Zoom from a New York City hotel room … END_OF_DOCUMENT_TOKEN_TO_BE_REPLACED