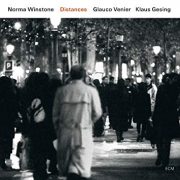 9. Norma Winstone: Distances (2008)
British singer Norma Winstone couldn’t sound like anyone else if she tried. Her husky, whispery voice demands a spacious approach from whomever happens to be accompanying her. On Distances, that’s pianist Glauco Venier and multi-reedist Klaus Gesing. Their long tones, resonance, and harmonic complexity (with frequent dissonances) create a looming shadow over the entire proceeding—a sort of comforting spookiness. Notably, the two accompanists also do the bulk of the improvising: Winstone’s trademark wordless improvisations are few and far between on Distances. Instead, the album draws its power from her dulcet timbre, her flawless diction and phrasing, and her dramatic use of economy; nobody makes an entrance like Norma Winstone.

This year marks the 50th anniversary of JazzTimes—and you can help us celebrate. We’re compiling a feature for our upcoming 50th-anniversary issue on the top … END_OF_DOCUMENT_TOKEN_TO_BE_REPLACED

“She was so out, and so in,” wrote pianist and JazzTimes columnist Ethan Iverson of Geri Allen. “In the mid-’80s, very few could say they … END_OF_DOCUMENT_TOKEN_TO_BE_REPLACED

This being the “Renegades” issue [May 2020], it’s an absolute given that you’d find William Hooker here. The prolific drummer, poet, and composer has gone … END_OF_DOCUMENT_TOKEN_TO_BE_REPLACED