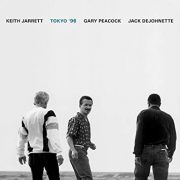 6. Keith Jarrett: Tokyo ’96 (1998)
Truth be told, Keith Jarrett is far too prolific for any one of his ECM albums to stand in for all of them. The Köln Concert is his most famous and bestselling; his many other solo recordings have a tremendous amount to say; and both his American and European Quartets did arguably their best work for the label. Tokyo ’96, recorded with his “Standards Trio” (bassist Gary Peacock and drummer Jack DeJohnette), is a prime example of the band that has dominated the last 20 years of Jarrett’s musical career. It clearly and cleanly features his pristine single-note-line approach, his personal harmonic language, his love of ostinato and motif (check out both “I’ll Remember April” and “Autumn Leaves”), his swing (“Billie’s Bounce” is astonishing), and, for better or for worse, his self-accompaniment with vocal yelps and squawks. It also showcases perhaps better than any other recording his superlative, uncanny chemistry with this trio.

This year marks the 50th anniversary of JazzTimes—and you can help us celebrate. We’re compiling a feature for our upcoming 50th-anniversary issue on the top … END_OF_DOCUMENT_TOKEN_TO_BE_REPLACED

“She was so out, and so in,” wrote pianist and JazzTimes columnist Ethan Iverson of Geri Allen. “In the mid-’80s, very few could say they … END_OF_DOCUMENT_TOKEN_TO_BE_REPLACED

This being the “Renegades” issue [May 2020], it’s an absolute given that you’d find William Hooker here. The prolific drummer, poet, and composer has gone … END_OF_DOCUMENT_TOKEN_TO_BE_REPLACED