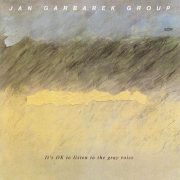 5. Jan Garbarek Group: It’s OK to Listen to the Gray Voice (1984)
Like Terje Rypdal (see #3), tenor and soprano saxophonist Garbarek (another Norwegian) is an emblematic voice of ECM’s Eurojazz. His quartet on the intriguingly titled It’s OK to Listen to the Gray Voice uses another such voice in German bassist Eberhard Weber. The remaining two players are Americans who are also prolific members of the ECM stable: drummer Michael DiPasqua and guitarist David Torn. The latter stands alongside Garbarek as the key member of this band. As much as the saxophonist does to channel European atmospherics with his long, clear tones, Torn might do even more with his reverb-dripping, often snarling electric guitar lines on the rugged “The Crossing Place” and the celebratory “Mission: To Be Where I Am.” That said, there is nothing more haunted and affecting on the record than the sound of Garbarek’s unaccompanied, double-tracked, and intertwined soprano saxes on the closing “I’m the Knife Thrower’s Partner.”

When I started listening to jazz, as a kid growing up in rural Ohio, I got pretty lucky choosing my first few records. A Dizzy … END_OF_DOCUMENT_TOKEN_TO_BE_REPLACED

You are reading the words of an Andrew Hill fanatic. The kind who has spent years poring over his music, track by track. And why … END_OF_DOCUMENT_TOKEN_TO_BE_REPLACED