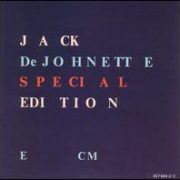 4. Jack DeJohnette: Special Edition (1980)
Nearly 40 years later, there are still very few (if any) albums quite like the first Special Edition LP. Its powerhouses at first seem to be David Murray and Arthur Blythe and their equally free-ranging yet equally distinctive tenor and alto saxes (respectively). They engage in lovely, sympathetic harmonies on “Central Park West”; shouting matches on “Zoot Suite,” also one of DeJohnette’s most ambitious and memorable compositions; and weird, metamorphosing counterpoint on “Journey to the Twin Planet.” But the real batteries charging the album are bassist/cellist Peter Warren (who can be forgiven for using the au courant bass direct microphone) and DeJohnette, who, when not moving over to piano or melodica, displays the hard-edged vocabulary that became particularly influential within the ECM sphere. The music ventures through old-time swing, modal jazz, bebop, and free blowing, using several of the loft-jazz era’s heavyweights to exemplify its ideas.

In 2020, to celebrate JazzTimes’ 50th anniversary, we made a bold (some would say foolhardy) call: the top 50 jazz albums of the past 50 … END_OF_DOCUMENT_TOKEN_TO_BE_REPLACED

In 2020, to celebrate JazzTimes’ 50th anniversary, we made a bold (some would say foolhardy) call: the top 50 jazz albums of the past 50 … END_OF_DOCUMENT_TOKEN_TO_BE_REPLACED