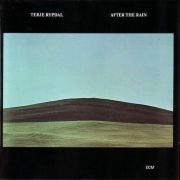 3. Terje Rypdal: After the Rain (1976)
ECM’s most important contribution was probably its exposure of European jazz musicians. For whatever reason, Scandinavians tended to become the label’s standard bearers; Terje Rypdal, a Norwegian guitarist steeped in jazz fusion, was one of them. It was Rypdal who best harnessed the atmospherics that ECM was becoming known for. On After the Rain, he plays not only the guitars but pianos, synthesizers, soprano saxophone, flute, and a variety of bells. The only other musician on the date was Rypdal’s then-wife, vocalist Inger Lise Rypdal. The resulting series of soundscapes would pave the way for what became new age (another realm in which ECM made major inroads), but it’s also stirring, exquisite music in its own right, with superb examples of improvisation from Rypdal on several of his axes.

When I started listening to jazz, as a kid growing up in rural Ohio, I got pretty lucky choosing my first few records. A Dizzy … END_OF_DOCUMENT_TOKEN_TO_BE_REPLACED

You are reading the words of an Andrew Hill fanatic. The kind who has spent years poring over his music, track by track. And why … END_OF_DOCUMENT_TOKEN_TO_BE_REPLACED